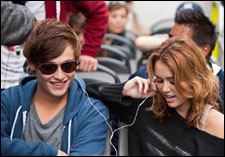 Nupur Barua / fullhyd.com
EDITOR RATING
4.0
Performances
Script
Music/Soundtrack
Visuals
5.0
5.0
7.0
6.0
Suggestions
Can watch again
No
Good for kids
No
Good for dates
No
Wait for OTT
No
In an era of remakes, it comes as no surprise that LOL is based on a French movie of the same name, from the year 2008. What is unique is that the director (Liza Azuelos) is the same for both movies, and what is even more unique is that the French film was based on another French movie, La Boum, released in 1980.

LOL is not about laughing out loud (in fact, there are no laughs), but about a girl named Lola (Miley Cyrus), whose extremely short name is further shortened to Lol. A voiceover (Lol's) tells us what to expect from the new school year, and from the movie as well.

Lol has two best girlfriends, one boyfriend, and one close friend who is a boy. She lives with her mother (Demi Moore), and her younger brother and sister, and they are all so close that the teenage Lol does not think twice about walking naked into a bathroom where her mother and sister are having a bath together, naked). Lol's parents are divorced, but that does not stop them from sneaking in a few illicit nights of pleasure, with each other, now and then.

Just when you think there's nothing to worry about, Lol's boyfriend Chad (George Finn) confesses that he had a summer fling. Lol breaks up with him, and later realises that she likes her best friend, Kyle (Douglas Booth). And then comes in touch with her sexual self, and also experiments with soft drugs, all in the name of coming of age.

That is all there is to the story, really. Not so complicated, but, for some reason, the director thought it best to over-dramatise every irrelevant detail of this young girl's life, thus making her the least likeable teen character in a high school movie so far. Also, the love affair between the two leads is so insipid and immature, even by teenage standards, that even the mushiest romantic comedy enthusiast will cringe.

Miley Cyrus has never been anything but a celebrity, what with the whole Hannah Montana franchise and her songs. What she has not learned to do is act, unfortunately - at least, not serious acting. Making weird faces is the closest she can come to portraying the angst of a teenager. To be fair, the character she plays in this movie is flimsily etched, and she ends up looking more schizophrenic than a rebel.

Demi Moore's botox dosage over the past few years has rendered her incapable of emoting with her face. She is fit, though, and tries her best to play the cool mother, who is also paranoid about issues that she thought she could handle as a parent, such as condoms and drugs in her daughter's bag.

Jay Hernandez is a dream as a cop, and it is a pity that Hollywood does not pay him too much attention. He is the only one who looks like he had fun playing his small role in this rather pointless movie.

Of the other actors, Ashley Hinshaw as Emily, Lol's best friend, is quite promising. As is George Finn. Ashley Green is wasted as the school slut, and one may wonder how she accepted this non-consequential role, especially after her part in the Twilight series.

Douglas Booth is the lead actor, of course. He looks least interested in the movie, and in Miley/Lol.

Despite all of the above, the movie has its memorable moments, like the sequences where Lol's mother gets together with her friends and chats, without inhibitions, on sex, drugs and rock-and-roll. Fisher Stevens appears in a small role as one of the friends, and his performance is the most sincere of the lot, albeit wasted in a movie like this.

The portrayal of a zealously religious French family that is obsessed with Joan of Arc, or a trigonometry teacher whose sex appeal draws awed girls to his class, or even passing off Lol as a deaf mute - all these little sub-plots and stereotypes could have been done away with. They add nothing to the story. The production design is nothing to write home about, neither are the costumes.

Chad and Kyle are a part of a band, and they perform live here and there - and that means more than one soulful song. While the music is predictable and uninspired, it becomes a welcome distraction from the conspicuous absence of a plot and the amateur performances.

Skip this one, even if you are a teenager who loves either Hannah Montana or Douglas Booth. Some things are best left unexplored, and LOL (which, in this case, apparently stands for lots of love) is definitely one of them.
Share. Save. Connect.
Tweet
LOL - LAUGHING OUT... SNAPSHOT
LOL - LAUGHING OUT LOUD SNAPSHOT

ADVERTISEMENT
This page was tagged for
LOL - Laughing Out Loud english movie
LOL - Laughing Out Loud reviews
release date
Demi Moore, Miley Cyrus
theatres list
Follow @fullhyderabad
Follow fullhyd.com on
About Hyderabad
The Hyderabad Community
Improve fullhyd.com
More
Our Other Local Guides
Our other sites
© Copyright 1999-2009 LRR Technologies (Hyderabad), Pvt Ltd. All rights reserved. fullhyd, fullhyderabad, Welcome To The Neighbourhood are trademarks of LRR Technologies (Hyderabad) Pvt Ltd. The textual, graphic, audio and audiovisual material in this site is protected by copyright law. You may not copy, distribute, or use this material except as necessary for your personal, non-commercial use. Any trademarks are the properties of their respective owners. More on Hyderabad, India. Jobs in Hyderabad.