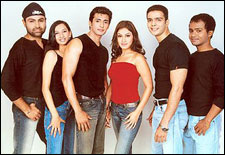 Rohit Murari / fullhyd.com
EDITOR RATING
5.0
Performances
Script
Music/Soundtrack
Visuals
NA
NA
NA
NA
Suggestions
Can watch again
NA
Good for kids
NA
Good for dates
NA
Wait for OTT
NA
There are times when you enter a theater that is more sparsely populated than the Western Sahara. You resign yourself to watching the movie anyway, despite better judgement. But as the movie plays, on you realize that all those who did not come in are missing out on something you would gladly do anything to miss.

This movie, supposedly, has been made after considerable Market Research. Isn't supposedly a wonderful word? Supposedly, as per a certain big brother, Pakistan is a democracy.

Sandra (Namrata Shirodkar), sometimes, runs a café ¦requented by students of two schools - Valley High (for the rich and famous) and Bharati School (for the not so fortunate). When she is not running the café¬ she is giving us a generous view of her derriere. Well, at least she has twice as much purpose as Kabir (Sunny Deol), whose singular objective in life is to impress a bunch of highly impressionable sixteen-year-old women by parking his derriere on a Harley Davidson.

Dev (Yash Pandit) is our hero, Suhana (Manjari Phadnis) is our heroine, Ranveer (Caran Kapoor) is our villain, and Sanjana (Aparna Kumar) is our vamp. Again supposedly, they are all 12th standard students. So what if the men have to shave more often than a gorilla would if gorillas were in the habit of shaving? And what if the women are better endowed than Pamela Anderson?

Since the movie uses fundas of Market Research, we management geniuses at fullhyd.com thought we should analyze the movie on the fundas of a cause-and-effect relationship. So here goes:That, about, sums up the story. Save for Sunny Deol, no actor in the movie seems to understand that to be an actor, it is imperative that you act. The music is good, though. But, did the choreographers really have to make Sunny dance? Why is the world so cruel?

Basically, the film is a rehash of the Aamir Khan starrer Jo Jeeta Wohi Sikander. For Sanju (Aamir Khan) we have Dev, for Anjali (Ayesha Jhulka) we have Suhana, for Shekhar (Deepak Tijori) we have Ranveer and for Devika (Pooja Bedi) we have Sanjana. The odd man out, and we mean this literally, is Kabir.
Share. Save. Connect.
Tweet
ROK SAKO TO ROK... SNAPSHOT
ROK SAKO TO ROK LO SNAPSHOT