Slick leather pants make a flashy comeback as Reloaded hits the screens in a summer full of lumpy comic-book adaptations. And while the protagonist doesn't quite swing off buildings or do a jig while collecting berries, man, does he kick butt.

For the uninitiated, Reloaded flashes to earth in the future, where the planet's under the clutches of artificial intelligence called The Matrix. Human brains are fed the impression that they inhabit 21st century earth, all the while serving as energy sources for their masters. But there is more than what meets the eye... a rebel band under Morpheus (Lawrence Fishbourne) has escaped and identified the one man, the messiah, who will serve for the rage against the machine. And that being none other than poker face, ex-Point Breaker, Neo (Keanu Reeves). 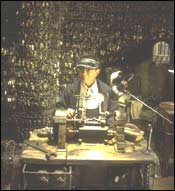 Anyway, the basic premise of Reloaded is that the machines discover the location of Zion and are now on their way to zap this zit off the face of the place. But before that can happen, Neo, Morpheus and the motley crew must put their collective cells together to find a way to save that from happening. And of course, all this is possible with a little help from an oracle and a character, Keymaker (Randall Duk Kim).

At this point, it must be pointed out that the flick goes high like on a sniff of hash, and you're left with some super-slick action sequences. But then again, that's the primary reason you're in the halls. Reloaded does have this summer's best action. The freeway car chase on the highway makes you feel like a dog hanging out of a car window... it's exhilarating, when not serving as an ad for Cadillacs. 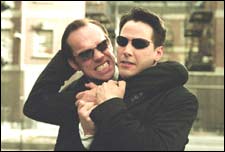 Then, the re-entry of self-duplicating Captain Smith (here's a fella who's never in need of a photo-copying machine) is also a high point. The action sequence between Neo and Capt. Smith induces vertigo, and makes you clutch your bag of popcorn desperately. But that aside, do action sequences really save a film? In this case, not really. They may pin you down to the leather, but what about the pseudo-intellectual crap that the characters are spouting?

We know that asking Keanu Reeves to mouth anything more than "get off the bus'' would be a huge risk needing cover by a triple policy, but what in the name of a garbage can is "I know what I know because it is my purpose" (Keymaker-speak)? Duh! Futuristic fury coupled with neo-medieval oriental tripe? This sort of powwow makes as much sense as a Pekinese made to march on a parade. 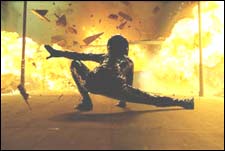 I think the Wachowski Brothers should have diligently left the flapping lines firmly at home and do what they do best... hang the camera and take a 360 degree turn. But unfortunately for Reloaded, adding more action and bullets doesn't take the focus off the ultra-slender storyline.

But what makes the worth while is Keanu zooming up buildings, Keanu shielding bullets with an open palm, Keanu making out with Trinity and umm... did I say Keanu one too many times? Anyway, the Wachowski Brothers may have just scratched the surface of ingenuity when it comes to the script, but you have to hand it to them for having popped up the most fantabalistic-action flick for a while to come at least. And while the cash registers belts out a never-ending anthem, all you can do this summer is watch the flick gleefully conquer the matrix of the box-office.
Share. Save. Connect.
Tweet
MATRIX RELOADED (ENGLISH) SNAPSHOT
See Matrix Reloaded (English) full details
MATRIX RELOADED (ENGLISH) USER REVIEWS
1 - 5 OF 5 COMMENTS
POSITIVE  |  NEGATIVE |  NEWEST  |  OLDEST  |  MOST HELPFUL  |  LEAST HELPFUL
USER RATING
7.8
37 USERS
Performances
Script
Music/Soundtrack
Visuals
NA
NA
NA
NA
Can watch again - NA
Good for kids - NA
Good for dates - NA
Wait for OTT - NA
Subhash on 19th Sep 2019, 8:23am | Permalink
Nice
The Believer on 25th Jun 2003, 6:25pm | Permalink
Ms.Kashyap... there's more to the world than what meets the eye! And the "Matrix Reloaded" is no exception. Have you ever wondered how was Neo able to zap those sentinels outside of the Matrix??(This ain't Rajnikant or a Mithunda movie where things happen just for the heck of it) Or why the Merovingian(the French bloke) was able to see code very much the same manner as Neo?? And how come the Seraph (The guy protecting the Oracle) coded in golden when the rest of the Matrix is in green? And why did Persephone have to kiss Neo, and then she says to Trinity that she envies her but such THINGS are not meant to last?!!!
RATING
8
Occasional Critic on 19th Jun 2003, 5:19pm | Permalink
Ms Kashyap: Not all movies are created equal. There are some that require you give your noggin a workout. That is their purpose. If the "I know what I know..." bit was ambiguous, then Here's something to really "BAKE YOUR NOODLE". Is Zion real or part of the matrix? Whose side is the Oracle on? Why are the inhabitants of Zion multiracial while those in the matrix mostly white ? Remember there is no spoon.
RATING
8
Vivek Vivek on 16th Jun 2003, 11:16am | Permalink
It's kick-punch, still camera spin, cause and effect funda, choice, reason, boom-bang, more of camera spin, Ducati Ad insert, burning buildings, weird machines, cause effect and "to be continued". You end up wondering why this movie was made. All the mind-blowing fundas are done with in Matrix. Matrix Reloaded is an unwanted extension. I am sure even the Matrix revolutions would have the same fantastic overdose.
RATING
6
Lost Loon on 14th Jun 2003, 7:47pm | Permalink
It's Not "I know what I know because it is my purpose" , but "I know what I know because i must know" . equally meaningless. anyway, great review. for me the worst funda in the whole movie was the supermanish 'up, up and away' pose that neo puts on b4, umm.., flying. yuck!!
RATING
4
LEAVE A COMMENT
fullhyd.com has 700,000+ monthly visits. Tell Hyderabad what you feel about Matrix Reloaded (English)!
MORE MOVIES
Latest Reviews
Sammathame
Jugjugg Jeeyo
Godse
Nikamma
Virata Parvam
more
Ante Sundaraniki
Janhit Mein Jaari
Jurassic World: Dominion
Jurassic World: Dominion (Te...
Jurassic World: Dominion (Hi...
Vikram
MAJOR
MAJOR (Hindi)
F3: Fun and Frustration
Anek
Contemporary Reviews
Spy Kids 3D - Game Over
Dongodu
Lakeer
Shambhu
Simharaasi
more
Deewar
The Haunted Mansion
Brother Bear
Avunu... Valliddaru Istapadd...
Action No 1
Bazaar
Spiderman 2
Masti
The Lord Of The Rings: The R...
Random Reviews
Fiza
Awarapan
Taxi No 9 2 11
Double Cross
Quantum Of Solace (Telugu)
more
Striker
Faltu
Paan Singh Tomar
Mr. Manmadha
Pompeii (3D)
Dolly Ki Doli
X-Men: Apocalypse
C/o Surya
X-Men: Dark Phoenix
Jugjugg Jeeyo
SEARCH MOVIES
Dissatisfied with the results? Report a problem or error, or add a listing.
ADVERTISEMENT
SHOUTBOX!
{{todo.name}}
{{todo.date}}
[
ip{{todo.ip}}
]
{{ todo.summary }}... expand »
{{ todo.text }} « collapse
First  |  Prev  |   1   2  3  {{current_page-1}}  {{current_page}}  {{current_page+1}}  {{last_page-2}}  {{last_page-1}}  {{last_page}}   |  Next  |  Last
{{todos[0].name}}

ADVERTISEMENT
This page was tagged for
Matrix Reloaded (English) english movie
Matrix Reloaded (English) reviews
release date
Keanu Reeves, Laurence Fishburne
theatres list
Follow @fullhyderabad
Follow fullhyd.com on
About Hyderabad
The Hyderabad Community
Improve fullhyd.com
More
Our Other Local Guides
Our other sites
© Copyright 1999-2009 LRR Technologies (Hyderabad), Pvt Ltd. All rights reserved. fullhyd, fullhyderabad, Welcome To The Neighbourhood are trademarks of LRR Technologies (Hyderabad) Pvt Ltd. The textual, graphic, audio and audiovisual material in this site is protected by copyright law. You may not copy, distribute, or use this material except as necessary for your personal, non-commercial use. Any trademarks are the properties of their respective owners. More on Hyderabad, India. Jobs in Hyderabad.