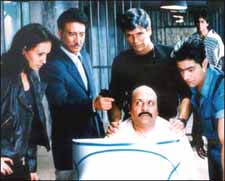 Smriti Kashyap / fullhyd.com
EDITOR RATING
1.0
Performances
Script
Music/Soundtrack
Visuals
NA
NA
NA
NA
Suggestions
Can watch again
NA
Good for kids
NA
Good for dates
NA
Wait for OTT
NA
Nothing to do with September 11th or December 13th, 'December 16' makes you wanna opt for Friday the 13th to end all your miseries. With a title like that, you'd expect some hi-fi explosions all over the place - naah, no such luck! The only decent explosion around is the BOOM that emerges from your brain going khallaaaaas!

A model movie all the way, this flick seems to be a death wish that is autographed by the likes of Milind Soman, Dipannita Sharma and cat girl Aditi Govitrikar. When the Lord decided that there should be light, I guess he should have stated in more explicit terms that it not be used to film such absolute blocks of wood.

Anyway, aiming to be MI-2, Charlie's Angels and Dilwale Dulhaniya Le Jaayenge all rolled into one, this movie starts off as a promo video for a multimedia workshop with cheesy graphics that had young maids rolling in the aisles. The suspense begins with a guy getting bumped off after he's just sent some sensitive information to the Department Of Revenue Intelligence (I didn't know the revenue department and intelligence went together). The killer sheds his disguise and chomps on a leg of chicken and we all ooh and aah in utter terror.

Enter agent Ethan Hunt, or rather Agent Vickram (Milind Soman), whose main job as a disgraced spook is to keep track of rich females and their wayward ways. He is assisted in his spooky activities by another 14-year-old (the first being the mental age of agent Vickram), Raju, who can hack like there's no tomorrow. Vickram gets summoned by 'Chief' Vir Vijay (Dannny DenZONGpa, droooool!) to get back to the force and join him to crack an important case. (Remember the first guy who kicks the bucket? Yeah, that case!).

Now, Vickram, with his cauliflower ears and blank expression, is an agent with a turbulent past - having killed his previous boss after discovering that he was a 'gaddaar'! And Vickram wants to get back with his original team consisting of Victor, Jaani and Sheba (no, not the Labrador - it's Dipannita!).

These guys gang up again and start sniffing the trails of the 4 guys whose names are connected with this mega huge money-laundering scheme. But the main bummer (apart from the extra bulky surveillance equipment and Milind's ears which block all satellite communication) is that there is a certain Mr. X who is one step ahead of these guys in the investigation and who proves to be the biggest challenge for the dimwit agents.

The movie then goes on, stating in detail all the steps that these guys must take in order to crack the case. Awwww, guys! We cracked the OU exams, we can surely figure what these chaps are upto!

The funniest and probably the saddest part is when Vickram has to go to New Zealand to patao an Indian female working in the Swiss bank. Aditi Govitrikar has a microchip on her chain, much like Bozo with the bone collar, which holds access to sensitive accounts. So Soman, in a bid to crack the case, must get his paws on that chip, and the ever resourceful Indian Intelligence figures that the only way to do it is to make the female fall in love with the guy and thus hand him the chip. I can see all the Ameerpet and Dilsukhnagar chain grabbers snicker in superiority!!! I guess this gives you a fair inkling of the corniness quotient of the flick - which is at an all time high.

The actors don't do anything much to bring down the quotient, and you have Milind Soman trying to look macho and vulnerable at the same time, which is as much fun as watching a dog nip your ankle and eat noodles all at once. The female lead Dipannita is the quintessentially 'female' agent whose main job is to serve as the honey trap who makes phone calls to summon ambulances.

The film is okay, though it does lack some good acting, some decent direction, a little bit of conviction and a whole deal of credibility. Can you watch it? Shhooorrrre! Snicker, snicker!
Share. Save. Connect.
Tweet
16 DECEMBER SNAPSHOT

ADVERTISEMENT
This page was tagged for
16 December Full Movie download 720p
Filmywap 16december
download 16 december hd movie
16 December full movie Download 1080p
16 December full Movie Download 1080p
Follow @fullhyderabad
Follow fullhyd.com on
About Hyderabad
The Hyderabad Community
Improve fullhyd.com
More
Our Other Local Guides
Our other sites
© Copyright 1999-2009 LRR Technologies (Hyderabad), Pvt Ltd. All rights reserved. fullhyd, fullhyderabad, Welcome To The Neighbourhood are trademarks of LRR Technologies (Hyderabad) Pvt Ltd. The textual, graphic, audio and audiovisual material in this site is protected by copyright law. You may not copy, distribute, or use this material except as necessary for your personal, non-commercial use. Any trademarks are the properties of their respective owners. More on Hyderabad, India. Jobs in Hyderabad.