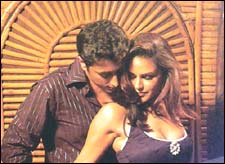 Srilakshmi Chodavarapu / fullhyd.com
EDITOR RATING
1.0
Performances
Script
Music/Soundtrack
Visuals
NA
NA
NA
NA
Suggestions
Can watch again
NA
Good for kids
NA
Good for dates
NA
Wait to rent it
NA
I wonder what exactly the point would be of reviewing Utthaan. Anyone who’s seen the trailer will anyway not see the movie, and if you missed that, you just need to be told that you only need to have watched Julie, Tum Bin and Page 3, and you’ve seen most of Utthaan: it’s basically reenactments of a few central scenes from those films loosely spliced together into a lumpy, incoherent plot.

Utthaan attempts to portray a new class of youth that believes in making a success of life by hook or by crook in ruthless pursuits of self-centered agenda – a class that is driving to further depravity the already moribund state of affairs in politics and media, by becoming proficient in this “game”. However, the chaotic series of events in the film leave you clueless as to what the director is trying to portray. Abysmally pathetic performances, a blurred plot and a disappointing soundtrack only precipitate the spiral into oblivion.

The film is about Prashant Bharati (Priyanshu Chatterjee), a media man from Mumbai, and Kiran Talreja (Neha Dhupia), a high society model, indulging in avaricious immoral acts, to make name, fame and a fast buck. The story exposes how they desert all principles for short-term payoffs. The patently silly material, however, ensures the actors don’t have much to do, and the characters themselves are misconstrued.

It’s difficult to understand why Neha Dhupia and Priyanshu Chatterjee were cast in the movie. There is not even a smidge of aptitude for portraying human emotions that might make them believable, and no spark or chemistry between them. The screenplay itself is thoroughly bogus – it’s almost like the writer is just crapping out the craziest stuff he can think of to put on paper. Forgive him Lord, for he knows not what he’s done.

Maybe it seems like I’m being particularly hard on this movie because of my own personal preferences. Maybe what I’m telling you is the downright truth. Life is simply too short, folks. Do not feed the beast.
Share. Save. Connect.
Tweet
UTTHAAN SNAPSHOT

ADVERTISEMENT
This page was tagged for
UTTHAN, FULL STORY
Uthaan movie
Uttthan movie story in hindi
Uttthan movie story
Hindi movie utthann
Follow @fullhyderabad
Follow fullhyd.com on
About Hyderabad
The Hyderabad Community
Improve fullhyd.com
More
Our Other Local Guides
Our other sites
© Copyright 1999-2009 LRR Technologies (Hyderabad), Pvt Ltd. All rights reserved. fullhyd, fullhyderabad, Welcome To The Neighbourhood are trademarks of LRR Technologies (Hyderabad) Pvt Ltd. The textual, graphic, audio and audiovisual material in this site is protected by copyright law. You may not copy, distribute, or use this material except as necessary for your personal, non-commercial use. Any trademarks are the properties of their respective owners. More on Hyderabad, India. Jobs in Hyderabad.