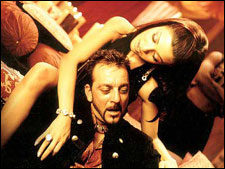 Rohit Murari / fullhyd.com
EDITOR RATING
7.5
Performances
Script
Music/Soundtrack
Visuals
NA
NA
NA
NA
Suggestions
Can watch again
NA
Good for kids
NA
Good for dates
NA
Wait for OTT
NA
The trouble with Bollywooders is that they try doing things differently. Fortunately, Musafir takes the tried and tested path of a typical masala potboiler that we have come to associate the industry with. And, it does an extraordinary job of it.

Whatever we might say, we are all suckers for the song-and-dance routine, and the larger-than-life characters that our movies portray. Musafir works on these aspects and appeals to our primitive brain.

Lucky (Anil Kapoor) is, paradoxically, down on his luck. His girlfriend, Lara (Koena Mitra), runs away with money that was not his, but not before re-enacting the ooooh-so-hot Liv Tyler car wash scene from One Night At Mc Cool's. Really, after a performance like that, Lucky did not have a reason to complain - except that the money was Billa's (Sanjay Dutt).

There are underworld dons, and then there are those like Billa. He is the biggest of 'em all. You don't take panga with him and expect to get away with it. Lucky knows that, so he takes up the one chance that Billa gives him to save himself - to deliver drugs and bring back the money.

From here on, the action shifts to Goa. In comes Sam (Sameera Reddy) to add oodles of oomph to take over from where Koena Mitra left off. And Lucky, being one of those guys who goes after anything in a skirt, falls head over heels over her. Can't blame the man. Fighting temptation for a skirt is one thing, but how do you fight off someone who refuses to wear even that over her underpants?

Anyway, Lucky makes Billa's deal. Only, he decides to get into deeper crap by losing the money again. Well, the first time he lost it, Sameera Reddy came into his life in place of Koena Mitra. May be this time around it will be Sharon Stone? Unfortunately, something else altogether happens.

Not very different from a gangster movie, is it? So what makes Musafir stand out? Well, for starters, all songs in it are item numbers - beautifully choreographed ones with foot-tapping music, actually. The dialogues are crisp, the editing slick, and the script powerful. But, most of all, it is the casting. You just cannot go wrong with a star cast like this one has.
Share. Save. Connect.
Tweet
MUSAFIR SNAPSHOT

RATING
10
Ramakrishna Anugolu on 13th Dec 2004, 7:34am | Permalink
Well, 3 stars is for the attempt - but make no mistake, this is a noisy and violent movie, catering only to our baser instincts. Performances and dialogues are great, along with high-quality technical wizardy and front-bench hugging lines from Sanju, but this movie is an unabashed remake of Oliver Stone's U Turn with item numbers thrown in. But Anil Kapoor is no Sean Penn, though Sameera is preferable to Jennifer Lopez, and Mahesh Manjrekar is oh-so-slimy, one of the most despicable hindi-movie villians.
RATING
6
Musafir Hyderabadi on 13th Dec 2004, 4:03am | Permalink
Lawsuits lawsuits. LAWSUITS!

ADVERTISEMENT
This page was tagged for
musafir full movie in hindi
Musafir hindi movie
Musafir reviews
release date
Sanjay Dutt, Anil Kapoor
Follow @fullhyderabad
Follow fullhyd.com on
About Hyderabad
The Hyderabad Community
Improve fullhyd.com
More
Our Other Local Guides
Our other sites
© Copyright 1999-2009 LRR Technologies (Hyderabad), Pvt Ltd. All rights reserved. fullhyd, fullhyderabad, Welcome To The Neighbourhood are trademarks of LRR Technologies (Hyderabad) Pvt Ltd. The textual, graphic, audio and audiovisual material in this site is protected by copyright law. You may not copy, distribute, or use this material except as necessary for your personal, non-commercial use. Any trademarks are the properties of their respective owners. More on Hyderabad, India. Jobs in Hyderabad.