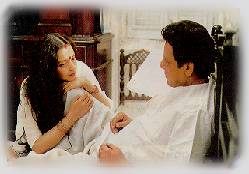 Feroz Hassan / fullhyd.com
EDITOR RATING
7.5
Performances
Script
Music/Soundtrack
Visuals
NA
NA
NA
NA
Suggestions
Can watch again
NA
Good for kids
NA
Good for dates
NA
Wait for OTT
NA
Domestic issues and all related topics have been at the center of many an 'art' film, and may be a clear put-off for a majority of the audience. Be that as it may, it is one of the striking features of such films that they spend time on elaborating upon the little things that we do, to give a true-to-life depiction of life. It could be the small talk, or the mundane details that illustrate the psyche of the characters, even as they deal with larger issues. But it is often the bane of these films that the directors try to straddle the parameters governing two completely different approaches, churning out rather muddled projects.

Basu Bhattacharya is no more than a trifle guilty of this in Aastha, which, if resolved, could have had us out of the theaters a neat twenty minutes before we actually did, and dwelling upon the better aspects of the film. But dwell upon them we still will. To begin with, Bhattacharya's script exposes the rickety nature of middle-class morality, susceptible to calls of the consumerist economy while also pointing to the existence of forces within the same individuals that may still redeem it.

Mansi is the typical middle-class housewife, constantly having to juggle chores and make difficult choices, with an eye firmly fixed on things out of her reach. Amar, her husband, is the philosophic lecturer, who serves to temper Mansi's desires with reason. But she finds it difficult to counter the facile reasoning of Reena, who believes that dreams are to be attained, and that the ends justify the means.

She takes Mansi on a trip of debauchery, luring her with big money. Guilt inevitably follows in Mansi, but the easy money is a touch difficult to resist. This continues till confession comes along right at the end. How does Amar take it? It isn't much of a surprise if the way that his character unfolds is any indication.

There are numerous discussions on morals and morality between Amar and his students, with points of reference drawn from rural India as well as from the West - their films, their scandals et al. These could have easily turned out to be childish, but Bhattacharya does a tremendous job of investing Amar with exceptional reasoning capacity that simply doesn't reinforce the black-and-white distinctions that already exist.

Needless to say, Rekha and Om Puri are completely at ease with their roles, bringing all their restraint and experience to the portrayals. However, the irritants come in the form of the lovemaking scenes that show the actors in endless agony without even kissing, always to some ridiculous music. Well, these need not have been attempted, if there were insurmountable constraints in filming these, and the film wouldn't have been any poorer. This dilutes the otherwise mature approach.
Share. Save. Connect.
Tweet
AASTHA SNAPSHOT

ADVERTISEMENT
This page was tagged for
Aastha
AASTHA
movies like astha
film Aastha
handi film ashta
Follow @fullhyderabad
Follow fullhyd.com on
About Hyderabad
The Hyderabad Community
Improve fullhyd.com
More
Our Other Local Guides
Our other sites
© Copyright 1999-2009 LRR Technologies (Hyderabad), Pvt Ltd. All rights reserved. fullhyd, fullhyderabad, Welcome To The Neighbourhood are trademarks of LRR Technologies (Hyderabad) Pvt Ltd. The textual, graphic, audio and audiovisual material in this site is protected by copyright law. You may not copy, distribute, or use this material except as necessary for your personal, non-commercial use. Any trademarks are the properties of their respective owners. More on Hyderabad, India. Jobs in Hyderabad.