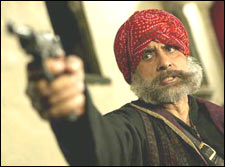 Samrat Sharma / fullhyd.com
EDITOR RATING
7.5
Performances
Script
Music/Soundtrack
Visuals
NA
NA
NA
NA
Suggestions
Can watch again
NA
Good for kids
NA
Good for dates
NA
Wait to rent it
NA
The first collaboration between a rebellious auteur and gifted filmmaker, and arguably India's biggest actor, is a great return to form for both. Amitabh Bachchan has always been a director's actor: give him a bad director, and he will turn in a mediocre performance that gets the job done. Give him a director who is over the top and needlessly opulent, and he will turn in a caricature of a performance. Evidently, give him Vidhu Vinod Chopra, and he serves up one of his most memorable performance in years.

Oh, and Vidhu Vinod Chopra? He is the man who has been obsessed with characters. Not just happy with populating a great script with fully developed characters and still making sure they work within the movie masala mold, he wants to create characters that will live in mass memory for a long long time. He wants to create characters that transcend your memory of the film. With Eklavya, as with Munnabhai, he has created a character that is iconic, tragic, and ultimately symbolic of the film in himself.

As the titular royal bodyguard, an aging human relic who has served and sworn to protect the royal family of Devigarh and its fort as a nine-generation old tradition, Amitabh serves as the perfect embodiment of the survival of the collapsing splendor and dignity of the past in today's times. Apart from his look, which is fantastic by the way, his expressive bloodshot eyes convey a myriad spectrum of emotions, and thus is born on celluloid a character with iconic and epic stature. I had forgotten what it was like to watch a true big screen Amitabh film, and this one takes me back to all those memorable characters that he played. For that, I thank you, Mr. Chopra.

This is a film with a very short running time: less than 2 hours, really. Add to that the fact that there is only one song in the entire running time, and you begin to think that Chopra is trying to break the Bollywood mold once again. Yet, if you dig beneath the surface, this is big budget Bollywood mainstream film, simply because it has a dramatic and Shakespearean plot that only a Bollywood film can deliver.

Rana Jayawardhan (Boman Irani) is the King of Devigarh in a democratic India, stripped of all but ceremonial power. To add to his feelings of frustration and inadequacy, his wife Rani Suhasini Devi (Sharmila Tagore) refuses to take his name on her deathbed, instead calling out to the royal guard. When their son, Harshwardhan (Saif Ali Khan), comes back to the country for her funeral, his mentally challenged sister, Nandini (Raima Sen), and his childhood sweetheart, Rajjo (Vidya Balan), are overjoyed.

All that is short-lived as it is revealed that Rana's brother Jyotiwardhan (Jackie Shroff) and his son Udaywardhan (Jimmy Shergill) are plotting to overthrow the current monarch and take the kingdom over, with Harsh only complicating their plans. When a murder threat to the king is made, DSP Pannalal Chohaar (Sanjay Dutt), a low caste man who has risen up the ranks, comes calling in a palace already thick with the smell of intrigue. The plot is not too spoiler-y, but I will refrain here to ensure your maximum surprise at the requisite twists in the tale.

Chopra has managed to play the game with a plot that opens its cards to you two minutes in the film, but maintains a level of cloak-and-dagger efficacy about it till the end. He has managed to revitalize the expressive conventions of Bollywood mainstream drama, and the action bits appear only when, and as, necessary. This is full-bodied storytelling, with blood and bravado and thunder and lightning.

This is further multiplied by the fine acting ensemble that has been brought together. Saif, with his sombre and understated performance, delivers a brooding and contemplative sensibility that holds the film together. This is an out-and-out Amitabh film, but Sanjay Dutt as the large-hearted yet tough-as-nails cop steals the movie from him. Again, it’s Chopra's obsession with memorable characters – Pannalal Chohaar is something of a bravura performance, and you will take it with you long after the film is over.

Boman has become the master of subtle visual acting, and he manages to put in a performance that he can truly chew over. Jimmy Shergill relishes the chance to play an evil good-looking aristocrat, and he polishes his performance with brimming malice. The rest of the cast is something of a misfire – great acting, sure, but after all that Chopra invests in introducing a character, he swiftly does away with Raima, Vidya and Jackie – all pivotal roles getting the raw end once the film starts hurtling towards its climax.

That and a laggard initial second half mar the otherwise technically sound and thematically superior film. Chopra and his cinematographer, Nataraja Subramanian, create images that startle, suck you in the world of the dying monarchy, and mount a grandiose tale in suitably awe-inspiring frames. The editing is razor sharp, and despite the low murmurs, I think I like the sync sound better.

Chopra needs to pontificate a lot on the concept of Dharma, and the film's central thematic conceit ties in well with the on-the-surface expansiveness of the whole narrative. It does get to a point where there is more Dharma talk and less Karma, though exactly at those moments the film throws another twist and sucks you right back.

This is gutsy, nostalgic filmmaking, and Chopra is braving a lot of odds with this film, clearly. It is a powerful drama with a strong subtext and underlying sense of Bollywood storytelling. It is treated tremendously well by the technical team, and the director has done almost everything right in his quest to tell this story.

Despite the little niggling flaws, it cannot be denied that Chopra has pulled off an immensely successful gambit, and in finally managing to work with Bachchan, has given us a character worth remembering. Bachchan, in his part, delivers a crackerjack lead performance in a film brimming with great acting. Both of these men have given us a true big screen Bollywood film early on this year, and that must be applauded.
Share. Save. Connect.
Tweet
EKLAVYA SNAPSHOT

See Eklavya full details
EKLAVYA USER REVIEWS
1 - 9 OF 9 COMMENTS
POSITIVE  |  NEGATIVE |  NEWEST  |  OLDEST  |  MOST HELPFUL  |  LEAST HELPFUL
USER RATING
6.2
61 USERS
Performances
Script
Music/Soundtrack
Visuals
NA
NA
NA
NA
Can watch again - NA
Good for kids - NA
Good for dates - NA
Wait to rent it - NA
Rahul on 12th Mar 2007, 2:53am | Permalink
Maybe I saw a different version of the movie - the one i saw picked ONLY one aspect from the ENTIRE Mahabharatha and picked only ONE tale that couldve been solved in 45 mins of the movie! WHY did VVC spent 95 mins to tell me the tale? The story starts off with so much potential, and it ends too with so much potential thus never delivering the complete product. This one ranks with VVC's worst - along with Kareeb (ah yes, we do remember that movie, dont we!?).
RATING
2
Drona Aacharya on 28th Feb 2007, 7:40pm | Permalink
A lousy tale....and excellent cinematography!! Its something like when the bad meets the good.......
and its bad till the end.
RATING
2
Sai Thoom on 25th Feb 2007, 12:54pm | Permalink
Ofcourse its a good movie. But Mr.Samrat Sharma forgets that a critical review is small,crisp and objective. In modern litrature going ga-ga about the film in a review is called unprofessinal. Full hyderabad needs mature and professinal writers.
RATING
6
Occasional Critic on 24th Feb 2007, 6:16pm | Permalink
Atleast Vishal Bharadwaj has the guts to say that his Omakara was inspired by Othello. Mr. Chopra, Can you say "Hamlet".
RATING
2
Ravi Varma on 20th Feb 2007, 5:50pm | Permalink
ya sure cinematography is really cool. but thats the #$%% is with the plot. this eklavya dont slice his thumb off. he forgets his duties and lives happily for the rest of his life with his thumb. thats not hero material.
RATING
2
Babu on 20th Feb 2007, 12:17am | Permalink
fantasic movie yaar
RATING
10
Wired Beats on 17th Feb 2007, 9:17pm | Permalink
One motherload of crap..very boring plot with amazing cinematography..
RATING
4
Khan Khans on 17th Feb 2007, 7:15pm | Permalink
I agree with Abbhay, this movie sucks
RATING
2
Abhay on 17th Feb 2007, 10:42am | Permalink
pathetic...so many ppl wasted in inconsequential roles...drags to the hilt !
RATING
4
LEAVE A COMMENT
fullhyd.com has 700,000+ monthly visits. Tell Hyderabad what you feel about Eklavya!
MORE MOVIES
Latest Reviews
83
83 - Telugu
Shyam Singha Roy
The Matrix Resurrections - H...
The Matrix Resurrections
more
Pushpa: The Rise - Hindi
Pushpa: The Rise
Spider-Man: No Way Home
Spider-Man: No Way Home - Hi...
Spider-Man: No Way Home - Te...
Chandigarh Kare Aashiqui
Akhanda
Satyameva Jayate 2
Ghostbusters: Afterlife
Eternals (Telugu)
Contemporary Reviews
Maya Bazar
Gudumba Shankar
Undertrial
Jung
Gopi
more
Pirates Of The Caribbean - A...
Khadgam
Blackmail
Aastha
Aaru
Rickshawvodu
Maine Pyaar Kyun Kiya
Kyaa Kool Hai Hum
Utthaan
Random Reviews
Hard Target
Manasunte Chaalu
Sins Of The Night
Princess Diaries 2
Nuvvu Nenu
more
Rock On!!
A Christmas Carol
Tangled
Tinker Tailor Soldier Spy
Okkadine
Biscuit
Dumb And Dumber To
Deadpool (2016)
A Gentleman
Captain Marvel (Telugu)
SEARCH MOVIES
Dissatisfied with the results? Report a problem or error, or add a listing.
ADVERTISEMENT
SHOUTBOX!
{{todo.name}}
{{todo.date}}
[
ip{{todo.ip}}
]
{{ todo.summary }}... expand »
{{ todo.text }} « collapse
First  |  Prev  |   1   2  3  {{current_page-1}}  {{current_page}}  {{current_page+1}}  {{last_page-2}}  {{last_page-1}}  {{last_page}}   |  Next  |  Last
{{todos[0].name}}

ADVERTISEMENT
This page was tagged for
eklavya full movie moviemaad
eklavya full movie
Bolywood Eklavya full movie
eklavya movie story in hindi
eklavya movie review
Follow @fullhyderabad
Follow fullhyd.com on
About Hyderabad
The Hyderabad Community
Improve fullhyd.com
More
Our Other Local Guides
Our other sites
© Copyright 1999-2009 LRR Technologies (Hyderabad), Pvt Ltd. All rights reserved. fullhyd, fullhyderabad, Welcome To The Neighbourhood are trademarks of LRR Technologies (Hyderabad) Pvt Ltd. The textual, graphic, audio and audiovisual material in this site is protected by copyright law. You may not copy, distribute, or use this material except as necessary for your personal, non-commercial use. Any trademarks are the properties of their respective owners. More on Hyderabad, India. Jobs in Hyderabad.