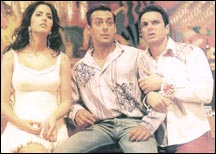 Priyanka Pulla / fullhyd.com
EDITOR RATING
5.0
Performances
Script
Music/Soundtrack
Visuals
NA
NA
NA
NA
Suggestions
Can watch again
NA
Good for kids
NA
Good for dates
NA
Wait for OTT
NA
MPKK is a movie with a 20-foot-long anaconda star cast. At the head of the anaconda is the hulky Salman Khan in block letters. Then comes Katrina Kaif. Then Sushmita Sen, then Arshad Warsi, then Sohail Khan so on till the tiny wiggling tail of the anaconda is an unfortunately underutilized Isha Koppikar in an unreadable Marlette font, size 4.4; a flittering little role. These, not counting 'guest appearances' by Arbaaz Khan, Vivek Vaswani, Rajpal Yadav etc.

There are not too many ways to rate a movie at the extreme end of a scale, and to get flowery with such a task is to insult one's own intelligence. The scale becomes binary - black or white, good or bad - and on it, MPKK is an unqualified 'BAD'.

The movie starts off pretty well, with the kind of slapstick and burlesque humor that makes you laugh reluctantly and guiltily. Poor jokes that make you laugh by their sheer audacity. In fact, people around me were laughing to the very end. You can't help it, but it's an aching, fighting-against-your-own-intelligence laughter. "Don't want to be here, don't want to spend 60 bucks on THIS, stop it stop it," kind of laughter.

The story really is inconsequential, but a reviewer must do the due diligence. Sameer (Salman Khan) is an orthopaedician who routinely tells women who are falling for him, that he is married. So that he can avoid them. Then he falls for Sonia (Katrina Kaif}. Unfortunately he has already told her he is married, and so he has to cook up a tale to divorce his fictitious wife so he can marry Sonia. So he ropes in Naina (Sushmita Sen) to play his wife, and the other characters serve to provide further complications to the story.

The movie is unfortunate for a lot of reasons. Gorgeous-looking actors, fancy budgets (apparent from the locales) and beautiful clothes, all wasted terribly on what comes across as a third grade school play scripted hurriedly by the class back-benchers. Push him over, slap him, use an obscenity, tell lies and cheat, drop underpants by mistake and laugh! Makes you wonder what the actors think while playing such dimwitted parts - how can they take their jobs so seriously?

Not to get more anguished about 'just a movie', but God! What a waste of GOOD GOOD MONEY!

Anyway, more detail for you. Katrina Kaif, with her benign yet delectable Virgin Mary looks, is eye candy, and charms and charms. Despite the bad script, her camera-friendliness and sweet looks make you not want to blame her.

Sushmita Sen is totally wasted, and suffers from harsh lighting in at least one song sequence, where her perennially drunken and swollen-eyed look and her creased leathery skin is displayed to her unfortunate disadvantage. It's time she moved beyond the slinky look and item song parts, or opted for dimmer lighting, airbrushing and less-revealing sari blouses. (Since she seems to favor them so after the spectacular success of her Main Hoon Na look). She tries to inject character into her ramrod straightforward role, but despite her commendable efforts, fails.

Salman Khan is good! Innocent-looking (with his grafted hair) and funny for a change.

No Abu Salem and Dawood Ibrahim connection here, and the movie turnout was pretty good despite yesterday's SMS warnings by the public on TV about how they would boycott Khan.

Halfway through the movie, I had lost my will to watch further. Somehow the jokes and noises swam past me, and I let it dissolve into hazy color spots and laughter by my fellow audience. However, a pre-interval scene in the movie really woke me up.

In the mock divorce proceedings for the fictitiously married Khan and Sen, Arshad Warsi, who play-acts the lawyer, likens their failing marriage to a 'Sadi hui Hindi ki picture jo teen ghanton ke bad bhi chalti jaaye, chalti jaaye'. That jolted me out my senses. Sounded like a morbid mistake by the dialogue-writer inadvertently dooming his own movie by describing it so damnably well, right to the audience. I laughed for a few seconds and then quickly memorized the line and kept repeating it to myself for the rest of the movie, pleased to have found my inspiration for writing this.
Share. Save. Connect.
Tweet
MAINE PYAAR KYUN KIYA SNAPSHOT

See Maine Pyaar Kyun Kiya full details
MAINE PYAAR KYUN KIYA USER REVIEWS
1 - 3 OF 3 COMMENTS
POSITIVE  |  NEGATIVE |  NEWEST  |  OLDEST  |  MOST HELPFUL  |  LEAST HELPFUL
USER RATING
7.5
52 USERS
Performances
Script
Music/Soundtrack
Visuals
NA
NA
NA
NA
Can watch again - NA
Good for kids - NA
Good for dates - NA
Wait for OTT - NA
ASHOO on 14th Sep 2005, 9:06pm | Permalink
C'MON PRIYANKA THIS IS NOT A BHANSALI OR JOHAR THIS IS DAVID N FILMS NEED TO BE WATCHED WITH A VIEW FILM WAS EXCELLENT N EQUALLY WAS EVERY CHARACTER N SUSH WAS AT HER BEST N LOOKED GORGEOUS THERE IS ONE THING I AGREE TO THAT IS THAT CAMERA MAN WAS NOT EFFICIENT APART FROM WHICH THE FILM IS MEANT TO BE A HIT
RATING
10
Mick Dolly on 21st Jul 2005, 10:16pm | Permalink
Its a fun movie...Typical David Dhawan Comedy...Wonderful music and good dance....Everyone acted all...especially Salman; looking terrific with equivalently posh looking Katrina....Sohail khan acted well too...One can watch this movie as a total entertainment....PLEASE DONT COMPARE WITH OTHER MORE STORY ORIENTED or SUBJECT MOVIES...and remember the movie means not to make sense...

Only negative: End could have been better...

RATING
8
Appu on 18th Jul 2005, 12:54pm | Permalink
One * for the reviewer, looks like the reviewer went to see 'Sarkar' and saw MPKK instead.... learn to review movies in the spirit they are made, this is a david dhawan movie, not shyam benegal's movie.

David dhawan never claims that his movies stimulate people mentally...his movies are just pure fun,and you need to leave your brain behind.

Also, the reviewer seems to have an inferiority complex when it comes to Sush...well, such is gorgeous, and no amount of your criticism can change that.

Maybe you can read up the rediff review as a crash course...

ADVERTISEMENT
This page was tagged for
Maine Pyaar Kyun Kiya hindi movie
Maine Pyaar Kyun Kiya reviews
release date
Salman Khan, Katrina Kaif
theatres list
Follow @fullhyderabad
Follow fullhyd.com on
About Hyderabad
The Hyderabad Community
Improve fullhyd.com
More
Our Other Local Guides
Our other sites
© Copyright 1999-2009 LRR Technologies (Hyderabad), Pvt Ltd. All rights reserved. fullhyd, fullhyderabad, Welcome To The Neighbourhood are trademarks of LRR Technologies (Hyderabad) Pvt Ltd. The textual, graphic, audio and audiovisual material in this site is protected by copyright law. You may not copy, distribute, or use this material except as necessary for your personal, non-commercial use. Any trademarks are the properties of their respective owners. More on Hyderabad, India. Jobs in Hyderabad.