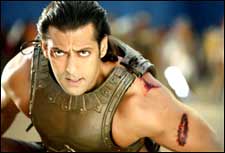 Deepa Garimella / fullhyd.com
EDITOR RATING
4.0
Performances
Script
Music/Soundtrack
Visuals
7.0
3.0
6.0
7.5
Suggestions
Can watch again
No
Good for kids
No
Good for dates
No
Wait for OTT
Yes
Even assuming that people in this part of the country hadn't watched a certain trade coup not too long ago, and maybe one or two other first movers imported from lands spilling over with more talent, money and star power, Veer is a sorry flick.

It's not even about the predictability of the plot anymore (in how many ways can the story of a brave warrior in love with a royal princess, and bent on defeating the stronger, traitorous enemy progress?) - the lack of thought in the entire production is so pointedly visible and so embarrassing (to the audience, that is), it's like watching someone coming to an interview in briefs and hawaii chappals.

The story of Veer is based on a fearless tribal clan called the Pindharis, which is at daggers with the Raja (Jackie Shroff) of Madhavgarh, because he had betrayed them. The Pindhari head Prithviraj (Mithun Chakraborty) has a son Veer (Salman Khan), who goes on to fall in love with a princess Yashodhara (Zarine Khan) he sees in a fleeting glance during a routine plundering raid.

Veer and his brother (Sohail Khan) inexplicably go to London, supposedly as part of Lord Macaulay's revolutionary educational reforms, that involves students of a few other colonies being picked to study in the British capital. Veer knows that the princess is around in London as well - a lot of Indian royalty apparently, is - and after he woos her, it turns out that she's the daughter of the Madhavgarh Raja. The rest of the story is about how the Pindharis get their due.

Nothing of substance really happens in the flick. And when you blend emptiness with cheesiness, you end up with quite a few tomatoes and rotten eggs at the box office.

Veer has mind-boggling levels of uni-dimensionality in its script. And frustratingly generic characters to go with it. "British" officers mouth lines about how filthy India is, evil Indian royals side with the villainous colonizers, Veer isn't as impressed with London's buildings as he is by the Taj Mahal, and badly dressed natives with tall beer mugs have Gaul-like celebratory parties. And asking for nuances in the lead characters is like asking for oregano at a chat stand.

Then, the violence - evidently meant to be passion-rousing and whistle-evoking, just like some of the jingoistic dialogues. It just ends up looking tacky, at best - consider Veer twisting necks with his bare hands.

Sure, Salman Khan is a star and gets to go topless with a vengeance, but what he deserves is a much better director. He acts as he's supposed to act, and doesn't really let down fans. Zarine Khan looks quite as Katrina-esque as she's promoted as, and marginally brightens the scenery.

Sohail Khan infuses his exasperating brand of tomfoolery into the flick, but doesn't make much of an impact. Mithun and Jackie Shroff are good but end up like wallpaper, just like every single person in the cast. And it's really the fault of nobody save the team calling the shots of the movie.

The production values might be lavish, but there's none of the authenticity of a single successful period flick you've watched until now - not in the Indian locales nor in the British settings. Even talking of Lagaan or Jodhaa Akbar at a time like this is impolite, so we'll just say that Hagar The Horrible costumes and arbitrary English gowns and hairstyles aren't cutting any ice with audiences who weren't born yesterday. The war scenes aren't much to speak of, either.

Surili Akhiyon Waali quite saves the soundtrack - it's a lilting number that's played throughout the film. The rest of the songs are a little less forgettable than the movie, but not chartbusters.

In all, Veer is a non-serious attempt at entertainment that merits but a click of the remote when aired on television.
Share. Save. Connect.
Tweet
VEER SNAPSHOT

ADVERTISEMENT
This page was tagged for
Veer hindi movie
Veer reviews
release date
Salman Khan, Zarine Khan
theatres list
Follow @fullhyderabad
Follow fullhyd.com on
About Hyderabad
The Hyderabad Community
Improve fullhyd.com
More
Our Other Local Guides
Our other sites
© Copyright 1999-2009 LRR Technologies (Hyderabad), Pvt Ltd. All rights reserved. fullhyd, fullhyderabad, Welcome To The Neighbourhood are trademarks of LRR Technologies (Hyderabad) Pvt Ltd. The textual, graphic, audio and audiovisual material in this site is protected by copyright law. You may not copy, distribute, or use this material except as necessary for your personal, non-commercial use. Any trademarks are the properties of their respective owners. More on Hyderabad, India. Jobs in Hyderabad.