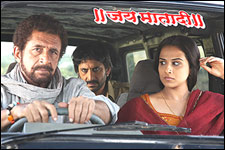 So crypticness and profanity apparently make for good bedfellows, but we doubt if there are a lot of people out there who're willing to jump in the sack along with them. Don't get us wrong - there are indeed viewers who get turned on by entire conversations carried in cuss word lingo, and who, along with the makers, assume that if something is the anti-thesis of commercially-proven material it must be new-age cinema. The box office, however, speaks for itself.

The movie features a pair of robbers Khalujan (Naseeruddin Shah) and Babban (Arshad Warsi), who are on the run from their big man Mushtaq (Salman Shahid). The former two are best buddies, and take refuge in the home of Krishna (Vidya Balan), the widow of a gangster. A baffling love triangle of sorts emerges, even as Krishna has a motive of her own that she strives to realize.

Set in a simmering backdrop of wealth inequality and the People's War in the northern bad-lands, the movie has all the attention to detail it can get. The measured pacing, the quiet and smart-ass humour (excluding the parts where the audiences end up LOL-ing, of course - the swear words) and the plot twists towards the end are where the film smacks of brilliance in execution.

Oh of course, the kiss. Sure, it's long and elaborate, with attention paid to detail, and carefully executed. Those who came for the review of the film may please move on.

Ishqiya is a film that will be hailed among movie critic circles. And really, it probably deserves to be, as well.

The story, however, is incomprehensible for a large part of the proceedings. And when they complicate Krishna's character by making her clearly respond to one man's advances and then go on to respond to the other as well, you know this is going to be one hell of a mind game. Also, the dialogues, are spoken in the UP lingo, and might make the movie need the pause button pressed pretty frequently before movin ahead.

Performances are undisputably neat. Naseeruddin Shah, wrinkles and all, is quite the pinnacle of good acting even in scenes where he doesn't say much, and is a treat to watch all by himself. Arshad Warsi as the brash and lustful Babban is good as well. Vidya Balan is all beauty, grace and seductiveness though she doesn't seem rustic enough - we think the gaping wide cholis make her seem more like an M F Hussain muse than the widow of an armed mobster.

Vishal Bharadwaj lends his usual Sufi and classical touch to the soundtrack, which has already become quite popular. The visuals have a Vishal Bharadwaj stamp about them as well.

Ishqiya is upto you, really. Watching it isn't as much of a mistake as believing that this is the last word in entertainment.
Share. Save. Connect.
Tweet
ISHQIYA SNAPSHOT

ADVERTISEMENT
This page was tagged for
Ishqiya hindi movie
Ishqiya reviews
release date
Naseeruddin Shah, Arshad Warsi
theatres list
Follow @fullhyderabad
Follow fullhyd.com on
About Hyderabad
The Hyderabad Community
Improve fullhyd.com
More
Our Other Local Guides
Our other sites
© Copyright 1999-2009 LRR Technologies (Hyderabad), Pvt Ltd. All rights reserved. fullhyd, fullhyderabad, Welcome To The Neighbourhood are trademarks of LRR Technologies (Hyderabad) Pvt Ltd. The textual, graphic, audio and audiovisual material in this site is protected by copyright law. You may not copy, distribute, or use this material except as necessary for your personal, non-commercial use. Any trademarks are the properties of their respective owners. More on Hyderabad, India. Jobs in Hyderabad.