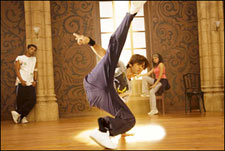 Deepa Garimella / fullhyd.com
EDITOR RATING
4.0
Performances
Script
Music/Soundtrack
Visuals
8.0
3.0
6.5
7.0
Suggestions
Can watch again
No
Good for kids
Yes
Good for dates
Yes
Wait for OTT
Yes
Chance Pe Dance is an unabashedly pubescent film cashing in entirely on the charisma of 2 stars who we bet would look teenage-ish right until their last breath. As far as catering to audiences who - to their misfortune, we're sure - couldn't care less about Shahid and Genelia playing cute-cuter-cutest for 2 hours, the movie draws a blank.

The vacuity of Chance Pe Dance probably arises from the fact that it's a movie whose climax is based on someone winning a reality show. Layering on the emptiness further is the fact that it speaks of a young man's rise from auditions to Bollywood red carpet in no time.

There's no plot, and this isn't a figurative statement. Sameer (Shahid Kapur and the bulging biceps) is a talented, never-say-die aspiring bloke who's been waiting for a break for three years now. He faces bad times - he's thrown out by his landlord, producers make offers and ditch him, and his best friend unceremoniously deserts him. Meanwhile sunshine takes on the form of choreographer Tina (Genelia) who stands by his side in his misfortune, and a bunch of school kids that he teaches dance to.

Ken Ghosh makes the film crawl throughout, before getting to the final frame of Sameer walking the red carpet. And even though the scenes have modern-day Bollywood spontaneity and class, because of the film's slow pace, the story ends up looking all the more microscopic.

Then, for a rather high-schoolish concept, the kids are a misfit, and hardly bring in any cuteness either. And neither do they have any well-defined role to play in the hero's success. Like the heroine, they're just around.

And the courtship consists of a couple of coy two-bit conversations, Tina backing out of her assignment because Sameer wasn't given a chance to act in it, and one coy conversation later, Sameer calling up Tina to say he loves her. It's pretty criminal to waste the humongous charm and on-screen chemistry of the couple this way.

Shahid plays to the crowd that comes to watch. He - and surely, the writer as well - knows exactly what will bring forth the giggles among the crowds. He knows exactly what, among these crowds, will evoke the longing for male company that will fit mental and physical measurements of those of Shahid or whatever role he dons. Needless to say, the actor has fun doing pretty much nothing.

Genelia joins the club. She's not really furniture in the movie, but isn't really the plumbing system either. She does light up scenes, though.

Mohnish Behl, who plays a rather ridiculously written role of a filmmaker, looks as dishy as ever. Satish Shah needn't even act - his mere presence brought out the chuckles. Parikshit Sahni lends immense depth to his miniscule role.

The music seems to have been designed for aerobics classes and miscellaneous dance contests. Adnan Sami, the music director of this one, has delivered a couple of lilting romantic songs, but the dance numbers are loud and generic.

The camera work is impressive, and brings out the best of whatever's on screen, lending a youthful and vibrant look to the production.

Chance Pe Dance doesn't seem too insistent on being watched, and can be safely skipped.
Share. Save. Connect.
Tweet
CHANCE PE DANCE SNAPSHOT

ADVERTISEMENT
This page was tagged for
Chance Pe Dance hindi movie
Chance Pe Dance reviews
release date
Shahid Kapur, Genelia
theatres list
Follow @fullhyderabad
Follow fullhyd.com on
About Hyderabad
The Hyderabad Community
Improve fullhyd.com
More
Our Other Local Guides
Our other sites
© Copyright 1999-2009 LRR Technologies (Hyderabad), Pvt Ltd. All rights reserved. fullhyd, fullhyderabad, Welcome To The Neighbourhood are trademarks of LRR Technologies (Hyderabad) Pvt Ltd. The textual, graphic, audio and audiovisual material in this site is protected by copyright law. You may not copy, distribute, or use this material except as necessary for your personal, non-commercial use. Any trademarks are the properties of their respective owners. More on Hyderabad, India. Jobs in Hyderabad.