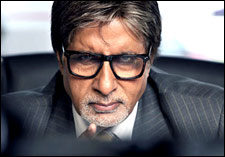 Ram Gopal Varma first promoted Rann several months ago, in a full-page ad on the front - nay, zeroth - page of a news daily. And recently, among his other gimmicks, was a bulletin by Amitabh Bachchan on the news channel run by the same group.

And in Rann, he wonders why, instead of news being an end and money being just the means to it, it's turning out to be the other way round nowadays. Of course, he's probably not really wondering, unless he's terribly naÃ¯ve.

Rann opens with characters having well-defined attributes and intentions. Vijay Harshavardhan Malik (Amitabh Bachchan), owner of India 24X7, is the biggest media baron in the country. He's fiercely idealistic, and believes that news-reporting is social service.

Purab (Riteish Deshmukh) is a rookie inspired by the man. A new employee of the channel, his forthright moralizing riles Jai (Sudeep), Vijay's foreign-returned son who partly controls the proceedings. Jai's values are initially in place, but are pushed back when desperation hits - after all, his rival channel, headed by Amrish Kakkar (Mohnish Behl), is stealing India 24X7's ideas.

Jai is made to fabricate an ugly conspiracy netting the PM himself, and offered money by the opposition leader Mohan Pandey (Paresh Rawal) for it, without Vijay's knowledge. Naturally, the whole thing blows up in quite a few faces very soon. The mess is too sticky for anyone to handle - leave alone filmmakers - but Varma has Amitabh Bachchan deliver a teary-eyed speech in the end and make up for it.

The overly-populated universe of news channels that mindlessly sensationalize drivel in their quest to stay live 24 by 7 is something that lends itself to satire and contempt. Still, Rann is not a social commentary as much as it is a fairy tale on ethics.

Contrary to popular rose-tinted thinking, roughly 99% of mankind is here to earn a living - which, incidentally, is what makes the world go round. That includes telecom companies, media houses, software companies, educational institutions, hospitals, ayahs, cooks, sweepers, and everyone else.

And in the context of organizational growth, pitting business gains against ethics makes for only half the picture. The other half involves a high degree of creativity in management - there indeed are examples of successful people who've made money staying honest.

The analysis obviously escapes Rann's notice, while the movie plays around with starkly black-and-white characters. In Rann, there's Gandhian thinking and there's vile politician thinking, and it is supposedly incredibly easy for a businessman to switch over from the first to the second, with absolutely no options left in between.

Still, it invites cheers. Because cocking a snook at manipulative media is quite the duty of every responsible citizen, and is fun. Even as Rann weaves a serious plot around the usual suspects, showing brooding disdain for greed for TRPs overtaking social responsibility, Varma uses Rajpal Yadav to do the more wicked sneering. In a comic-serious track, Yadav plays a clowning journalist with a penchant for sansanikhez masala-ized news bulletins. There are also several obvious references to real life, that could draw a few sniggers.

Mohnish Behl has a meaty role, though not very layered, and he is visibly charged. Both Riteish Deshmukh and Sudeep are naturals, and Rajpal Yadav is fun. Bachchan, who's made to maintain a subdued presence all through, still ends up towering in the end over the film, and over the whole theme even. The women have nothing much to do.

The scenes have been stunningly shot, in a grey-bluish hue, with plenty of close-ups. And the powerful soundtrack does well for the film's pacing.

See Rann full details
RANN USER REVIEWS
1 - 1 OF 1 COMMENTS
POSITIVE  |  NEGATIVE |  NEWEST  |  OLDEST  |  MOST HELPFUL  |  LEAST HELPFUL
USER RATING
3.0
1 USER
Performances
Script
Music/Soundtrack
Visuals
4.0
2.0
6.0
6.0
Can watch again - No
Good for kids - No
Good for dates - No
Wait for OTT - No
usual_suspect on 1st Feb 2010, 2:42pm | Permalink
Deepa disappointed me with this review.
she usually gets it spot on but am afraid not in this case.
rann is too cliched and just dont waste ur money watching this not even on a rented dvd.
its just a publicity gimmick-cashing in on the "sensationalism an breaking news"levels india media in general has stooped to"..wish they remade a tomorrow never dies instead or inspired by irvng wallace's "the almighty"they too deal wid media but the concept is novel and thrilling..this is just boring gyan sessions and nuthing else

ADVERTISEMENT
This page was tagged for
rann movie summary
Rann hindi movie
Rann reviews
release date
Amitabh Bachchan, Riteish Deshmukh
Follow @fullhyderabad
Follow fullhyd.com on
About Hyderabad
The Hyderabad Community
Improve fullhyd.com
More
Our Other Local Guides
Our other sites
© Copyright 1999-2009 LRR Technologies (Hyderabad), Pvt Ltd. All rights reserved. fullhyd, fullhyderabad, Welcome To The Neighbourhood are trademarks of LRR Technologies (Hyderabad) Pvt Ltd. The textual, graphic, audio and audiovisual material in this site is protected by copyright law. You may not copy, distribute, or use this material except as necessary for your personal, non-commercial use. Any trademarks are the properties of their respective owners. More on Hyderabad, India. Jobs in Hyderabad.