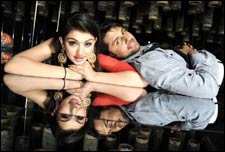 Deepa Garimella / fullhyd.com
EDITOR RATING
4.0
Performances
Script
Music/Soundtrack
Visuals
6.0
4.5
6.0
5.0
Suggestions
Can watch again
No
Good for kids
No
Good for dates
Yes
Wait for OTT
Yes
Script or no script, there's something presumably appealing - to directors - about scenes wherein a person's head/body is thrashed against a surface that's prickled with sundry metal projections. And something apparently comforting in fifty greasy deadpan goons hanging around an ageing Rayalaseema villain.

And until our directors muster the nerve to soak in another formula and make it second nature, we'll keep lapping all that up for the next decade. Right?

Formula is a feature that works when a film takes cover under superstardom and hit music. Seetharamula Kalyanam is the kind of film that takes cover under formula so hackneyed it makes the lead pair seem like seasoned performers.

Chandu (Nitin) romancing his college junior Nandu (Hansika) for the entire first half. So you have him breaking bones of those who leer at her, spouting hefty dialogues about how exams have supplementaries and love does not, and winning her over. In the second half, he heads to Seema to outwit her lusting barbarian of a suitor, the son of a faction leader.

This is not a film that contains even a single inspired moment, shot, song or dialogue, or flashes of creativity in any form - or even aspires for something on those lines. The aim's pretty low and functional, and the target audience a blurred cloud that the dart will most surely hit.

There's not much going for the plot of the movie, but if you forgave the bits of mindless limb-hacking and the general dullness of the script, it's the comedy that keeps the second half going. If you laugh easy, that is. Brahmanandam plays a lawyer who's made to think Chandu and his sidekick (Ali) are live deities who've appeared in his dream and who keep appearing in real life. It's the kind of humour that's the best that filmmakers of this stratum can come up with.

The kind of attempt at humour that might even have been charming if the villain hadn't peed onto his henchmen below while being gagged and strapped to a chandelier.

Nitin's been styled decently and acts pretty well. It's a pity he hasn't gotten a better deal in his career - still, it isn't too late, since he's unlikely to show signs of ageing in the near future. Hansika is unremarkable, given that she's given a non-role as usual. Put together the two make a pretty nice pair, and probably do enough to the film in terms of star value. Jayaprakash Reddy, Brahmanandam, Ali and Subbaraju make for some lively moments. Venu Madhav is available for a fleeting moment, though.

Insipid cinematography and pedestrian music don't exactly offend you, but keep the film floating at the level beyond which it refuses to rise and to which a lot of audiences would have to sprain their backs bothering to stoop to.

Watch Seetharamula Kalyanam... if you must, but we hope you're going in with your brain half-numb already.
Share. Save. Connect.
Tweet
SEETHARAMULA KALYANAM LANKALO SNAPSHOT

See Seetharamula Kalyanam Lankalo full details
SEETHARAMULA KALYANAM LANKALO USER REVIEWS
1 - 4 OF 4 COMMENTS
POSITIVE  |  NEGATIVE |  NEWEST  |  OLDEST  |  MOST HELPFUL  |  LEAST HELPFUL
USER RATING
4.7
3 USERS
Performances
Script
Music/Soundtrack
Visuals
6.0
4.3
4.0
4.0
Can watch again - No
Good for kids - No
Good for dates - No
Wait for OTT - Unsure
sriram224 on 6th Feb 2010, 5:42pm | Permalink
it's good
KrisRay on 28th Jan 2010, 1:11pm | Permalink
Another dud (the 13th one in a row) from the unstoppable Nitin. No one can beat him in churning out atrocious cliched utter flops one after the other. Only he can unashamedly depend on his heroines to shed cloths and pull some crowds.
>>Nitin's been styled decently
What?? he looks like a slum urchin trying to woo a village belle in those flashy and gaudy cloths.
>>and acts pretty well.
Nitin can never act... period. he can only sleepwalk.
>>It's a pity he hasn't gotten a better deal in his career
One more offer after 12 duds in a row... and you really say he hasn't gotten a better deal? this is awful
>>still, it isn't too late
Spare the Tollywood audience Pleeeeeeeeeeeease. Nitin, you better retire.

Who will be happy when Nitin's movie hits the theaters? - Zandu Balm sales guys.


Pros: Hansika
Cons: Nitin, his cloths, his dances which remind me of desparate beggers doing a jig, music, direction if at all it is there.
XLNC on 24th Jan 2010, 1:09am | Permalink
Lousy direction, bad performances, atrocious music and a story eons old and cliched make this movie another dud for Nitin.

The comedy though is good in parts and might suit the kids at best, but it has loads of violence and bloodshed in between making it unfit for children to watch.

Go for it, if you have nothing better to do this weekend, expecting it to be bad and it'll turn out to be better than you expected!

ADVERTISEMENT
This page was tagged for
seetha ramula kalyanam lanklo naas0ngs.c0m
Seetharamula Kalyanam Lankalo telugu movie
Seetharamula Kalyanam Lankalo reviews
release date
Nitin, Hansika
Follow @fullhyderabad
Follow fullhyd.com on
About Hyderabad
The Hyderabad Community
Improve fullhyd.com
More
Our Other Local Guides
Our other sites
© Copyright 1999-2009 LRR Technologies (Hyderabad), Pvt Ltd. All rights reserved. fullhyd, fullhyderabad, Welcome To The Neighbourhood are trademarks of LRR Technologies (Hyderabad) Pvt Ltd. The textual, graphic, audio and audiovisual material in this site is protected by copyright law. You may not copy, distribute, or use this material except as necessary for your personal, non-commercial use. Any trademarks are the properties of their respective owners. More on Hyderabad, India. Jobs in Hyderabad.