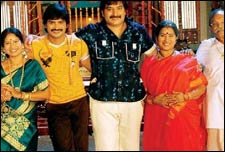 Deepa Garimella / fullhyd.com
EDITOR RATING
2.0
Performances
Script
Music/Soundtrack
Visuals
4.0
2.0
4.0
5.0
Suggestions
Can watch again
No
Good for kids
No
Good for dates
No
Wait to rent it
No
Nonstop runs for so long that by the end of it you'll need to renew your credit card, your driving license, and your passport. And it's such a lousy film you'll need a new identity after watching it anyway - no one in your life, not even you yourself, will admit knowing you if you revealed having gone to a theatre for this.

The movie starts off promisingly, with M S Narayana opening the act, but within 10 minutes of its progress your head goes into the screensaver mode. Pichaiah (M S) plays a film producer who's broke. To get rid of his financial problems and the audience all in one go, he asks a powerful don Vishnu (Suman Babu) to act as the hero in his latest film.

Now Pichaiah has a son Ajay who's a womanizer and a cheat. He keeps promising several girls he'll marry them, but dumps them all. One day, one of his girlfriends takes sleeping pills after getting rejected by him, while he simply stands there watching. Basically, Ajay is a man with fewer good qualities than there are pages in this movie's script.

Vishnu wants his sister to get married to Ajay, because he thinks he's well-mannered and cultured. The father-son duo don't say no to the don, but are scared of him lurking all around in the background. Neither of them knows the shocking reality - that in the second half he will lurk all over the foreground.

In the flashback, we discover that Vishnu is no don. He's a rich businessman whose sister Madhupriya once insisted on marrying Ajay, even when warned that he's up to no good. Her family then convinced her to marry her rustic baava, Indra, who madly loves her. However, she rudely dumped him after the wedding, for Ajay. As for Ajay, you can say he's at least being more consistent than the length of Vishnu's wig - he dumps Madhupriya.

So we learn that the first half of the film was all about Vishnu taking Indra's help in teaching Madhupriya a lesson, punishing Ajay for cheating several women, punishing Ajay's father for not bringing him up properly, and for punishing people for thinking this is a film. The makers must surely watch this flick - the only way to punish themselves would be to then watch it all over again.

Nonstop's story seems like 2 different movies strung back to back. Sitting through it feels like 15. In any case, the two halves can be easily juggled around, and the film still won't make sense. A host of badly written scenes and contrived dialogues serve to give the bad script some company.

Suman Babu is in this for himself, clearly. The other performances aren't terrible, given the presence of MS and Annapoorna in this film. The younger lot is an indistinguishable set of faces, but these actors don't do too badly in the acting department.

The production values are between decent and pedestrian, but you won't notice them with your eyes half-closed as they will anyway be during the flick. The music cannot be heard if you don't want it to be heard - just move out of the theatre and everything will be fine.

ADVERTISEMENT
This page was tagged for
nonstop movie in telugu2009
jio rockers telugu.non stop camde.suman babu movie 2009
Nonstop telugu movie
Nonstop reviews
release date
Follow @fullhyderabad
Follow fullhyd.com on
About Hyderabad
The Hyderabad Community
Improve fullhyd.com
More
Our Other Local Guides
Our other sites
© Copyright 1999-2009 LRR Technologies (Hyderabad), Pvt Ltd. All rights reserved. fullhyd, fullhyderabad, Welcome To The Neighbourhood are trademarks of LRR Technologies (Hyderabad) Pvt Ltd. The textual, graphic, audio and audiovisual material in this site is protected by copyright law. You may not copy, distribute, or use this material except as necessary for your personal, non-commercial use. Any trademarks are the properties of their respective owners. More on Hyderabad, India. Jobs in Hyderabad.