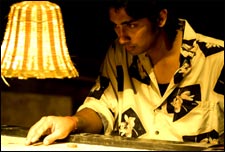 Deepa Garimella / fullhyd.com
EDITOR RATING
2.5
Performances
Script
Music/Soundtrack
Visuals
7.5
2.0
5.0
6.5
Suggestions
Can watch again
No
Good for kids
No
Good for dates
Yes
Wait to rent it
Yes
Whichever aspect of the movie you pick, Striker is a film that makes you think of several others who have done it before, and who've done it much better.

The story begins with everyone and everything in a sense of urgency and trying to be all dark and gritty. Surya (Siddharth) is in a bid to hitch a taxi to Malwani, in the wake of the 1992 riots in Mumbai. Malwani, as we come to know, is a slum whose anti-social content makes it one of the most dreaded places to be in at the time.

The flashback then opens up, showing the child Surya acquiring a growing appetite for the game of carrom. Surya's limited-means family has recently moved to Malwani, where it is promptly served the first helping of the underworld's pastimes, when a family member gets beaten up for no sane reason.

After Surya grows up, his chum Zaid (Ankur Vikal) reintroduces him to the game and to Jaleel (Aditya Pancholi), Malwani's kingpin. Jaleel lords over a gang whose operations involve a thriving underground carrom-betting enterprise. The rest of the story is about how Surya confronts Jaleel later in life and, metaphorically as we are obliged to say, knocks the coins into the pockets.

Striker's problem is that the vagueness of the first 10 minutes of the film is never set right. A lot of things keep happening in Surya's life - getting duped by an employment agency, falling in love, losing love, falling in love again, and winning a national championship - but everything seems like a distraction blocking your view of the main plot, which, incidentally, there isn't much of.

And somehow, apart from sketchy snapshots - telling you that Surya's learning the game, Surya's winning championships, Surya's losing his touch, Surya's practising hard - the "rising against all odds" part is absent.

Then, for a Hyderabadi audience, this is too Mumbaiyaa a movie - the lingo, the generous helping of Marathi, the settings, the issues.

Siddharth is miscast. He's not "dirty" enough to be in a role like this, looking more like a youngster who'd rather hang out at Cafe Coffee Day. Performance-wise, he's about okay, if you find his constant teenage-sulky expression acceptable. Aditya Pancholi, again, isn't menacing enough, while Anupam Kher is hardly around.

The better parts of the movie are Ankur Vikal, who plays Zaid, and Padmapriya, who plays the street-smart bar-owner who Surya falls for. Padmapriya has won quite a few National Awards for her work in Malayalam, so you could watch out for her worthy two cents in this movie. Seema Biswas and Vidya Malvade are spontaneous as well.

The visuals are quite good, though there's much superior work in this genre you've seen before. There's nothing in them to say that this is the '80s, except the intermittent flashes of the 'present' that is the 1992 scene of Mumbai riots, the psychedelic prints on the shirts, and a few vignettes like the knob-operated television.

The music, though, is all wrong. For one thing, there aren't any tunes you'd remember after a few months. Also, the background track is no asset to either the plot of the film or its pacing.

You don't have to rush to the head of the queue to buy tickets for this one. Wait for your turn, or better still, wait for next week.
Share. Save. Connect.
Tweet
STRIKER SNAPSHOT

ADVERTISEMENT
This page was tagged for
Striker hindi movie
Striker reviews
release date
Siddharth, Aditya Pancholi
theatres list
Follow @fullhyderabad
Follow fullhyd.com on
About Hyderabad
The Hyderabad Community
Improve fullhyd.com
More
Our Other Local Guides
Our other sites
© Copyright 1999-2009 LRR Technologies (Hyderabad), Pvt Ltd. All rights reserved. fullhyd, fullhyderabad, Welcome To The Neighbourhood are trademarks of LRR Technologies (Hyderabad) Pvt Ltd. The textual, graphic, audio and audiovisual material in this site is protected by copyright law. You may not copy, distribute, or use this material except as necessary for your personal, non-commercial use. Any trademarks are the properties of their respective owners. More on Hyderabad, India. Jobs in Hyderabad.