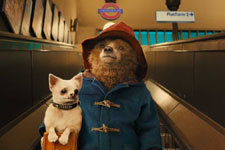 Kritika Deval / fullhyd.com
EDITOR RATING
8.5
Performances
Script
Music/Soundtrack
Visuals
9.0
7.5
8.5
9.0
Suggestions
Can watch again
Yes
Good for kids
Yes
Good for dates
Yes
Wait for OTT
No
Paddington (Ben Winshaw) is a semi-intelligent bear who comes to London from the "Darkest Peru". However, his connection to the metropolis hails from his home, from an uncle and aunt who meet an explorer, and who give the explorer the joy and wonder of acquaintance with the delightful absurdity that they are. We see all of this happening in black-and-white, a chromatic schema that endows all that it touches with an incongruous charm. What these bears take from that explorer in return, and then bestow upon our leading bear, is a love for marmalade, and a deep appreciation of all things British.

A premise this absurd can go very, very wrong, with the "wrongnesses" ranging from the slapstick to the moronic. Paddington, however, gathers up all of these potential faults, and in its warm embrace they coalesce into something wonderful. For those unaware of the basic plot because they had broken childhoods, here it is.

A young bear in the "Deepest Peru" is wrested from the bosoms of his loving family, and seeks out one Montgomery Clyde (Tim Downie) at the behest of his Aunt Lucy (Imelda Staunton). This quest leads him to Paddington Station (Of Course!), where, unbeknownst to him, Henry Brown (Hugh Bonneville) is lecturing his children on the risk factor of associating with strangers. His wife Mary (Sally Hawkins), and the aforementioned children Judy (Madeleine Harris) and Jonathan (Samuel Joslin), however, are constantly chafing at the tight leash held by the well-meaning patriarch, and when they see a bear under the 'lost and found' board, nothing would do but for them to "find" him with open arms. And thus the bear becomes a part of the Brown family, who call him Paddington, a "good English name".

Then ensues all the mayhem you would expect as Paddington grapples with an alien life as well as a murderous taxidermist, Millicent (Nicole Kidman), all while Paddington looks for the Montgomery Clyde of his childhood's myths. Bathtubs turn into boats, and marmalade sandwiches into bird-bait. Houses catch fire and wily neighbours are drafted into insidious plots.

And all this while, you, dear reader, are transported into a world where all mayhem and mischief is loved, and is completely at home. The Brown family, for instance, is the average urban family, with a strong father, a nurturing mother, and two children - a girl and a boy. However, they are also deliciously quirky, with the film explaining all of that through amusing flashes of back-story. Millicent gets her own flashback, and so does everyone else. The movie seeks to explain to its audience a truth that we, often misguidedly, shield our children from - that good and evil form a spectrum, and that good intentions can also lead to evil while evil can lead to good conclusions.

The juxtaposition of the animated Paddington against the "real" world works for this film because it seems to have accepted this incongruity as a fact of life. That is just how things are, and so the adorable bear, with its slightly dated animation, fits just right in with the chairs and the tables and all of the people even though he doesn't quite know what to do with them. The movie takes both its media, and blends them to great effect.

The background track is just as charming, and as dynamic as the plot. Director/writer Paul King, painting every frame in deft shades of malarkey, does not hold back on darkness. And so, Nicole Kidman's Millicent is quite virulently evil and obsessive, her desire to find and hurt Paddington very real. If you have a kid who spooks easy, you might want to shelve this one for the time-being. Just like Kidman with her ebullient embrace of evil, the rest of the cast too take to their roles and their various quirks like fish in tanks with an endless supply of food and very little work. This is a sense of comfort that just is. 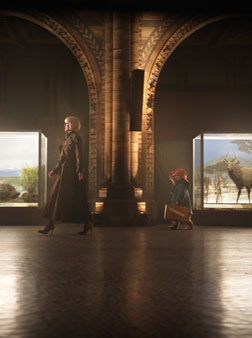 ADVERTISEMENT
This page was tagged for
Paddington english movie
Paddington reviews
release date
Nicole Kidman (Millicent), Ben Whishaw - Paddington (voice)
theatres list
Follow @fullhyderabad
Follow fullhyd.com on
About Hyderabad
The Hyderabad Community
Improve fullhyd.com
More
Our Other Local Guides
Our other sites
© Copyright 1999-2009 LRR Technologies (Hyderabad), Pvt Ltd. All rights reserved. fullhyd, fullhyderabad, Welcome To The Neighbourhood are trademarks of LRR Technologies (Hyderabad) Pvt Ltd. The textual, graphic, audio and audiovisual material in this site is protected by copyright law. You may not copy, distribute, or use this material except as necessary for your personal, non-commercial use. Any trademarks are the properties of their respective owners. More on Hyderabad, India. Jobs in Hyderabad.