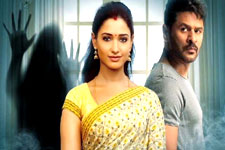 Neema Pramod / fullhyd.com
EDITOR RATING
4.5
Performances
Script
Music/Soundtrack
Visuals
7.5
3.5
2.5
6.5
Suggestions
Can watch again
No
Good for kids
No
Good for dates
Yes
Wait to rent it
Yes
When Abhinetri came out in 2016, it proved to be a refreshing break from other films promising a "horror-comedy", where horror equalled faces with garish makeup and comedy equalled loud, ear-splitting screeching of dialogue. Though Abhinetri was more comedy than horror, and had its share of flaws - including its treatment of women as the property of men - some jokes did land, and the horror angle itself was handled a bit differently. The movie, which was made in Tamil, Telugu and Hindi, did decently well at the box office, which must have inspired A L Vijay to come up with a sequel. In retrospect, poor judgement.

Abhinetri 2 opens a few years after the events in its predecessor. Devi (Tamannaah) and Krishna (Prabhu Deva) are now a happy couple with a daughter. However, circumstances take the couple to Mauritius, leaving their daughter Pooja with her grandfather. Soon Krishna begins to behave oddly, flirting with multiple women and having no recollection of his antics later.

A distraught Devi slowly realizes that her husband is possessed - by not one, but TWO ghosts- Alex and Ranga Reddy - who died before their respective lovers, Sarah (Nandhita Swetha) and Eesha (Dimple Hayati), could reveal their loves. Both men are hell-bent on using Krishna to hear those three special words from their women. How Devi manages to free her husband from their clutches, with some help from a screechy lawyer - Lalitha (Kovai Sarala) - is what this film is all about.

As far as sequels go, Abhinetri 2 isn't all that bad. For starters, it is a direct sequel, and retains a lot of characters and elements from the first part. There is a sense of continuity. I especially liked the touch that the ghosts possessed Krishna on the recommendation of Ruby (the ghost from the first film). The characters of Devi and Krishna stay true to how they were written in the prequel - except that here we get to see more of Devi, while Krishna is the one who exists just to be possessed and confused.

However, this very familiarity of the film with its prequel proves to be its undoing. In its attempts to stay true to the previous movie, Abhinetri 2 forgets to bring anything new to the table. Almost every scene is a rehash from Abhinetri, the only difference being the role reversal between Devi and Krishna. The "ghost contract", characters trying to leave a place only to end up right back there again, the one possessed by the ghost(s) being kept in the dark about what is happening with him (why doesn't Krishna figure out what is going on, since he has seen it happen before?) - all that is there here as well. Even the dialogues are similar. The best part about Abhinetri was its unpredictability - it was fun to watch Krishna and Ruby come up with innovative ways to outsmart each other. But the same methods are repeated here, rendering the film redundant.

Even the few changes Abhinetri 2 does bring in do not work for the most part. Kovai Sarala's character is absolutely unnecessary, and is a terrible misfit in this franchise that had steered clear of her brand of loud comedy in the first part. And unlike Ruby - who had a strong backstory and motive - neither of the ghosts here makes an impact. Their story is just like that of all mainstream heroes - stalking girls and making them fall for the men. So it comes as no surprise when Devi and Lalitha refer to popular films like Ghajini, Khushi and Arjun Reddy to help the ghosts woo their girls.

Despite all these flaws, Abhinetri 2 does work to an extent. And that is primarily due to Tamannaah's assured performance as Devi, a huge improvement from her portrayal of the same character in the previous film. However, the dubbing and the slang used for her here make how she speaks in this one remarkably different from that in the first film. Nevertheless, Tamannaah's efforts here make it easy to overlook this minor quibble.

The same cannot be said for Prabhu Deva, who is stone-faced for most part, but that could be because he is not given enough to work with. He has a lot more dance sequences here, but they are so terribly choreographed and shot that they look sleazy. Nandita Swetha and Dimple Hayati are just required to look glamorous, which they pull off with ease. Ajmal Ameer is fine as the terribly underwritten villain, while Kovai Sarala annoys the hell out of you. Saptagiri as Krishna's friend, and Sonu Sood as Raj Khanna reappear in the sequel, and though their cameos could have been avoided, they make for a fun watch.

A L Vijay does better as the director than the writer, managing to make even the most unnecessary scenes feel mildly exciting. You get the feeling that if he had buckled up a little, Abhinetri 2 could have been twice as better. The music, by Sam C S, is a terrible let-down, with unimpressive tunes and awful picturizations. However, excluding the song sequences, Ayananka Bose's frames ensure that the movie is easy on the eyes.

As a film, Abhinetri 2 is but a lazy rehash of its predecessor. However it still makes for a much better watch than all the Kanchanas/Munis being churned out regularly. So, watching this one might not be such a bad way to spend two hours, after all.
Share. Save. Connect.
Tweet
ABHINETRI 2 SNAPSHOT 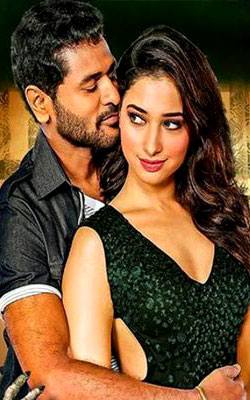 ADVERTISEMENT
This page was tagged for
Abhinetri 2 full movie
Abhinetri 2 Full Movie Telugu movierulz
abhinetri 2 in hindi
x video best abhinetri
abhinetri 2 movie in telugu movierulz
Follow @fullhyderabad
Follow fullhyd.com on
About Hyderabad
The Hyderabad Community
Improve fullhyd.com
More
Our Other Local Guides
Our other sites
© Copyright 1999-2009 LRR Technologies (Hyderabad), Pvt Ltd. All rights reserved. fullhyd, fullhyderabad, Welcome To The Neighbourhood are trademarks of LRR Technologies (Hyderabad) Pvt Ltd. The textual, graphic, audio and audiovisual material in this site is protected by copyright law. You may not copy, distribute, or use this material except as necessary for your personal, non-commercial use. Any trademarks are the properties of their respective owners. More on Hyderabad, India. Jobs in Hyderabad.