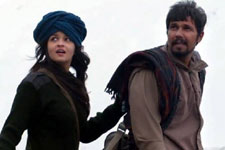 Swayamsrestha Kar / fullhyd.com
EDITOR RATING
8.0
Performances
Script
Music/Soundtrack
Visuals
8.0
7.0
8.0
8.5
Suggestions
Can watch again
Yes
Good for kids
No
Good for dates
Yes
Wait to rent it
No
There is a scene in Highway in which Alia Bhatt's character, Veera, breaks out into guttural screams amidst a gathering of immaculately dressed family members, who sit stunned and affronted in their stinking rich opulence. They are all extremely disconcerted when they are confronted by the unsettling intensity with which this young girl rejects everything that they think they have blessed her with - a swanky house and more money than she could ever spend in her entire life. They are perturbed that somewhere along the line, when they hadn't been watchful and had let her slip away, she had acquired... for lack of a better word... a soul.

The human spirit is essentially nomadic, a curious shapeless thing that keeps restlessly pacing within us, and out of our fear of its perpetual whimsicality, we build our own cages. We create lives which are heavily dependent on the presence of a system, and bolstered by the presence of such scaffolding, become thankful that we have finally suppressed that innate fitfulness. When circumstances force us to face the fact that we are always oscillating between staying still and wandering aimlessly, we are thrown off spectacularly, and this fundamental state of flux in which we are situated, by virtue of our self-awareness, is what Imtiaz Ali tackles in his latest offering.

Highway is not a perfect movie. It has its moments of dullness and flakiness. Sometimes, it meanders too much for the sake of maintaining its lead actress' credulity, and sometimes, it pontificates when it should have been contemplating. But through it all, the sheer audacity of its philosophical premise - that of portraying humans as wanderers - shines through, like a ray of pure light piercing the cold air of the Aru valley (where the most picturesque chunks of the movie were shot).

Veera Tripathi (Alia Bhatt) is the daughter of a very rich and influential industrialist. Amidst preparations for her wedding, she feels suffocated, and one night, she persuades her fiancÃ© to drive her to the national highway so that she can relax in the open air for some time. Already, we can see that she is one of those people who feel stifled in closed rooms and within social spaces that are governed by stringent formats (all that gushing over jewellery, costumes, and other wedding paraphernalia does seem like mechanical cheering after a while).

On the highway, Veera is kidnapped by a gang of goons, led by Mahabir (Randeep Hooda). She is brutally gagged, and unceremoniously stuffed into the back of a truck. The gang are on the move because they don't want to risk being caught. And so, in captivity, Veera begins her journey towards freedom.

On the way, she learns to unlearn all the city ways that her upbringing had equipped her with. She learns, the hard way, that sometimes, you just can't escape because there is nowhere to escape to. She learns that you can come to love without wanting to possess. She learns that destinations are over-rated, and that the journey is of the utmost importance.

Mahabir is a stark contrast to Veera. He is a wounded man who knows, quite intimately, what it feels like to be an occupant of the lowest rung in the socio-economic hierarchy. He knows what it feels like to be poor and being mistaken for an uncouth animal. When Veera starts to get comfortable with her situation and surroundings, Mahabir eyes her with cautious curiosity, not easing up in his staunch belief that rich people cannot be trusted, that these "amiran"s are soulless because of their oblivious surrender to material wealth.

While they inch around each other - Veera becomes bolder with each passing day, and Mahabir's angry outbursts quietly soften into a disgruntled sulking - the narrative takes them through the heartbreakingly beautiful terrains which this country abounds in. The ravaged deserts of Gujarat undulate infinitely under a pendulous moon, and the grimy wastelands of UP give way to the crisp mountain landscapes of Kashmir. Cinematographer Anil Mehta's camera captures the inherent scenic grandeur of all the places that the narrative inhabits, and makes this reviewer want to rate the film's visuals a solid 10. Seriously, there is nothing that Mehta's camera doesn't turn utterly enchanting.

A R Rahman's music in Highway is the quintessential traveller's playlist, with its light airy tunes (Pattakha Gudi and Maahi Ve are especially memorable).

The film's flaws occur in its screenplay. While Stockholm Syndrome is a well-known psychological affliction, we are made to believe that Veera's growing attachment to Mahabir was not merely an implosive manifestation of PTSD (post-traumatic stress disorder). But, the way in which this thought is sketched out in the movie is not convincing enough, and at times, feels too hurried. Veera gets comfortable around her captors too quickly.

Alia Bhatt is spell-binding as Veera. While she starts out on a shaky footing, her performance gains strength as the movie progresses, and coincidentally, fortifies and makes more believable, her depiction of a delicate maiden who transforms into a hardened adventurer.

Randeep Hooda is a revelation. Seriously, the guy smiles heartily only once in the entire movie, and it is a testament to the remarkable restraint with which Hooda fleshes out the cranky Mahabir that the smile feels like a warm shot of toddy on a cold winter night.

Imtiaz Ali has given us a very difficult movie this time. Although his characters engage in the most unbelievable of antics - Veera breaks out into groovy dance moves in the middle of a rundown garage lined with barrels of petrol, and one of the kidnappers even joins her - they look so uncannily believable and relatable while doing it that you are forced to ponder upon Ali's grasp of the human nature.

And doesn't human nature tell us that we can be heroes?
Share. Save. Connect.
Tweet
HIGHWAY SNAPSHOT 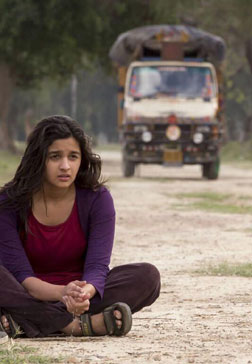 ADVERTISEMENT
This page was tagged for
Highway hindi movie
Highway reviews
release date
Randeep Hooda, Alia Bhatt
theatres list
Follow @fullhyderabad
Follow fullhyd.com on
About Hyderabad
The Hyderabad Community
Improve fullhyd.com
More
Our Other Local Guides
Our other sites
© Copyright 1999-2009 LRR Technologies (Hyderabad), Pvt Ltd. All rights reserved. fullhyd, fullhyderabad, Welcome To The Neighbourhood are trademarks of LRR Technologies (Hyderabad) Pvt Ltd. The textual, graphic, audio and audiovisual material in this site is protected by copyright law. You may not copy, distribute, or use this material except as necessary for your personal, non-commercial use. Any trademarks are the properties of their respective owners. More on Hyderabad, India. Jobs in Hyderabad.