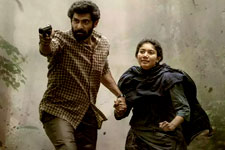 Aditya Devulapally / fullhyd.com
EDITOR RATING
5.0
Performances
Script
Music/Soundtrack
Visuals
7.0
4.0
6.0
6.0
Suggestions
Can watch again
No
Good for kids
No
Good for dates
No
Wait for OTT
Yes
Maybe somewhere there is a comrade film manifesto that says:

1. Ye shall not make a comrade film fun.

2. Ye shall not make a comrade film without heavy, poetic dialogues.

3. Importantly, ye shall never, ever attempt a comrade film without tragedy. Thou shall make sure peepers turn into weepers.

Before any communistic or left-leaning individuals take offence, let me assert, for your peace of mind: films like Virata Parvam are almost always made with noble intent. The heart of the filmmakers is in the right place. But the mind, the body and the spirit are what I'm worried about.

When I was seriously watching this movie, a disturbing thought struck me: "How would Annalu text with all that poetic lingo?"

Mom: Making breakfast. What will you have, plain dosa or masala dosa?

Vennela (Sai Pallavi) is an innocent village girl who stumbles upon censored literature authored by Comrade Ravanna (Rana Daggubati). As she reads his work, she is left spellbound and falls head-over-heels for this man who keeps talking about "revolution" and "bourgeois". All that reading ignites a spark in her, making her leave home and go on an intense journey in pursuit of Ravanna's troop. How far will she go to attain her love?

What works for the movie is that it's made by an unpretentious mind. If someone with explicit ideas, say Pa Ranjith, made this film, they'd probably convince you that this is the right way. But Venu Udugula never shies away from exploring the inner battle that communists go through. You can replace the idol in the temple, but it's going to be visited by the same humans. How the revolution is going to end is dependent on the revolutionaries. They too are, after all, human. Do you have to kill the human in you to make humanity win, the movie asks bluntly.

Regardless, the film takes a lousy path to make this point. The screenplay never takes a moment to pause and reflect - it rushes from one action scene to another. All that mindful framing and brilliant usage of natural light by Dani Sanchez-Lopez and Divakar Mani are gone for trash in split-second cuts. Guns blaze, blood spills, people scream, and amidst all of that, the love you were feeling, you never manage to carry it till the end. Though it's filled with thought-provoking dialogues and poems, the film fails to do its exact job - to provoke you. You root for neither love nor justice.

However, one thing is irrefutable - Sai Pallavi's act in this one is a tour de force. Right from that introductory extreme close-up of her eyes to the final shot of her back, she sears through your soul. She is one of those rare performers who imbue life into their characters. You perceive Vennela as a living, breathing person, with every action and expression just palpable. Most times when an actor utters on screen that they love someone, it takes a pushy romantic background score to convince you. But that's never the case with Vennela - when she confesses her love for Ravanna, you are totally in sync.

In one of her interviews for the film, Sai Pallavi said that she likes reading scripts over getting narrations. When you read a character over hearing about it, you are free to imagine it however you like. That's precisely when your own personality and skill add texture to even an innocent village girl character painted with broad strokes. You draw energy from your inner reserves to supply additional nuances that the author never wrote. The film Virata Parvam may not stay with you, but Vennela will.

Rana Daggubati continues his streak of pitiful experiments. Why pitiful? Because none of his experiments - in a critical sense - is bad. Even his off-beat films like Aranya have something to offer for the thinking human. But the problem is in the narrative department. They suffer from either erratic screenplays or the inability to hook the audiences emotionally. It always seems like there is a barrier between Rana the actor and Rana the storyteller. Nevertheless, the man cannot be found at fault because his script choices continuously show his bravura. He is, without any doubt, one of the fiercest rebels working in today's cinema. He adds gravitas to the role of Ravanna with his intense voice, and you'll wish there were more scenes with his voice-over layered with Sai Pallavi reading.

Few will call Virata Parvam a bad film - they might at worst find it underwhelming. But the movie certainly has solid reasons to watch it, including Sai Pallavi's electrifying performance and the surprisingly nuanced take on a sensitive subject.
Share. Save. Connect.
Tweet
VIRATA PARVAM SNAPSHOT 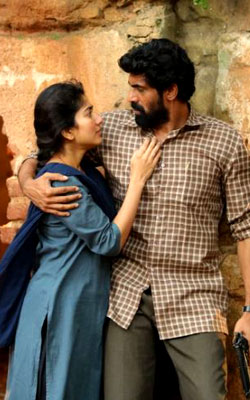 ADVERTISEMENT
This page was tagged for
Virata Parvam telugu movie
Virata Parvam reviews
release date
Sai Pallavi, Rana Daggubati
theatres list
Follow @fullhyderabad
Follow fullhyd.com on
About Hyderabad
The Hyderabad Community
Improve fullhyd.com
More
Our Other Local Guides
Our other sites
© Copyright 1999-2009 LRR Technologies (Hyderabad), Pvt Ltd. All rights reserved. fullhyd, fullhyderabad, Welcome To The Neighbourhood are trademarks of LRR Technologies (Hyderabad) Pvt Ltd. The textual, graphic, audio and audiovisual material in this site is protected by copyright law. You may not copy, distribute, or use this material except as necessary for your personal, non-commercial use. Any trademarks are the properties of their respective owners. More on Hyderabad, India. Jobs in Hyderabad.