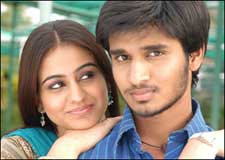 Deepa Garimella / fullhyd.com
EDITOR RATING
5.5
Performances
Script
Music/Soundtrack
Visuals
7.0
5.0
8.0
6.0
Suggestions
Can watch again
No
Good for kids
No
Good for dates
Yes
Wait for OTT
No
It takes effort, but it is possible, to be brainwashed into believing that a chocolate-faced, wise-guy not a day older than 21, can smash a thousand jaws and get away with it. But it's asking a bit much when they name that chocolate-face Babu, and make him romance a girl called Baby.

However, Babu rules Yuvatha (politically-shaded puns are purely coincidental and bear no relation to the theme of this review), and if you like him, you'll vote for Yuvatha, even if the title is slightly irrelevant, the leading man gets a bit rude once in a while, the story has a lot of loose ends, and there are a million references to big stars throughout the campaign. Getting back to the film, if you like Nikhil, you'll like Yuvatha.

Babu (Nikhil) is your typical oorodu. That means he dances at all the village fairs, he's a member of the Chiranjeevi's fans' association, and most important of all, he kicks a lot of dust all the time. And he's brash. In fact, he's so hot-headed, he makes Ravi Teja seem polite.

One day, he furiously stomps his way to the city in order to escape his mean relatives in the village and to assert his independence. He moves in with this bunch of has-beens who are struggling to arrive in life. In the city he chances upon Baby (Aksa), and they fall in love, and a nice little I-swear-by-my-friends gang is cozily in place.

One day, Babu's violent display of protectiveness (though we doubt that "nuvvu NAA daanivi!" will go down in history as the most thrillingly romantic line ever) towards his girl leads to a gory fight in which his friend's skull is fractured. For the operation, Babu and his friends fail to cough up money from sources on the right side of the law, that include insensitive parents, rude bosses, and cripplingly rule-bound banks. They then borrow from a gangster (Narsing), but life has only just started goofing up, and Babu and Ranadhir land up in jail for a robbery they never committed.

The rest of the story is about how things are set right. Of course, not without Babu's 15 minutes of Munnabhai-ism, complete with the item-girl-act, to light up the life of hardened criminals, one of whom is about to go to the gallows.

Yuvatha supposedly deals with friendship, but everyone in the story is a caricature, and subtlety is down to zilch. Moreover, parts of the film are not believable by any stretch of imagination, including the premise that started it all - the whole bit about the comatose friend brought home from the hospital, who is not attended to beyond two days, and the heartless world that refuses to show any kind of concern to this bunch of suffering youngsters. Also, there's too much of blood-gurgling, and that's out of place, too.

Nikhil is the actor this film's made for - he gets all the songs, all the fights, all the best lines, and all the audience rooting for him - and he does a vigorous, lower-lip-gnashing, fiercely enthusiastic job of it. His angry-young-man thing goes overboard, but his comic timing is firmly in place. Still, minus the shrieking and incessant whacking, he would have been more likeable. He's the best take-away yet from the Happy Days party, and we're pretty certain his talent could have been better used.

Aksha is a pleasant watch, despite the double chin, and acts pretty well in the limited role she's given. Ranadhir is okay as the second lead, but it's those sequences in which he's sobbing that are embarrassing to watch - so much so that you search for Nikhil to rescue the scene. The rest of the characters are, like we said, mere caricatures, with Sayaji Shinde exemplifying what a film is willing to do to itself just so the hero will shine through.

The music is a huge plus, and with those breezily shot songs and the bright visuals, you are almost led to believe this is a youthful romance or a film about plain old friendship.

Yuvatha is a decent, light-hearted watch with some good songs, and more importantly, with Babu.
Share. Save. Connect.
Tweet
YUVATHA SNAPSHOT

ADVERTISEMENT
This page was tagged for
yuvatha movie
Yuvatha
Yuvatha telugu movie
Yuvatha reviews
release date
Follow @fullhyderabad
Follow fullhyd.com on
About Hyderabad
The Hyderabad Community
Improve fullhyd.com
More
Our Other Local Guides
Our other sites
© Copyright 1999-2009 LRR Technologies (Hyderabad), Pvt Ltd. All rights reserved. fullhyd, fullhyderabad, Welcome To The Neighbourhood are trademarks of LRR Technologies (Hyderabad) Pvt Ltd. The textual, graphic, audio and audiovisual material in this site is protected by copyright law. You may not copy, distribute, or use this material except as necessary for your personal, non-commercial use. Any trademarks are the properties of their respective owners. More on Hyderabad, India. Jobs in Hyderabad.