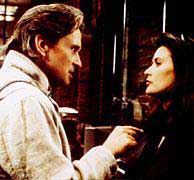 It all starts off when Tom Sanders (typical American, beautiful wife, cute children etc) leaves for work after receiving a call about a promotion (his, you'd assume) only to reach his office and hear rumors about him losing his job.

Tom works for a major computer firm that deals in hi-fi programmes (so hi-fi that you wouldn't understand what they sell), and now his job is on the line because of a merger that his company is having with another. Tom is desperate to find out if his job is going for sure. Uptight as he is, he comes across an old flame Merdith, and when he goes to her office for an innocent drink (stupid of him since he knows she has a thing for him) things get out of hand, and Tom gets jumped by Merdith (sexually, believe it or not). Well, not completely, since he stops it, but not after he almost enjoys it, or so it seems.

Outraged at being turned down, Merdith declares war and accuses Tom of sexual harassment, and in retaliation Tom accuses her of doing the same (now that's a new one!).

This is the thin plot around which the whole story is woven, and if you take away this incident from the movie, what's left of it is a bunch of people talking computer language so fast that you need a 512MB RAM to keep pace. As for the virtual reality scene, it beats me as to what purpose it was intended to serve.

The movie somehow makes it to the finish line as an entertainer, mainly because the producers managed to rope in Michael Douglas, Demi Moore and Donald Sutherland, whose performances somehow leave you impressed.
Share. Save. Connect.
Tweet
DISCLOSURE SNAPSHOT

ADVERTISEMENT
This page was tagged for
Disclosure english movie
Disclosure reviews
release date
Michael Douglas
theatres list
Follow @fullhyderabad
Follow fullhyd.com on
About Hyderabad
The Hyderabad Community
Improve fullhyd.com
More
Our Other Local Guides
Our other sites
© Copyright 1999-2009 LRR Technologies (Hyderabad), Pvt Ltd. All rights reserved. fullhyd, fullhyderabad, Welcome To The Neighbourhood are trademarks of LRR Technologies (Hyderabad) Pvt Ltd. The textual, graphic, audio and audiovisual material in this site is protected by copyright law. You may not copy, distribute, or use this material except as necessary for your personal, non-commercial use. Any trademarks are the properties of their respective owners. More on Hyderabad, India. Jobs in Hyderabad.