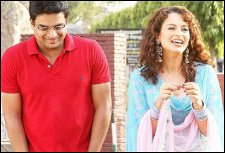 Kakoli Mukherjee / fullhyd.com
EDITOR RATING
5.0
Performances
Script
Music/Soundtrack
Visuals
7.0
3.5
6.0
7.0
Suggestions
Can watch again
No
Good for kids
Yes
Good for dates
Yes
Wait for OTT
Yes
When fate brings together two individuals as different as chalk and cheese, be sure of a lot of fireworks.

Indeed, you can't find much fault with the premise of Tanu Weds Manu. And fireworks there are, too. Still, the fireworks fail to keep you amused till the end, as a superfluous heroine and a slackening pace dampen the cackling bonhomie that the film starts with. Fortunately, though not helped much by the chemistry between its main leads, the movie does have its share of bright spots in the form of peppy dialogues, elaborate settings, and the brilliant performances put in by some of the cast-members.

The first ten minutes of the movie build the premise for the whole story where a somber cardiologist from London, Manu Sharma, comes to Kanpur to consider Tanuja Trivedi (Kangana Ranaut) as a prospective bride. By rules only known to Cupid, Manu still falls for a Tanu who's sedated herself with vodka and sleeping pills to put him off, and shyly nods his consent to the marriage.

But Tanu will have none of it - puffing at a cigarette, she insensitively tells the doctor to pack his bags home as she already has a boyfriend. The heart-broken Manu leaves Kanpur, but a second innings starts taking shape for Tanu and Manu when they meet again at a friend's wedding.

Manu gives it his all this time to win the heart of his eccentric lady-love, but stomping on his feelings all over, Tanu drinks, smokes and breaks into raunchy dance moves, and also prepares to marry her boyfriend (Jimmy Shergill). Though his friends mock him, rebuke him and pity him in turns, Manu, for whom falling in love was the biggest event of his life, does not give up on his stoic tenacity, and things slowly start turning his way when Tanu's friend Payal (Swara Bhaskar) tries to make the rebellious heroine embrace a secure and sane life.

Though peppered by quite a few delightful moments, the story is packed with cliched characters. While Manu's obsessive love and altruist bends remind you of Ajay Devgan in Hum Dil De Chuke Sanam, the non-conformist Tanu brings Kareena of Jab We Met and Deepika Padukone of Break Ke Baad to your mind.

Also, the script paints the two opposites as caricatures, and at one point you find Manu's fixation for Tanu a bit over the top, especially when Tanu does not do anything that can be termed sensible. Further, an unnecessarily stretched climax keeps you waiting impatiently for the inevitable to happen, as the noble hero goes on about what is right.

Kangana, hidden behind layers of make-up, fails to portray the free-wheeling, liberated girl with conviction, and her dialogue-delivery is a real bummer.

On the other hand, Swara Bhaskar as Payal is brilliant, and her perfect Bihari diction lends authenticity to the character who belongs to Patna. Another memorable performance is delivered by Deepak Dobriyal, who is pained at his master-cum-friend's loss of self-esteem every time, but rejoices the most when he sees the flicker of a smile on his face. Deepak and Madhavan share an easy camaraderie, and the exchanges between them are the most cherishable moments in the film.

Jimmy Shergill is good as the uncouth, good-hearted UP ke bhaiyya, and Eijaaz Khan as Jassi is impressive.

The film's music by Krsna is melodious, specially the Qawwali number "Rangrez", which crops up many times during the movie.

The cinematography by Chirantan Das is top-notch, as his camera absorbs the choc-a-bloc landscape of Lucknow and the riotous colors of a Punjabi wedding deftly.

Give Tanu Weds Manu a shot for a few saccharine moments, and if you want to go awww as Madhavan endearingly smiles away all the slights inflicted by love.
Share. Save. Connect.
Tweet
TANU WEDS MANU SNAPSHOT

ADVERTISEMENT
This page was tagged for
tanu weds manu hindi movie
Tanu Weds Manu hindi movie
Tanu Weds Manu reviews
release date
R Madhavan, Kangana Ranaut
Follow @fullhyderabad
Follow fullhyd.com on
About Hyderabad
The Hyderabad Community
Improve fullhyd.com
More
Our Other Local Guides
Our other sites
© Copyright 1999-2009 LRR Technologies (Hyderabad), Pvt Ltd. All rights reserved. fullhyd, fullhyderabad, Welcome To The Neighbourhood are trademarks of LRR Technologies (Hyderabad) Pvt Ltd. The textual, graphic, audio and audiovisual material in this site is protected by copyright law. You may not copy, distribute, or use this material except as necessary for your personal, non-commercial use. Any trademarks are the properties of their respective owners. More on Hyderabad, India. Jobs in Hyderabad.