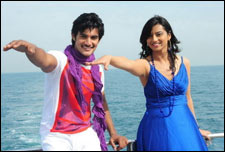 Deepa Garimella / fullhyd.com
EDITOR RATING
3.5
Performances
Script
Music/Soundtrack
Visuals
6.0
3.0
6.0
6.5
Suggestions
Can watch again
No
Good for kids
No
Good for dates
No
Wait to rent it
Yes
There is mediocrity, there is baloney, and then there is plain refusal to apply any thought to what you're doing. When a film's climax consists of an NCC cadet single-handedly killing a dangerous ISI terrorist and bringing him to the police on his bike as he would a bag of groceries, it shows you how confident the makers were that no one in the audience would last long enough to watch that.

Filmed by the man who once gave us this and this, Prema Kavali is to movies what Mamta Banerjee is to the Tata Nano. For those who'll settle for low standards, though, here's what transpires.

With a truckload of vacuum for a script, Prema Kavali is a simplistic college romance, with a bit of blackmail intrigue thrown in. Prema (Isha Chawla) is being blackmailed by a villain (Shafi), with an incriminating photograph, and she keeps secretly coughing up lakhs of rupees (from her rich dad's cupboard, no less) to shut this creep up. What does the photograph contain? Who is blackmailing her? Why is Prema so scared? Why does it feel like 3 hours in the first 3 minutes of the film?

From here on, the movie sails off into teenage bubblegummy glory, with a flashback involving the hero Sreenu (played by the rather enthusaistic Aadi, Saikumar's son) going all out to woo the demure-but-curt Prema. In a high-hormone moment, Sreenu gives Prema a full-throttle kiss - it is something that the infuriated Prema slaps him for, and also something that our stalking villain gleefully captures on his camera. Prema and Sreenu have a face-off after this, but the blackmailers are thrilled.

Prema's dad (Nasseer) is the superintendent of the Chanchalguda jail, and the villains need his email password to know the whereabouts of a hardened Pakistani terrorist, who they will now hand over to the ISI for a crore of rupees. Naturally, they use Prema to get the password out of her dad. The rest is history, and so are you if you're still watching.

Prema Kavali strives to woo the college crowd, with its campus comedy, photogenic homes and foreign locales, but is well out of the league it enters. Despite being a film with decent production values, it suffers from bland writing, an immature story, a weak romance, and ridiculous plot twists. Brahmanandam and Ali obviously lend some weight with their presence, but the comedy is sad.

The lead pair, evidently, is eager to deliver. Aadi is high on confidence, but might want to tone up his fashion sense a little. He's a good dancer, and is fairly expressive, too. Isha Chawla is good-looking, and she seems pretty talented for a newbie.

Nasseer is a heavyweight in a rather silly role, Shafi and Dev Gill seem wasted, and it's sad to see Singhu Tolani already relegated to "sister" roles.

Some spirited songs showcase the young couple's Tollywood-dance-specific skills, and a few are hummable as well. There are way too many songs, though.

ADVERTISEMENT
This page was tagged for
Prema Kavali telugu movie
Prema Kavali reviews
release date
Aadi, Isha Chawla
theatres list
Follow @fullhyderabad
Follow fullhyd.com on
About Hyderabad
The Hyderabad Community
Improve fullhyd.com
More
Our Other Local Guides
Our other sites
© Copyright 1999-2009 LRR Technologies (Hyderabad), Pvt Ltd. All rights reserved. fullhyd, fullhyderabad, Welcome To The Neighbourhood are trademarks of LRR Technologies (Hyderabad) Pvt Ltd. The textual, graphic, audio and audiovisual material in this site is protected by copyright law. You may not copy, distribute, or use this material except as necessary for your personal, non-commercial use. Any trademarks are the properties of their respective owners. More on Hyderabad, India. Jobs in Hyderabad.