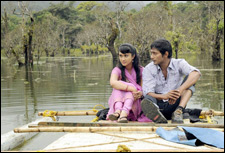 Deepa Garimella / fullhyd.com
EDITOR RATING
4.0
Performances
Script
Music/Soundtrack
Visuals
5.0
3.0
7.0
7.5
Suggestions
Can watch again
No
Good for kids
Yes
Good for dates
Yes
Wait for OTT
Yes
In Kudirithe Kappu Coffee, the leading lady nurtures an entrepreneurial dream, and the hero gets to sort out his existential puzzles when he discovers his calling in life. Love happens, but only in the backdrop of blossoming careers, in a rare film that never overrates the significance of romance in a typical 20-something's life.

It is also a film that doesn't worry as much about pace as it does about trying to capture little details that it deems precious. Weighty drama doesn't fog up the journey, and in its place is a decidedly down-to-earth treatment of everyday hopes and heartaches.

Tragically, though, KKC is a flick that stumbles, flounders and staggers under the very weight of the high standards it sets itself. Afflicted by tacky dialogues, tackier performances, and an incredibly slow pace, the movie never rises beyond being an amateur offering.

The director forcibly spelling out what he wants to convey - i. e. , that "love is not about being happy together; it is about not being able to live without each other" - doesn't help. His disputable definition of love isn't the problem here, in a script that wastes too much time setting the stage and not doing much else.

The movie is about how the laid-back Venu (Varun Sandesh) and the chirpy and ambitious hotel management graduate Lasya (Suma Bhattacharya) get together, through a shared endeavour of turning a quaint hill-station coffee shop into a profit-making venture. Lasya's aging grandmother (Sukumari) holds on to memories of the coffee shop since she's been running it for some time now, but a scheming lodge-owner (Tanikella Bharani) keeps devising ways to take over the place.

While the essence of the plot is imaginative in quite a few ways - the profession chosen, the overall sequence of events, and the locales the story is set in - the story-telling is far too flawed. For one, there are several awkward and pointless gaps between dialogues, stretching most scenes beyond their logical conclusion (and the film itself to a painful run time). The dialogues themselves are badly-written, and the attempts at comedy fail to make a mark.

In the end, when the director finally sets out to prove his point of love being judged by the pangs of longing, he does so using an inconsequential sequence that has less romance than the entire film does.

And with the exception of Sivanarayana, Tanikella Bharani and Sukumari, the performances are unskilled. Suma Bhattacharya is good at the smiles and the grins, but her character isn't written too well. Varun Sandesh can take credit for starring in a film far better than his recent ventures, and in a more restrained role than others, but he might want to work on his diction, his physique, and on his acting.

KKC is also an innovatively-designed product, right from the slick title credits, to the use of cute animated figures to accompany the narrative at times. Being set in a picturesque hill station makes this a pretty film, too. And the music is quite refreshing, thanks to the liberal use of unconventional, folksy tunes.

ADVERTISEMENT
This page was tagged for
kudirithe kappu coffee watch
Kudirithe Kappu Coffee full movie
Kudirithe Kappu Coffee telugu movie
Kudirithe Kappu Coffee reviews
release date
Follow @fullhyderabad
Follow fullhyd.com on
About Hyderabad
The Hyderabad Community
Improve fullhyd.com
More
Our Other Local Guides
Our other sites
© Copyright 1999-2009 LRR Technologies (Hyderabad), Pvt Ltd. All rights reserved. fullhyd, fullhyderabad, Welcome To The Neighbourhood are trademarks of LRR Technologies (Hyderabad) Pvt Ltd. The textual, graphic, audio and audiovisual material in this site is protected by copyright law. You may not copy, distribute, or use this material except as necessary for your personal, non-commercial use. Any trademarks are the properties of their respective owners. More on Hyderabad, India. Jobs in Hyderabad.