A View To A Kill Review 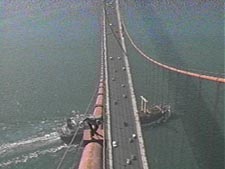 Rekha Rao / fullhyd.com
EDITOR RATING
5.0
Performances
Script
Music/Soundtrack
Visuals
NA
NA
NA
NA
Suggestions
Can watch again
NA
Good for kids
NA
Good for dates
NA
Wait for OTT
NA
The Bond is at it again. So what if we last saw this incarnation fifteen years ago? Starring Roger Moore, who donned the famous spy's mantle after Sean Connery, A View To A Kill is not just a return to the Bond brand of entertainment, but also a return to the decade of the '80s. And it is also noteworthy for certain special reasons: it was the swansong of two long time Bond actors - Lois Maxwell, who played Miss Moneypenny for 23 years, and Moore himself, who ended his 12 year and 7 film run as James Bond with this film.

Yet, watching this 1985 release is a slightly dated experience, especially given the astounding realism and sophistication of today's computer generated effects. While it has the traditional ingredients of any Bond film - great villains, exotic locations, beautiful women and terrific stunts and action scenes - there are certain flaws as well.

The story revolves around a brilliant but perverted industrialist, Max Zorin (Walken), who wants to take over Silicon Valley and propagate his own microchip industry. Bond's (Moore) efforts to stop his diabolic plans take him to Paris, and then to the United States - San Francisco, to be precise.

Christopher Walken as the berserk and psychotic Max Zorin, and Grace Jones as May Day, his silent, mysterious sidekick, make for great and memorable villains. But Tanya Roberts as Stacey Sutton is perhaps the worst Bond girl ever - she certainly takes the prize for the whiniest ever. At every given opportunity she screams for help, leaving Bond with an eternally dependent damsel in distress to deal with. As beautiful as she is, she can't act to save her life. Her conspicuous moment is at the end when she rushes to embrace Bond and fails to notice the giant blimp that is out to kidnap her!

The movie does have its redeeming features - Zorin and May Day's chillingly evil characters, Duran Duran's title song, the mine escape, a car chase through Paris and a death defying leap from the Eiffel Tower are among its highlights. And how can one forget the superb climax scene atop the Golden Gate Bridge in San Francisco where Bond and Zorin fight it out?

If you're a James Bond fanatic, then you have probably already seen this movie. If you haven't, then here's your chance - while it might not be one of the best in the Bond series, it certainly has its moments.
Share. Save. Connect.
Tweet
A VIEW TO A... SNAPSHOT
A VIEW TO A KILL SNAPSHOT

ADVERTISEMENT
This page was tagged for
A View To A Kill english movie
A View To A Kill reviews
release date
Roger Moore, Christopher Walken
theatres list
Follow @fullhyderabad
Follow fullhyd.com on
About Hyderabad
The Hyderabad Community
Improve fullhyd.com
More
Our Other Local Guides
Our other sites
© Copyright 1999-2009 LRR Technologies (Hyderabad), Pvt Ltd. All rights reserved. fullhyd, fullhyderabad, Welcome To The Neighbourhood are trademarks of LRR Technologies (Hyderabad) Pvt Ltd. The textual, graphic, audio and audiovisual material in this site is protected by copyright law. You may not copy, distribute, or use this material except as necessary for your personal, non-commercial use. Any trademarks are the properties of their respective owners. More on Hyderabad, India. Jobs in Hyderabad.