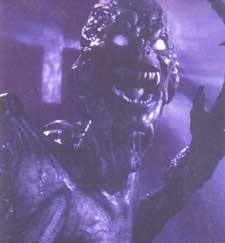 Christopher Domingo / fullhyd.com
EDITOR RATING
5.0
Performances
Script
Music/Soundtrack
Visuals
NA
NA
NA
NA
Suggestions
Can watch again
NA
Good for kids
NA
Good for dates
NA
Wait to rent it
NA
Welcome to 'Ferren Woods', a quaint little town in America, which was also the home of Tommy, a grotesquely disfigured young man, called the 'pumpkin head', and brutally murdered by a group of youngsters in the 1940s. Braddrock, who spent his childhood in Ferren Woods, is now the new sheriff in town. Everything is fine except for his rebellious daughter Jenny, who has joined the wrong bunch of youngsters.

One fateful night they run over a blind old woman. She survives, though, and warns them to stay away from the woods. Pigheaded as they are, they continue frequenting the area. One night they dig up Tommy's grave and practice amateur séance, unwittingly resurrecting Tommy, the pumpkin head, and burning the house of the old woman (Tommy's mother) with her in it. And Tommy has now turned into a monster, looking like a cross between ET, a bat and a lizard.

There's a local rhyme that goes:

Bolted doors and windows barred,
Guard dogs prowling in the yard
Won't protect you in your bed -
Nothing will stop the 'pumpkin head'

Sure enough, it goes around killing the murderers in standard monster style. It doesn't spare anyone except for Braddock's daughter because when Tommy was a kid, Braddock had once saved Tommy's life. With vengeance accomplished, Tommy returns to the nether world.
A just about okay flick. The monster is not that scary, and the movie seems like a rehash of all horror films.
Share. Save. Connect.
Tweet
BLOOD SUCKER SNAPSHOT

ADVERTISEMENT
This page was tagged for
Blood Sucker english movie
Blood Sucker reviews
release date
Anni Dolenz, Andrew Robinson
theatres list
Follow @fullhyderabad
Follow fullhyd.com on
About Hyderabad
The Hyderabad Community
Improve fullhyd.com
More
Our Other Local Guides
Our other sites
© Copyright 1999-2009 LRR Technologies (Hyderabad), Pvt Ltd. All rights reserved. fullhyd, fullhyderabad, Welcome To The Neighbourhood are trademarks of LRR Technologies (Hyderabad) Pvt Ltd. The textual, graphic, audio and audiovisual material in this site is protected by copyright law. You may not copy, distribute, or use this material except as necessary for your personal, non-commercial use. Any trademarks are the properties of their respective owners. More on Hyderabad, India. Jobs in Hyderabad.