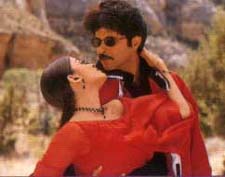 Pratima Agnihotri / fullhyd.com
EDITOR RATING
7.0
Performances
Script
Music/Soundtrack
Visuals
NA
NA
NA
NA
Suggestions
Can watch again
NA
Good for kids
NA
Good for dates
NA
Wait to rent it
NA
He is a knight in shining armor - scion of a richie-rich business, this MBA can bash up any baddie and has a strong socially-aware conscience. The right prince to save a damsel in distress, right? Yes, that's Avinash (Anil Kapoor) for you. And he stays in a swanky colony that represents the entire gamut of all the social and moral flaws of our country.

Right at the crossroads of this colony, a powerful local lord almost murders a teacher who questions the landshark's misappropriation of the land meant for a school. A brave girl Preeti (Aishwarya Rai) gives evidence against the miscreants. As usual, the baddies manage to get out of prison before you can say "free". And their first target is the girl who got them in there. The younger brother of the unusually well-connected baddie rapes her, and thus starts a nightmare in her life.

Ostracized by her family and taunted by almost everybody, she is easily targeted until she meets Avinash who gives her all sorts of support, emotional and financial. In her company, he can extend parenthood to the unsupported children that his father's hapless mistress of a secretary mothered. Life is all friendship and good times, when the loose talk in his office makes him realize that he loves her, but she is not ready to further burden him with her responsibility.

In walks Khushi (Sonali Bendre), his childhood buddy whom everybody wants him to marry. What happens next? How does Preeti realize what her heart really wants? Why does Avinash's mother plead with Preeti to leave her son alone? To know the answers, watch this Boney Kapoor production.

The film, a remake of Pellichesukundaam Raa starring Venkatesh, is a sensitive enough depiction of the pain and the humiliation that a violated woman faces in a hypocritical society that is moreover governed by muscle and money power. What dilutes it, however, is the not so funny, and at times downright insufferable, farce (especially impossible is Anupam Kher as a lascivious Tamilian) that the neighborhood provides. Moreover, the film, which deals with such a sensitive issue, should have avoided the typical filmi predictability, which twists the plot into an easily recognizable pattern.

Nevertheless, it is worth a watch because the cast has put in pretty creditable performances. Anil Kapoor brings to his idealistic role a realism that makes it acceptable. Aishwarya Rai, with her stunning beauty, manages to make the audience empathize with the predicament of the heroine. The surprise package of the film, however, is Sonali Bendre, whose cameo role as a girlie buddy with a heart of gold shows that the kudos that have been coming her way are really worth it. Neither the lyrics, nor the music, nor the cinematography are much to write home about.

The film really shows up the rot that is eating at the roots of our honor-ruled country. And this malaise has both a political and an ethical identity. The film, however, never provides any really honorable proposals to tackle such issues. How many Prince Charmings can really come forward to re-locate the life of an innocent girl who suffers for her conscientiousness? Especially in a country where machismo often dons a rapist's mask, a fact which is further complicated because of the selfish social workers and the irresponsible media as the film itself shows?

True, nobody expects a verbose and melodramatic bhashan, but the film would have been less escapist if more easily accessible proposals to better the lot of a traumatized girl were put forth.
Share. Save. Connect.
Tweet
HAMARA DIL AAPKE PAAS... SNAPSHOT
HAMARA DIL AAPKE PAAS HAI SNAPSHOT