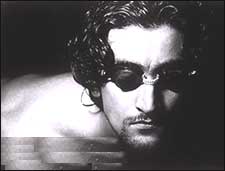 Rohit Murari / fullhyd.com
EDITOR RATING
1.0
Performances
Script
Music/Soundtrack
Visuals
NA
NA
NA
NA
Suggestions
Can watch again
NA
Good for kids
NA
Good for dates
NA
Wait to rent it
NA
Whoever said Bollywood only makes the same insipid films with the same insipid storylines? In this case, though, a large population would have preferred the tried and tested path. But, I digress. So, where do we begin? We have three sisters who live together. And for those of you who are thinking that the movie will be on the lines of 'Girls Hostel', hold that thought right there. There is going to be a twist in the tale at the very beginning.

The eldest of the sisters, Anjana, works as the secretary of Ravi. One fine day in office, she starts acting weird: she types 'I Love You' on official letters, and stands with her skirt raised high above her knees - several viewers did not seem to have any objection to the second part, but Ravi thinks she needs a change, and takes her out on vacation. Here it should be pointed out that the film does not unfold on the lines of 'Chamiya 2000', though the gentleman next to me seemed despondent it did not.

During their holiday, it is discovered that some supernatural force has possessed Anjana - there we go again. In comes Inspector Singh and he starts investigating. When not much comes out of it, a certain Prof. Bhatnagar comes into the picture. He is a psychologist, and comes to the conclusion that the spirit has to be that of a former lover of Anjana's called Aman.

To exorcise the spirit, a pandit (Kiran Kumar - the one face that is familiar) performs some havan and frees her. Anajana and Ravi get engaged, and the film comes to an end.

About the other actors, it is understandable. But, what compelled Kiran Kumar to take up the film? Is this what happens to good actors when film offers stop coming in? The songs are as good or as bad as you may expect of films of this genre. What takes the cake, though, is the attempted humour. The sheer alacrity with which it fails is quite astonishing. Even we make better efforts than those.

Just a cautionary word. Do not think the film is meant for your family - like the sole family in the theater thought.
Share. Save. Connect.
Tweet
SPARSH SNAPSHOT

ADVERTISEMENT
This page was tagged for
sparsh movie review
Sparsh hindi movie
Sparsh reviews
release date
Sushil Jhangria, Kunal Kapoor
Follow @fullhyderabad
Follow fullhyd.com on
About Hyderabad
The Hyderabad Community
Improve fullhyd.com
More
Our Other Local Guides
Our other sites
© Copyright 1999-2009 LRR Technologies (Hyderabad), Pvt Ltd. All rights reserved. fullhyd, fullhyderabad, Welcome To The Neighbourhood are trademarks of LRR Technologies (Hyderabad) Pvt Ltd. The textual, graphic, audio and audiovisual material in this site is protected by copyright law. You may not copy, distribute, or use this material except as necessary for your personal, non-commercial use. Any trademarks are the properties of their respective owners. More on Hyderabad, India. Jobs in Hyderabad.