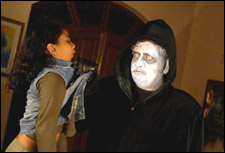 EDITOR RATING
3.0
Performances
Script
Music/Soundtrack
Visuals
6.0
2.0
4.0
6.0
Suggestions
Can watch again
No
Good for kids
No
Good for dates
No
Wait to rent it
Yes
For a true horror film aficionado, the difference between watching an innovative horror film and a cliched horror film is the same as that between eating a new dish he's loving and a standard dish he always loves. Aa Intlo is made precisely for that kind of viewer - it has lesser thought than goes into realizing it's crap, but if it's the thrills you are looking for, it delivers them, even if they're not even in a change of clothing.

The rest of the movie is no better - every clichÃ© is there. Hands springing out of bath tubs, an eerie-looking watchman and maid, a lunatic sadhu, and heaps of red herrings and unexplained scenes (like the kid squeezing the throat of his younger sister). Everything feels like you've seen it somewhere - mostly Bhoot, Darling and Phoonk - and the climax is a straight lift from the contemporary horror classic 1920. And if you are trying to sit and put everything together in the end, you need imagination, luck, and a life.

So Pavan (Chinna) is living with his wife Pallavi (Mayuri) and 2 kids in a house he's newly shifted into, when some unnatural things start happening. The tulasi plant keeps dying, his wife gets spooked by a tempestuous sadhu blowing his conch, and a priest is found dead in their courtyard, and more. His wife is also constantly yearning for sex and he's keeping her away, and she's getting wild at this uncharacteristic refusal.

Pavan does not believe in God or ghosts, and when his friend (Vinod Kumar) suggests that they see an astrologer, he complies very reluctantly. And it does nothing for his faith in astrologers when the man (Kota Srinivasa Rao) makes a stunning observation after seeing Pallavi's horoscope - that she's been dead a long while. He's wild, but the astologer is adamant.

With a script completely lacking in integrity, Aa Intlo is more a compilation of thrills than a coherent narration of a story. Rubbing salt into your wounds is a completely out-of-shape Chinna choosing to play protoganist himself - a character who has damsels falling crazily in love with him. Plus, there's a duet, too, featuring a lip-lock between him and Mayuri. Chinna was never the most expressive or energetic of actors, and it does nothing for a poorly conceptualized film that he is its face.

Mayuri is okay, but her acting is overshadowed by the sad writing. In fact, the fact that an accomplished actor like Kota is made to look bad - the way he laughs meaninglessly for a long while before pronouncing that Pallavi died long back comes to mind - speaks volumes of the writing (the story, screenplay, dialogue credits go to Chinna).

Luckily the film has just about 2-3 songs, and even more luckily they don't do any lasting damage. The visuals are fairly okay, though it's certainly no 1920 or Arundhati. On the whole, like we said, this one is good for an evening of thrills, as long as you are okay with not showing much class.
Share. Save. Connect.
Tweet
AA INTLO SNAPSHOT

See Aa Intlo full details
AA INTLO USER REVIEWS
1 - 4 OF 4 COMMENTS
POSITIVE  |  NEGATIVE |  NEWEST  |  OLDEST  |  MOST HELPFUL  |  LEAST HELPFUL
USER RATING
10
1 USER
Performances
Script
Music/Soundtrack
Visuals
10.0
10.0
10.0
10.0
Can watch again - Yes
Good for kids - Yes
Good for dates - Yes
Wait to rent it - Yes
goat on 30th Dec 2016, 6:59pm | Permalink
i am kicking my ass like why i cant give a rating of 200
goat on 30th Dec 2016, 6:52pm | Permalink
china is a dog
raj gopal on 18th Jul 2009, 10:31am | Permalink
the movie starts off good with some twists and turns and an intersting point at the interval...the second half is also good but could have been made better,,,there is no proper ending to some characters,,,the screenplay could have been made better,,,,on the whole chinna should be appreciated for selecting this kind of subject for his directional debut,,,and he succeded to some extent,,,,,this movie is worth watching once,,,
Suraj Reddy on 17th Jul 2009, 10:53am | Permalink
Its an amazingly taken movie..Story is very good..am sure it will be a good entertainer..i liked it personally and will advise everyone to watch it...

ADVERTISEMENT
This page was tagged for
aa intlo movie plot
ah intlo
aa intlo wiki story
Www telugu movie aa intlo wikipaid com
ah intlo movie plot
Follow @fullhyderabad
Follow fullhyd.com on
About Hyderabad
The Hyderabad Community
Improve fullhyd.com
More
Our Other Local Guides
Our other sites
© Copyright 1999-2009 LRR Technologies (Hyderabad), Pvt Ltd. All rights reserved. fullhyd, fullhyderabad, Welcome To The Neighbourhood are trademarks of LRR Technologies (Hyderabad) Pvt Ltd. The textual, graphic, audio and audiovisual material in this site is protected by copyright law. You may not copy, distribute, or use this material except as necessary for your personal, non-commercial use. Any trademarks are the properties of their respective owners. More on Hyderabad, India. Jobs in Hyderabad.