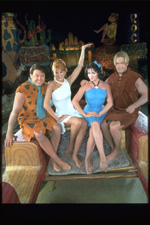 Pratima Agnihotri / fullhyd.com
EDITOR RATING
7.0
Performances
Script
Music/Soundtrack
Visuals
NA
NA
NA
NA
Suggestions
Can watch again
NA
Good for kids
NA
Good for dates
NA
Wait for OTT
NA
A child is hidden in most of us and this prankster, always up to tricks, can make or mar our futures. That is the message of this cutie of a film, based on the animated series by Hanna-Barbara Productions.

This mega-sized cartoon strip tells the story of a princess. She is stiff bored in the company of the money-minded fiancé she has been affianced to by her scheming mama. During her version of the Roman holiday, a simple savage of a Flintstone wins her heart. The Hardy of this Laurel becomes the beau of her bosom friend. When they return to the kingdom with boyfriends in tow, the wicked mama and the handsome fiancé, who is mired in debt traps, have to plan ruses and counter-ruses to extricate the princess away from her new found lover. A visit to Rock Vegas is one such smart trick that the wicked fiancé uses to make lover boy appear small.

The film is indeed a fairy tale because of the overarching story of the supermen who want to find out what it is that makes a human relationship special. The banished superman is vindicated in his romanticization of l'amour. No wonder, he acts the helpmeet and cupid to the bumbling hero in hot pursuit of the princess, whom he almost loses to his childish craving for the Rock Vegasian sensations.

A sweet enough story, it appears attractive because of Robert Turturice's costume design and realistic set designs which enliven the Rousseauesque savage world, as well as the wicked Rock Vegas (a clear mimicry of Las Vegas) where the lover boy makes himself appear a childish fool. The music and dances in the tradition of the thirties' cabaret-n-song musicals make the film a relic of the twentieth century. The echoes of very many fairy tales add to the traditional effect, glorifying the worth of love beyond any cost.

Don't think though that the fun film with adequate enough performances is mere sentimental slush. It is laced with a solid tongue-in-check effect for those sensitive enough to perceive it. The childish savagery of the hero, moreover, forms the travails of the typical American lost to European complexity.

Such a Henry Jamesian critique and an unmistakable self-analysis of filmmaking add to the filmy drama, an intellectual effect. So, this film, worth a watch on a lazy afternoon, will provide you with the kicks you deserve!
Share. Save. Connect.
Tweet
THE FLINTSTONES IN VIVA... SNAPSHOT
THE FLINTSTONES IN VIVA ROCK VEGAS SNAPSHOT

ADVERTISEMENT
This page was tagged for
The Flintstones In Viva Rock Vegas english movie
The Flintstones In Viva Rock Vegas reviews
release date
Mark Addy, Stephen Baldwin
theatres list
Follow @fullhyderabad
Follow fullhyd.com on
About Hyderabad
The Hyderabad Community
Improve fullhyd.com
More
Our Other Local Guides
Our other sites
© Copyright 1999-2009 LRR Technologies (Hyderabad), Pvt Ltd. All rights reserved. fullhyd, fullhyderabad, Welcome To The Neighbourhood are trademarks of LRR Technologies (Hyderabad) Pvt Ltd. The textual, graphic, audio and audiovisual material in this site is protected by copyright law. You may not copy, distribute, or use this material except as necessary for your personal, non-commercial use. Any trademarks are the properties of their respective owners. More on Hyderabad, India. Jobs in Hyderabad.