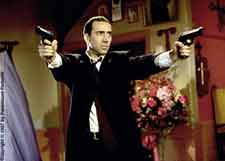 
John Woo is known for his extremely stylish movies. And this one is no exception. The only thing that keeps this movie from being dismissed as just another stylish movie is the inclusion of two names in the otherwise unimpressive cast.... John Travolta and Nicholas Cage. These two, with their tremendous screen presence and acting, take the movie to a plane far above that of regular action movies.
They and only they are enough to convince you to rush to the theater to see the movie.

The stage is set in your modern day American city with the age-old war between cops and robbers going on in full swing. The cop in question is Sean Archer, and his nemesis is the evil gangster Castor Troy. These two battle it out with a vengeance at the cost of many other innocent lives. The history behind this enmity: Troy had tried to kill Archer, but ended up killing his son... an accident of course, but not that Troy regrets it in any way. Now Archer has made it the sole purpose of his life to hunt down Troy, in the process neglecting his wife and teenage daughter. Now comes the twist to the story.

Troy is captured in a shootout, but goes into a coma. Now, he has hidden a cache of nuclear weapons somewhere in the city which is primed to go off in a couple of days. They have to be found and taken out, or the city would go - as Castor would say - BOOM! Now Archer uses a new scientific procedure to replace his face with that of Troy's... presto, Nicholas Cage is Sean Archer, who now goes undercover as Troy. Now Cage is put in a max security prison to get the info out of Troy's brother.

But things don't always go smooth. The real Troy gets up from his sleep and finds that he no longer has a face. So he takes the help of his gangster friends and takes the only one available... that of Archer. Now the game of cat and mouse is reversed with the cop taking the guise of the robber and vice versa. Here you have a memorable scene where Archer (actually Troy) comes to meet Troy (actually Archer) in prison. And hereon, the real Troy is intent on messing up the real Archer's life.

Now the real Archer breaks out of prison to find out all the people who knew about the face-off procedure have been killed by the real Troy. He starts a war, which will either see him or his enemy dead. No prizes for guessing who wins.

The story is very far-fetched, and the action is typical Woo - fast and flashy. But clash of the titans, Travolta and Cage, elevates the movie beyond the popcorn genre. Definitely worth a see, at least to compare the different ways in which Travolta and Cage play either of the characters.
Share. Save. Connect.
Tweet
FACE OFF SNAPSHOT

ADVERTISEMENT
This page was tagged for
Face Off english movie
Face Off reviews
release date
John Travolta, Nicholas Cage
theatres list
Follow @fullhyderabad
Follow fullhyd.com on
About Hyderabad
The Hyderabad Community
Improve fullhyd.com
More
Our Other Local Guides
Our other sites
© Copyright 1999-2009 LRR Technologies (Hyderabad), Pvt Ltd. All rights reserved. fullhyd, fullhyderabad, Welcome To The Neighbourhood are trademarks of LRR Technologies (Hyderabad) Pvt Ltd. The textual, graphic, audio and audiovisual material in this site is protected by copyright law. You may not copy, distribute, or use this material except as necessary for your personal, non-commercial use. Any trademarks are the properties of their respective owners. More on Hyderabad, India. Jobs in Hyderabad.