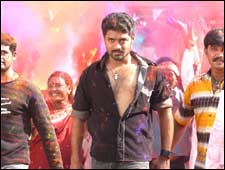 Priyanka Pulla / fullhyd.com
EDITOR RATING
1.0
Performances
Script
Music/Soundtrack
Visuals
NA
NA
NA
NA
Suggestions
Can watch again
NA
Good for kids
NA
Good for dates
NA
Wait to rent it
NA
If you are watching the first day's first show of Kalyan Ram's latest, you are lucky. There is more entertainment happening off-screen than there is on. When your mind reaches a state of buzzing anaesthesia after 20 minutes of flashes of computer-aided violence, you begin to notice how the whole of last month's newspapers are floating in the air in ticket-sized shreds, thrown up by roisterous fans.

Only, that's about it. If we took the cudgel and walloped the metaphorical bush right in the middle, we would have to say that Asaadhyudu is a big bunch of tripe. That the one star in the rating is sheerly for the laudable act of the movie having ended sometime.

Like a Kathakali performance, Asaadhyudu is packed with exaggerated displays of emotions. And between those masks of theatrically curved eyebrows, booming voices and snarling lips, there are a few copious litres of sheer applesauce. Hogwash. Crap. But that is if we DIDN'T beat around the bush.

If we did, we would sincerely attempt to tell you the story. Parthu (Kalyan Ram) is a Vizag lad who oscillates between vacations at Hyderabad and ill-fated stints at every one of the colleges in his hometown. While not being the brightest crayon in the box when it comes to studies, he is a state boxing champion who enjoys giving a solid pasting to all law-breakers who cross his path.

Prakash (Ravi Kaale) and his younger brother Thambu are reigning villians in the city of Hyderabad. They shoot, hack, chop, stab, slice and whack with iron rods, every little innocent thing that moves around the accursed town. Girls walking down the road are chased down and raped, men walking by are pushed over and belabored, entire communities of people are bullied with tiffin-box sized bombs.

And so, all is jolly and peaceful until Parthu runs into Thambu's group one fine day and thulps him to death.

Now there are a whole bunch of dudes in the middle - one Varadaraju Reddy (Jeeva), Madhuri (Diya), Raghunath (Ahuti Prasad) and Parthu's dad (Chalapathi Rao) - but all of them don't really matter. Madhuri plays Parthu's love interest, working hard on winning his affection by wearing the tiniest, tackiest clothes and breaking into a slithering jig everytime he affirms his love.

There is an ACP who, like Romeo claiming his love to Juliet, keeps pledging his support to Parthu and doing precious little about it. There is Madhuri's almost incestuously doting dad, who plays the impotent mafia don who has found new life through his son-in-law.

Kalyan Ram, while looking good enough to ignite fan-passions, lisps his way through his dialogues like a school-kid trying to play a supersize role. He shouts out threats in such constant succession, your throat is hoarse just hearing him. Not to mention his enemies who threaten him back. There are so many chopped limbs and punctured body parts, this movie could belong to a special new genre called 'trauma'.

The worst of it all is the ploy the director uses to increase the running time. Songs. Songs stuffed with quivering flesh, quaking hips and chintzy clothes. Diya, with her elf-like features and body, looks and acts more like an extra. Her part is like that of a fur-stole on Kalyan Ram. A priestess of the temple of Parthu, a lifeless decoration.

Songs have the Amalapuram beat - lots of drums, the kind you hear at festival processions. Most of the rest of the cast is mediocre and nudges the movie inch by painful inch to its climax. Which has a brilliantly outraged Parthu massacring the villian in an utterly gory finale.

It is hard to figure out what need or instinct Asaadhyudu tries to tap in the viewer. Fear of some anonymous gargoyle that lurks behind every street corner of Hyderabad, waiting to pounce on you and rip you apart? Admiration of a superman who avenges all one's slights and insults? Lust for a shimmering and swaying belly button? Bah! We give up! The movie quite simply s***s big-time. Avoid it like the plague.
Share. Save. Connect.
Tweet
ASAADHYUDU SNAPSHOT

This guy is another flash in the pan, a fluke!!

I am absoltely in love with your reviews... Finally someone who doesn't just accept everything that comes your way.. It's sooooo much fun reading your reviews.. Way to go..

Is fullhyderabad.com exclusively for the connoisseurs or what?

And kindly, for heaven's sake, use Hyderabadi english, not that found hidden in the pages of oxford. Otherwise, fullhyderabad.com needs to portray an icon in its site, that of a dictionary!!!

RATING
8
Antar on 17th Feb 2006, 6:03pm | Permalink
Yeah u r rt...itz fun to read reviews here. Seems this asaadhyudu is impossible..:-))
RATING
10
Dm on 17th Feb 2006, 2:58pm | Permalink
since when does fullhyd bleep out 'sucks'?! if you carried that system with retrospective effect, the entire archive of movie reviews would register just one long uninteruppted bleep
RATING
2
Vakibs on 17th Feb 2006, 12:14pm | Permalink
The rating is for your review, Priyanka. I never watch any of these movies, but always read ur reviews. There's some stuff in your brain, that turns an agonyzing movie into a bone-trickling hilarious review. Though sometimes I pity you that you spend hundreds of pure miserable hours in the cinema.

ADVERTISEMENT
This page was tagged for
Asaadhyudu telugu movie
Asaadhyudu reviews
release date
Kalyan Ram, Diya
theatres list
Follow @fullhyderabad
Follow fullhyd.com on
About Hyderabad
The Hyderabad Community
Improve fullhyd.com
More
Our Other Local Guides
Our other sites
© Copyright 1999-2009 LRR Technologies (Hyderabad), Pvt Ltd. All rights reserved. fullhyd, fullhyderabad, Welcome To The Neighbourhood are trademarks of LRR Technologies (Hyderabad) Pvt Ltd. The textual, graphic, audio and audiovisual material in this site is protected by copyright law. You may not copy, distribute, or use this material except as necessary for your personal, non-commercial use. Any trademarks are the properties of their respective owners. More on Hyderabad, India. Jobs in Hyderabad.