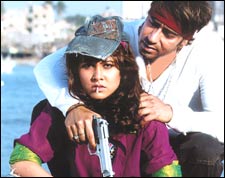 Samrat Sharma / fullhyd.com
EDITOR RATING
1.0
Performances
Script
Music/Soundtrack
Visuals
NA
NA
NA
NA
Suggestions
Can watch again
NA
Good for kids
NA
Good for dates
NA
Wait for OTT
NA
Before I get to the business of analyzing Ram Gopal Varma Ki Aag, let me state that this film is by far not the worst film you can or will see this year. This is also not as bad as the worst of movies that somehow escape our radar. There may be other films that are technically worse or more painful to sit through, but none of them bring their suckiness together in the way that Ram Gopal Varma has managed to do here.

There's something else that I must assure some of you: some might think that my opinion of this film is colored by a direct comparison to the original (Sholay, if you have been living in a cave). That much is untrue. First, they can't make an 'updated' version of a classic and not expect to be compared, and second, Ram Gopal Varma Ki Aag would have been detestable drivel even if Ramesh Sippy had never made a film in his life.

But while we are talking about Sippy's film, it is interesting to see how much Varma doesn't understand about the original. While Sippy wanted to make an entertaining Western, with top action and writing talents to make it a pack a punch, Varma is content with a mood piece and caricatures prancing about his interesting camera angles. Sippy was never bigger than Sholay, while Ramu wants to own Aag.

Varma lets go of the 70mm largesse of Sholay, and opts for his favorite upclose gritty Mumbai underworld look and feel. I have to give him and his art director credit in that they've created an atmosphere in Babban's lair and his domain that is both repulsive and creepy. Unfortunately it's a cartoonish one, and falls flat under close inspection.

The narrative suffers from the same uneven handling, and so we have Inspector Narsimha (Mohanlal as Thakur) out for revenge against Babban (Amitabh Bachchan as Gabbar), recruiting two street thugs Heero (Ajay Devgan as Veeru) and Raj (Prashant Raj as Jai), in a narrative structure which confuses and alarms us at regular intervals. You have to see Devgan in a red bushy moustache and Mohanlal in army tights trying to be 'undercover' to believe that alarming is truly what I'd describe it as.

The writing is so terrible, in fact, that at best, the film's dialog has clever sounding re-interpretations of Sholay's crackerjack stuff, and at worst it is bland and unremarkable to the extent that you don't care what the characters are mouthing at all. Of course there are 'updates' to the way scenes are written or presented in the narrative thread, but nary a hint of originality in any of it. Everything here is sendback to the original film. However, literal-mindedness rules here. The verve behind the immortal scenes and dialog is waylaid in favor of lines that come off as gimmicky.

Time we talked about Gabbar, don't you think?

There's a scene in the film where Babban cuts off Narsimha's (no, not hands) fingers. The build up to the actual event is note perfect and Bachchan gives a fantastic performance for that scene alone. It's a visceral scene, and it's scary because we're not seeing some angry outburst, but rather a maniac take a very calculated step from messed up old man to cold-hearted torturer. At this point I began to think that maybe Ramu's new take on the classic could have something to add.

But he wasn't going to let me have that satisfaction, and in the second half the film plunges into an over-the-top, hammy Babban, who with his army fatigues, Al Qaeda references and all, remains just a cartoon friggin' character. Up to this point the film has been annoying and disinteresting; from here on it's actively boring. Since that's the entire second half of the film, it's hard not to walk away feeling disappointed about the return of Gabbar Singh. Gone is the mystique and wonder, and in its place is utter distaste of the pretenders.

There's a lot more to complain - the continuity is horrific, the film is without suspense or tension, and the background score is so loud I have a slight hum in my ears still. Characters are introduced who will only have interest for people who remember those characters from Sholay, but while then they had actual personalities, here they just hang around waiting for their turn to get killed. The worst part is, you don't care anymore.

Not helping matters is the cast. Newcomer Prashant is confident though a little bland, and Sushmita bravely does whatever she can to give depth to her flat character. Mohanlal has terrible Hindi but solid acting chops, and hey, that's a good thing. And while Amitabh is the one who tries the hardest to make it work, he is let down by the writing, and Varma's overindulgence. Devgan and Kothari are the biggest criminals, as they chew up most of the screen space, and deliver the worst performances you will see this year.

This so-called 'update' of Sholay mistakes violence for thrills and weird camera angles (including one that is stuck to Kothari's bottom) for character development. It's the kind of film that makes you want to visit Ramu in the editing room and find out just what he was thinking when he saw this ridiculous footage.

Speaking objectively without thinking of Sholay, Ram Gopal Varma Ki Aag is a terrible film. As a remake of the classic, it's a crime against humanity. Ultimately, some classics don't need to be remade because there is no room for improvement. Ram Gopal Varma Ki Aag proves it for all intent and purposes. I can't imagine sitting through this garbled, poorly thought-out mess ever again. I can only urge you not to make the same mistake as me and to stay away from Aag at all costs. Rent Sholay and watch it again, instead.
Share. Save. Connect.
Tweet
AAG SNAPSHOT

See Aag full details
AAG USER REVIEWS
1 - 3 OF 3 COMMENTS
POSITIVE  |  NEGATIVE |  NEWEST  |  OLDEST  |  MOST HELPFUL  |  LEAST HELPFUL
USER RATING
3.6
40 USERS
Performances
Script
Music/Soundtrack
Visuals
NA
NA
NA
NA
Can watch again - NA
Good for kids - NA
Good for dates - NA
Wait for OTT - NA
Anand Raj on 4th Sep 2007, 5:45pm | Permalink
haven't seen the movie...but going by your review, I think the movie must be pretty bad...but we must remember that the original 'SHOLAY' per se is not as great a movie as we all make it out to be...the original Sholay too was Ramesh Sippy's amateurish attempt to indianize a Hollywood western with a bit of melodrama, gawdy action and showy one-liners thrown in
RATING
2
Rohit Kumar on 3rd Sep 2007, 1:39pm | Permalink
I wish there was an option of "No star" in the drop-down menu of "Your Rating" for this movie. I feel violated and contaminated despite the fact that I walked out of the movie after Urmila's item number immediately after the intermission. Fullhyd, you might want to add another column to the rating legend saying "AAAAAARGH!!".
RATING
2
Pratap Reddy on 1st Sep 2007, 11:25am | Permalink
Ramu looks to have become a drunk ass these days with his bulging out of their sockets... Driven by the success of Rangeela & Company he looks to have become a bit crazy these days. With such a kind of his state... the outcome of his movies is predictable. Definitely the trailers Of "Ramu ki (where?) Aag" suggested something worst than James from the Factory.

ADVERTISEMENT
This page was tagged for
Aag hindi movie
Aag reviews
release date
Amitabh Bachchan, Mohanlal
theatres list
Follow @fullhyderabad
Follow fullhyd.com on
About Hyderabad
The Hyderabad Community
Improve fullhyd.com
More
Our Other Local Guides
Our other sites
© Copyright 1999-2009 LRR Technologies (Hyderabad), Pvt Ltd. All rights reserved. fullhyd, fullhyderabad, Welcome To The Neighbourhood are trademarks of LRR Technologies (Hyderabad) Pvt Ltd. The textual, graphic, audio and audiovisual material in this site is protected by copyright law. You may not copy, distribute, or use this material except as necessary for your personal, non-commercial use. Any trademarks are the properties of their respective owners. More on Hyderabad, India. Jobs in Hyderabad.