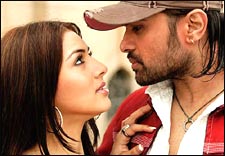 Also, why does HR always don a cap? (No, his hair is NOT thinning.)

Reshammiya's, er, Moviee, addresses these thoroughly thought-provoking questions. In this respect, we are to assume that this flick is, to borrow a word from Reshammiya's contemporary Anu Malik's dictionary, "inspired" by Reshammiya's life. (Gently overlook the disclaimer "This films bears no resemblance to any person living or dead, blah, blah" at the onset. You are clearly meant to.)

In other respects, like that cutting-edge cellphone - and we refrain from plugging the company by publishing its name here - flooding the Indian market, Aap Kaa Surroor is "not one thing, it's many".

It is a, er, "Real Luv Story", thriller, musical, and, most importantly, the vehicle that will sky-rocket the already tremendously popular Reshammiya to the dizzying heights of éclat yet again, albeit this time as an actor. Or so the team driving Aap Kaa Surroor - debutant director Prashant Chadha, Reshammiya himself and distributors who want to milk cash cow Reshammiya (there's a phrase I never thought I'd visualize...) for all his worth - is clearly hoping.

So does Aap Kaa Surroor succeed? Yes. Largely though, no.

Before debriefing it, let me brief you (no pun intended) on the premise of Aap Kaa Surroor. HR (Reshammiya, unsmiling and clothed in his signature garb, playing Reshammiya to a T), the "most successful Indian rock star", is performing in Germany as part of his world tour. There he meets his event manager Riaa (Hanssikaa Motwani of Desamuduru, debuting in Hindi as leading lady), and the duo promptly fall in Luv.

About 16 cap switches and many renditions of the Gayatri Mantra (one strummed on the guitar, no less) later, they decide to take their relationship to the next level - Riaa takes HR to meet Daddykins (Sachin Khedekar). Daddy disapproves. The fact that HR, within days of this meeting, gets arrested for the murder of one Nadia, a television journalist who performed a revealing sting operation on him minutes before being killed, gives him further reason to remain unsmiling.

Things take a turn for the worse when he learns in jail that Riaa is to be married off soon. The bearer of this bad news is Ruby James (a man-eating Mallika Sherawat), HR's "number one fan and Germany's number one lawyer", who will stop at nothing to seduce him. Circumstances allow HR to escape from prison, but within 24 hours he must prove his innocence to Riaa's father and the world, failing which she will be wed to a groom of Daddykins' choice...

This wafer-thin plot is held together by precious little, if at all; those who love Reshammiya's brand of music and choreography will get their money's worth, though if music is the sole reason one is prompted to buy a ticket then I would recommend purchasing the soundtrack over viewing the flick.

The crowning glory of the music album, by the by, the remixed version of Mehbooba Mehbooba, is tagged as a video after the conclusion; it is not a part of the actual flick. (And speaking of things in Aap Kaa Surroor that have no place there, by devoting an absurd, momentum-jarring sequence involving Mumbai auto rickshaw-wallahs making a special appearance in Germany, the makers of this flick have only underlined how clichéd their product really is.)

The look of Aap Kaa Surroor is also just about satisfactory - Germany is scenic and hence pleasing to the eye. But in all other departments, this flick disappoints. As a thriller, the murder mystery plays out quite predictably; and the villain comes to light long before the actual climax arrives, a serious error in plot development. As a 'Luv Story', Aap Kaa Surroor is best described as banal. The chemistry between the leads is, well, conspicuous in its absence.

Reshammiya and Motwani have a long way to go as actors. To put it kindly, Reshammiya is stoic throughout (except in one scene where he's drunk and pulls off a Mithunda-style dance rather well). Motwani needs a little less pancake and a lot more expression - she is either smiling rather insipidly and batting her eyelashes at the world at large, or tearing up.

As far as the rest of the cast is concerned, Sherawat has had better screen time; she has played meatier parts and looked hotter, too. Raj Babbar, as Nadia's father, is wasted, literally and otherwise. Khedekar has what are comparatively the most sensible dialogues in Aap Kaa Surroor, but his popping eyeballs are plain scary. Similarly disturbing is the very noticeable baby pink lipstick coating his lips in every shot...

To wrap up this mammoth review, watch "Aap Kaa Surroor - The Moviee - The Real Luv Story" if you really, really must, or if you are a HUGE Reshammiya fan and MUST be loyal. Else save your rupees for a rainy day - another one, that is.
Share. Save. Connect.
Tweet
AAP KAA SURROOR SNAPSHOT

ADVERTISEMENT
This page was tagged for
Aap Kaa Surroor hindi movie
Aap Kaa Surroor reviews
release date
Himesh Reshammiya, Hanssikaa Motwani
theatres list
Follow @fullhyderabad
Follow fullhyd.com on
About Hyderabad
The Hyderabad Community
Improve fullhyd.com
More
Our Other Local Guides
Our other sites
© Copyright 1999-2009 LRR Technologies (Hyderabad), Pvt Ltd. All rights reserved. fullhyd, fullhyderabad, Welcome To The Neighbourhood are trademarks of LRR Technologies (Hyderabad) Pvt Ltd. The textual, graphic, audio and audiovisual material in this site is protected by copyright law. You may not copy, distribute, or use this material except as necessary for your personal, non-commercial use. Any trademarks are the properties of their respective owners. More on Hyderabad, India. Jobs in Hyderabad.