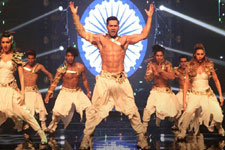 Nupur Barua / fullhyd.com
EDITOR RATING
5.0
Performances
Script
Music/Soundtrack
Visuals
6.0
5.0
6.0
7.0
Suggestions
Can watch again
No
Good for kids
No
Good for dates
Yes
Wait to rent it
No
So Mumbai Stunners is a dance troupe from the suburbs of Mumbai, and the members have very high hopes of making it big in dance circles. It may not be a very original dream, but these guys are sincere and hardworking. Imagine their shock and helplessness when, in a reality show, they are accused of plagiarising the dance steps of a South East Asian dance group. These young people are forever marred and their careers are over, now that they have been stamped as "cheaters".

Suresh a.k.a. Suru (Varun Dhawan) and Vinnie (Shraddha Kapoor) are the leaders of Mumbai Stunners. Refusing to be intimidated by the malice that now follows the slowly disintegrating group, Suru decides to recover their lost pride by participating in an international competition, to be held at Las Vegas (where else?). First, the group has to qualify in a competition held in Bangalore.

And who should waltz (literally) into their lives, very conveniently, but the supremely talented and enigmatic dance maestro, Vishnu Sir (Prabhu Deva)? He is the Mohammad Ali of dance (flits like a butterfly and stings like a bee), and the only man who makes Madhuri Dixit's moves seem lame (refer to that item number in Pukar). It follows, as night the day, that his rigorous training will send the Mumbai Stunners to Las Vegas after all. And this is when the fun begins.

You see, Vishnu has a hidden agenda. Suddenly, it is not just about winning that Mumbai Stunners needs to worry. The hurdles come hurtling, one after the other, making the term "underdog" seem like an unattainable privilege. Remo D'Souza, who has written the story, does not seem to believe in narrating stories that entail plain bad luck and the resurrection of good fortune. Anything that can go wrong in the lives of the Mumbai Stunners, does. There is nothing left to the imagination. In other words, "annoying" is an understatement. And yes, there is also a mother thrown in, for a good measure of tragedy.

As with Step Up, the plot revolves around talented people who have had more than their share of bad luck, and the aim of the script is to remind us that there is always hope. Only, ABCD 2 takes a rather long route to get there, with very little intrigue in the first half and an escalation of woes in the second. Again, like with Step Up, the sequels to the original may just coalesce into each other, making it difficult to differentiate one from the other (it is possible that ABCD 2 will be followed by another movie). Everything boils down to how well the protagonists can dance, in the end, and how the rest of the world conspires to keep them from their ultimate aim.

Then there is the dance bit. And this is where the actors/dancers matter, really, because this is a movie about a whole lot of dancing. Lauren Gottlieb is fantastic. She beats all the other women on screen hollow. Her presence only highlights the rather amateur attempts that Shraddha Kapoor makes. Dharmesh Yelande is very good, too. Varun Dhawan tries really hard, and he makes a mark, almost. Prabhu Deva is a dream to watch, always, but you get the feeling that he is not quite as enthusiastic with his moves this time around. All of them are better dancers than actors, at least in this movie. Prabhu Deva's diction is mostly unclear, Varun Dhawan is quite monotonous irrespective of the emotion he has to bring to life, and Shraddha Kapoor's character is pretty flat.

Remo D'Souza has managed to incorporate some interesting choreography in the movie, and the dance sequences are worth watching. The cinematography, enhanced by some great locations and innovative steps, is pretty good. Everything is in gerenal glossier than in the first film (which, though, seemed more realistic, in retrospect). The songs are not very catchy, but the music that accompanies all the gyrating and hip-hopping is done well. To dedicate about 155 minutes to a story that does not have much to say is tedious, to say the least, and maybe a crisper edit would have helped.

If you are a dance enthusiast, then ABCD 2 is a movie you may enjoy. It does not matter whether you watch the 3D or the 2D version (we'd suggest the latter, though). Just be prepared to watch a tamer version of Prabhu Deva, at least as far as dancing is concerned.
Share. Save. Connect.
Tweet
ABCD 2 SNAPSHOT 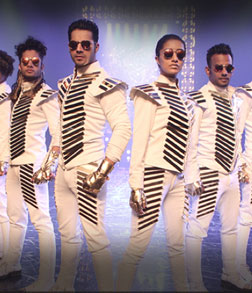 ADVERTISEMENT
This page was tagged for
www.com hind movi.comabcd 2hindi movie
ABCD 2 hindi movie
ABCD 2 reviews
release date
Varun Dhawan, Shraddha Kapoor
Follow @fullhyderabad
Follow fullhyd.com on
About Hyderabad
The Hyderabad Community
Improve fullhyd.com
More
Our Other Local Guides
Our other sites
© Copyright 1999-2009 LRR Technologies (Hyderabad), Pvt Ltd. All rights reserved. fullhyd, fullhyderabad, Welcome To The Neighbourhood are trademarks of LRR Technologies (Hyderabad) Pvt Ltd. The textual, graphic, audio and audiovisual material in this site is protected by copyright law. You may not copy, distribute, or use this material except as necessary for your personal, non-commercial use. Any trademarks are the properties of their respective owners. More on Hyderabad, India. Jobs in Hyderabad.