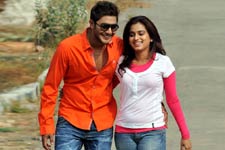 Romance, a film produced by Maruthi and directed by "Darling" Swamy, is yet another of those movies that claim to speak the language of the young and the "fast". It talks about girls who look for "shopping, recharge, dropping" and sex, and guys who look for ummm... sex. It talks about how difficult it is to find a virgin for a boyfriend/girlfriend. It talks about a universe where "perfect" and "fresh" are synonyms for "virginal". It talks about the scandalous world of girls' hostels, where an unsuspecting man can easily be stripped (hah!) of his "perfection" if he's not careful enough.

Okay, okay, not everyone in the audience cringed at all this. But that was only because they walked away.

Krishna (Prince) is on the lookout for a girlfriend who is chaste, pure, nice and all those things you find in Sooraj Barjatya movies. He lands one, Lalitha (Manasa), but, guided by his friends, all his wooing is centred around one thing - to find out whether she is, well, "pure".

Once he figures out that she suits his requirements, his next step is to judge her intentions based on how willing she is to make out with him. The idea is that if she's willing, she must not be a very nice girl. So when Lalitha does not resist his completely amorous and poorly disguised advances, he is, ironically, turned off. Then they break up.

Next, he hits on Anuradha (Dimple, the one who has adopted Tamannaah's mannerisms and expressions). Pretty quickly, he deduces that Anuradha has all the qualities he had dreamt of. But the spurned Lalitha returns, telling one and all that Krishna had slept with her.

Of course, true love prevails. In the end we have dialogues like "Nannu nenu test cheskovadaniki nenu ladies hostel ki ochanu". We find out meanwhile that party-pooper Lalitha had actually set her goonda brother onto Krishna because he had dumped her. But then, it is revealed that Lalitha is quite a swinger herself - she is caught sniggering with another guy about all her exploits.

Somewhere in the middle of all this is Venu acting as a "gay tester" - someone who can tell whether a guy is gay. And Krishna getting majorly turned on by the Titanic love-making scene.

The issue with Romance is not the kind of scenarios it portrays. Its problem is a lack of sense. Those gay-testing scenes and the ladies hostel sequences aren't tasteful, sure, but they are more stupid than distasteful. In one scene, a gang of girls try to find out whether Lalitha had slept with Krishna, by watching her walk (they don't succeed, of course)!

Some may call the movie perverted and disgusting, but let's remember that sex comedies can be funny, too. Romance doesn't get anything right - neither the sex (which it doesn't portray anyway) nor the comedy. The effort just looks amateurish, and is merely an attempt to cash in on audiences' new-found love for "realistic" teen cinema.

It is also tiring to see movies depict young men and women as people who court each other only for money and sex. It's not even offensive - it's just getting old.

Prince looks distractingly like Mahesh Babu. And yet, he doesn't look like the type who makes women auction the soap he uses to bathe (which they do in this film). He seems very tired, his acting lacks energy, and overall, he doesn't make a lot of impact.

Dimple, on the other hand, is full of spunk. She looks more mature than her on-screen hero, though. But she does shine through, evidently very comfortable with the camera. Noticeably, in some scenes, she has been made-up to look and pose like Tamannah.

Manasa too shows enthusiasm, but probably got a raw deal as far as the make-up was concerned - Dimple has the more glamourous role.

The comedians in Romance try some humour, and some of it works. Most of the comedy revolves around double-meaning dialogues.

The movie has been clearly smartly made on a low budget. With the film having been shot in an engineering college (whose management will doubtless regret letting out their premises for this crew), the road leading to it, and a hostel, the producers must not have spent a lot of money on its making. The music is passable.

Although it isn't the worst movie ever, we wouldn't recommend Romance. Watch it only if you have absolutely nothing to do.
Share. Save. Connect.
Tweet
ROMANCE SNAPSHOT 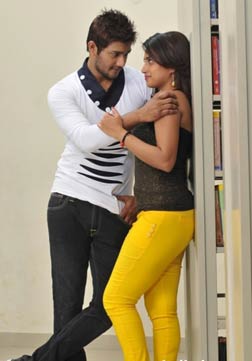 ADVERTISEMENT
This page was tagged for
telugu women romance hotel
Romance telugu movie
Romance reviews
release date
Prince, Manasa
Follow @fullhyderabad
Follow fullhyd.com on
About Hyderabad
The Hyderabad Community
Improve fullhyd.com
More
Our Other Local Guides
Our other sites
© Copyright 1999-2009 LRR Technologies (Hyderabad), Pvt Ltd. All rights reserved. fullhyd, fullhyderabad, Welcome To The Neighbourhood are trademarks of LRR Technologies (Hyderabad) Pvt Ltd. The textual, graphic, audio and audiovisual material in this site is protected by copyright law. You may not copy, distribute, or use this material except as necessary for your personal, non-commercial use. Any trademarks are the properties of their respective owners. More on Hyderabad, India. Jobs in Hyderabad.