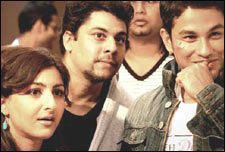 Jaiwantika Dutta-Dhupkar / fullhyd.com
EDITOR RATING
4.5
Performances
Script
Music/Soundtrack
Visuals
5.0
4.5
5.0
5.0
Suggestions
Can watch again
No
Good for kids
Yes
Good for dates
Yes
Wait for OTT
Yes
There are several reasons why good ideas don't translate into good films; and 99 being one of those films 'with a germ', just fails to make the list for reasons known and unknown. What could have been an absorbing account of friendship, love and money-making, turns out to be a disappointment that offers the spectator empty promises.

There are two reasons why the average Hyderabadi might want to forgive this film, though. One, it concerns itself with match-fixing nostalgia at the height of the IPL craze, and two, it can be credited to the two Hyderabadi guys who made the crossover film Flavors, and are now out loose making Bollywood films.

99 is about how its badly etched-out characters attempt personal transformation through crime and thus try to attain 'centuries' of achievement in life. And these metamorphoses happen against the backdrop of the eventful year of 1999, with Clinton's visit, the Y2K scare and, most importantly, the match-fixing controversy, among other things, marking it.

Sachin (Kunal Khemu, in great form) and Zaramud (Cyrus Broacha, in absentia) are two Mumbaiyya friends who've set their hearts on the aforesaid 'centuries', when a run-in with a baddie AGM (Mahesh Manjrekar, seemingly modelled after an '80s Southie superstar) finds them as his extortionists, and then flying to Delhi to recover money from a gambler Rahul (Boman Irani, truly deserves a break), in order to buy their own freedom.

What follow are a merry tirade of characters - Soha Ali Khan, Simone Singh, Vinod Khanna - a couple of sleights of hand and several wild-goose chases, before one final, fixed match decides it all.

To give credit where credit is due, 99 uses sufficient thrill and comedy to prevent itself from falling, "Kerplunk!" like that, onto the line that would cause the odd person in the audience to say it looks too much like a documentary. So, it doesn't look anything like a documentary, don't worry. The fact that it has an absolutely ludicrous script does contribute to it. The cinematography is good - in fact, if anything appeals, it is the visuals (and some of the songs). This movie also has some enjoyable 'moments', and they get their 2 minutes of fame in the audiences' minds as well.

As you leave the theatre after watching this film, you realise 99 suffers from a serious problem of definition. From a film that does not even comprehend just what goes into making a century, an omnipresent vagueness throughout is but expected.
Share. Save. Connect.
Tweet
99 SNAPSHOT

RATING
6
KiranAketi on 21st May 2009, 1:29pm | Permalink
This is a the kool summaer movie. Guy's if you like movies with simple things shown in a great way, then grab the ticket and enjoy yourself for a couple of hours.
Dev on 20th May 2009, 6:00am | Permalink
When a movie is made with right proportions of logic, creativity, performance and humor, with solid cinematography, editing and background music, you expect an interesting outcome: ‘99’ turns out to be an out of the ordinary movie, worth of every penny you spend on the ticket.

Basic plot is about two ordinary street smart friends ending up in a web of money extortion, illegal betting and dealing with criminal gangs, creating more and more problems to themselves. The characters they get involved with including a pretty girl (heroine?) that falls for the main lead actor (hero?) all end up in this riveting conclusion of the problem they gotten into. It is not fair to provide any more details of the story; otherwise I may ruin your experience. The first half of the story slowly takes you to that first hike in a roller coaster and the second half takes you through the non-stop twists, leaving you surprised how fast, exciting and entertaining the ride was.

I felt there were multiple climax scenes, each with its thrilling end as directors solve the puzzles one by one. Directors Raj and DK ensured that the stage is properly set and logic is never missed in this plot from 1999. The story is very much believable and combined with backdrop of some true incidents that rocked the cricket world in that year. It is a hard task to mix such true incidents with an imaginary tale, but directors succeeded in doing so. Very apt for the movie liner: Pure Fun, Part True, Part Fiction.

All the main characters gave wonderful performance. Boman Irani, Kunal Khemu and Mahesh Manjrekar deserve special reference. I expected more outright comedy scenes with Cyrus Broacha. Amit Mistry(Kuber) was hilarious, Soha was just perfect for her role and Vinod Khanna did his role with a lot of ease. Casting in total was very appropriate for the roles in the script.

If you are one of those people looking no-non-sense, no-BS and stimulating fun, that is 99. If you ever wished a bollywood movie no typical songs, no over-drama and interestingly natural, that is 99.

Ramesh on 19th May 2009, 1:52am | Permalink
t's rare that a movie comes around that does not depend on the gimmicks or masala that usually pervades bollywood movies. When it does, and is also packaged with intelligent comedy, spiffy dialogue and well-crafted story, it is a wonderful joyride of entertainment. '99' is a breath of fresh air for Indian cinema.

The creative opening credits and the ensuing hilarious chase, tell you this is not your usual fare. The story of small-timers who want to make it big in life, is led by Sachin (Kunal Khemu), Zaramud (Cyrus Broacha) and Rahul (Boman Irani) as the lead characters. A comedy of errors results in Sachin and Zaramud working for AGM (superbly enacted by Mahesh Manjrekar), who sends them to Delhi to collect money from a gambling-addicted Rahul (Boman). These three also have to deal with a small time crook Kuber (Amit Mistry - who steals the show). Sachin also meets his girl in Delhi (Soha Ali Khan). Attempts to fix their problems create even more and even bigger problems for the lead characters, which are portrayed in a comic but sensible manner.


The first half of the movie builds the characters and sets the story up slowly. The action speeds up in the second half and one by one each piece falls into place, even as the story goes thru surprising and comic twists and turns. Of particular note are the brilliantly filmed scenes closer to the end that include a nail-biting cricket match on which heavy bets are placed, a very funny and quirky encounter with AGM, and a chase thru Palika Bazaar. The cast performed very well - Kunal projected youthful energy and charm with a cool, stylish get-up, Cyrus brought down-to-earth-but-not-slapstick humor to the movie, Boman played the gambler-addict who loves his wife role brilliantly. Soha Ali Khan did a good job as the lady interest of Sachin. Mahesh Manjrekar as AGM delivers his straight-faced lone-liners with style. And Amit Mistry provides some of the funniest moments in the movie.

The background score is mute in a few scenes, but kicks in with energy at the right moments. The movie portrays authentically its timeline, 1999-2000.

The first half could have been sped up a bit, and the Kunal-Soha love story could have been fleshed out a little more, but this does not detract from enjoying the film. The songs are well placed and blend into the movie. The song and dance number in the end credits leaves one wanting more of it.

Directors Raj and DK have hit a century with their first Bollywood movie! '99' breaks old rules and makes a few of its own. A must watch for movie lovers.

ADVERTISEMENT
This page was tagged for
movie 99 hindi. in
99 hindi dubbed movie
99 movies hindi
99 movie hindi
movie 99 hindi
Follow @fullhyderabad
Follow fullhyd.com on
About Hyderabad
The Hyderabad Community
Improve fullhyd.com
More
Our Other Local Guides
Our other sites
© Copyright 1999-2009 LRR Technologies (Hyderabad), Pvt Ltd. All rights reserved. fullhyd, fullhyderabad, Welcome To The Neighbourhood are trademarks of LRR Technologies (Hyderabad) Pvt Ltd. The textual, graphic, audio and audiovisual material in this site is protected by copyright law. You may not copy, distribute, or use this material except as necessary for your personal, non-commercial use. Any trademarks are the properties of their respective owners. More on Hyderabad, India. Jobs in Hyderabad.