The Quiet Ones Review 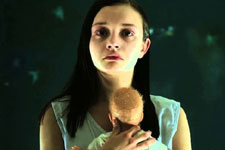 Nupur Barua / fullhyd.com
EDITOR RATING
4.0
Performances
Script
Music/Soundtrack
Visuals
5.0
4.0
5.0
6.0
Suggestions
Can watch again
No
Good for kids
No
Good for dates
Yes
Wait to rent it
No
There was a time when a horror movie guaranteed just a ghost or two, and could scare the living daylights out of you. Then came the Japanese horror remakes, and things got really freaky, but that was not enough. The Blair Witch Project introduced us the concept of a documentary-style film, to add credibility to the reality of the paranormal world (think Paranormal Activity and our own Ragini MMS).

Add to that the science of parapsychology, and you may not be able to sleep for a few nights after watching The Quiet Ones. Parapsychology has, in fact, been quite popular with Hollywood films, and now the British have joined the bandwagon. Strangely, these movies are eerier if they are set in a period a few decades ago - in this case, the 1970s, a decade usually associated with free love and great music.

It is 1974, and the Oxford University has a professor who is obsessively interested in parapsychology - enough to carry out his own experiment. Professor Joseph Coupland (Jared Harris) shows his students a film in which a young boy draws the face of a man that nobody has seen. Coupland insists that the boy's belief in the existence of this man is simply a manifestation of his negative energies. It is all in the mind, especially if the mind is not quite wired normally, and there is no such thing as the supernatural.

Coupland keeps in captivity a young girl named Jane Harper (Olivia Cooke), who has voluntarily submitted herself as the subject of his experiment. She was abandoned as a child and sent from one foster home to another, and she genuinely believes that Coupland can cure her of her possession. Coupland believes, on the other hand, that her mind is twisted, and finding a cure for her would rid the world of superstition and belief in the paranormal.

The professor recruits Brian (Sam Caflin) to record the experiment with a camera. Coupland has 2 more assistants, who help him with the research - Krissi (Erin Richards) and Harry (Rory Fleck-Byrne). When the research runs out of interested investors, the team moves to a deserted house in the countryside to continue with its experiment. And that is when Brian begins to believe that there is something not quite ethical about the whole thing.

In the meantime, Jane is the only one who is alerted to the presence of a young girl named Evey. As the environment becomes weirder, and as Brian begins to believe in demonic forces, the 3 assistants quit the project and go their separate ways. Brian goes back to civilisation and conducts his own research. His findings lead him to believe that both Jane and Coupland are in danger. He also discovers who the boy in Coupland's film was, and who Evey possibly is. He has to make it back to the cottage before it is too late.

The film begins with a claim that the story is based on true events. Actually, it is very loosely based on something known as the Philip Experiment that was carried out in Toronto in 1972. While the narrative is pretty contemporary, as is the language, the backdrop of Oxford immediately makes the story somewhat deliberately unnerving.

The intention of the filmmakers seems to be to make everything as convoluted as possible, making you question the story-telling skills of the writers. At the core is Jane Harper, and that itself marks the beginning of the end of an interesting narration. Throughout the movie, you will find yourself questioning the validity of the writing, especially the plot points. It is never quite explained how Coupland was allowed to keep a girl in a cell in the name of experimenting, for example. And with there being nothing here that you have not seen earlier, the fear factor is not so compelling. In fact, there is a particular pattern that makes the chills and thrills predictable, even though there are a couple that can make you jump.

In an effort to maintain the intrigue, the characters mouth some unintentionally funny dialogues. Speaking of intrigue, neither the plot points nor the incidents provide much, and the movie ends up looking more like a B-grade slasher film than a sophisticated work of horror. The experiment team goes from Oxford to a haunted house - how is this scenario in any way firing your imagination? As we mentioned, the scriptwriting seems lazy and convenient, and everything is set up only to fall foreseeably into place.

Jared Harris is too serious in his role as the Professor. He cannot seem to get over himself. At times, his arrogance at being the only true actor in the film is apparent. Sam Claflin and Olivia Cooke both try too hard, and end up hamming quite a bit. Erin Richards and Rory Fleck-Byrne provide some relief, but not because they are great actors, but more because the chemistry between them is better than that between the lead pair.

This is a period film, in every sense of the word, but the production designers very wisely do not overdo the setting. On the contrary, they underplay it. The equipment used in the research is believably assembled. The clothes are not too loud. While you are conscious of the fact that the movie is set in 1974, you are not too distracted by it.

The background score is unbearably loud at times, and gives you a jolt more than the idea that an unseen presence is becoming a threat to the characters. The switch between camera footage and "live action" gets confusing at times, although the aspect ratio changes when the movie goes into "footage mode". The visuals are unimpressive, and the dimly lit environments look too forced to be natural. The editing is slightly disjointed, and there is no set pattern to the cutting and placement of sequences.

The Quiet Ones is not the best horror movie you will ever see. In fact, it comes dangerously close to being one of the worst films ever made on parapsychology. The only novelty, if you will, is that it is set in the UK, and that makes you reminisce about the terrific movies of the horror genre that were so popular in the 1970s and 1980s. Watch at your own peril, then.
Share. Save. Connect.
Tweet
THE QUIET ONES SNAPSHOT 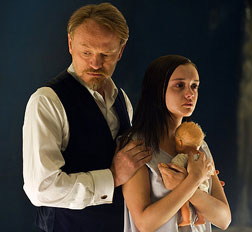 ADVERTISEMENT
This page was tagged for
The Quiet Ones english movie
The Quiet Ones reviews
release date
Jared Harris, Sam Claflin
theatres list
Follow @fullhyderabad
Follow fullhyd.com on
About Hyderabad
The Hyderabad Community
Improve fullhyd.com
More
Our Other Local Guides
Our other sites
© Copyright 1999-2009 LRR Technologies (Hyderabad), Pvt Ltd. All rights reserved. fullhyd, fullhyderabad, Welcome To The Neighbourhood are trademarks of LRR Technologies (Hyderabad) Pvt Ltd. The textual, graphic, audio and audiovisual material in this site is protected by copyright law. You may not copy, distribute, or use this material except as necessary for your personal, non-commercial use. Any trademarks are the properties of their respective owners. More on Hyderabad, India. Jobs in Hyderabad.