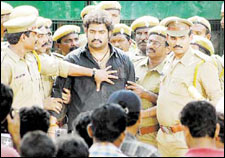 EDITOR RATING
7.0
Performances
Script
Music/Soundtrack
Visuals
NA
NA
NA
NA
Suggestions
Can watch again
NA
Good for kids
NA
Good for dates
NA
Wait for OTT
NA
A friend of ours once told us how his values were completely shaped by the movies. He never offers bribes, he never violates a traffic or government rule, he never lusts after married women (even actresses in movies who are now married), he never plays around with young girls' hearts, he pays every tax religiously, he never uses pirated software, and he never cheats anyone out of what he owes them.

It was, he said, because of a childhood spent watching Indian/Telugu movies with their principled heroes. He wanted to be like that.

He asked us why it didn't happen with everyone else who also all grew up watching the same movies. Most of the people he knows violate every rule of principled life. They pay Rs. 50 to a cop to avoid a fine of Rs. 200, they ogle at married women without a smidgen of compunction, they try their best to avoid taxes, they jump signals without a second thought, they lie to make money, they lie to escape penalty, they lie to get jobs, they lie to go abroad, and they download MMS clips shot stealthily or shot in circumstances where the girl never assumed it would become public.

Why did all those movies fail with them, he asked. Why did all our culture and all our religion fail with them? Aren't they at least scared everything comes back one day? Don't they see all the suffering around them?

We don't know - we at fullhyd.com have never been great thinkers. But yes, Rakhi touched us. It is not the greatest Telugu movie ever made. Oh, nowhere close. But to prove that we do learn from the movies, we are doing our small bit at the end of this review.

Ramakrishna (NTR) is an unemployed youngster who loves his sister Gayatri deeply. So much that he gives up his love Lakshmi (Ileana) when that becomes a necessity to get Gayatri married - he needs Rs. 10 lakhs for the dowry, and his aunt lends it on the condition that he marries her daughter Gowri (Charmme).

After the marriage, however, Gayatri is burnt alive by her husband and in-laws in a case of dowry harassment. And when the police and the courts are bought off, Rakhi (as Ramakrishna is called) turns avenger. He burns them all up.

However, he doesn't stop there. He becomes pyrophile extraordinaire. He goes underground, and starts burning up every man who perpetrates sexual crimes against women - from men who eve-tease and who cop a feel in buses, to men who rape, who abuse their wives and who harass for dowry. And he leaves a rakhi everywhere as his signature. The cops, led by Meenakshi Iyer (Suhasini), have no clue.

He comes on TV one day to reveal his identity (we told you this is not the greatest or most well-thought-out of movies), and becomes an instant celebrity. Woman all over the state idolize him as the brother they always wished they had. Crime against women drastically drops, they feel empowered and gain dramatically in confidence, and when the cops finally get to him, they have a whole state of irate women to contend with.

For people who feel that every man who even entertains the thought of taking dowry should be castrated, Rakhi will be fun to watch. That is, however, the problem, and perhaps the answer to our friend's quandary. Rakhi, like most movies, might end up preaching to the converted. Some things cannot be taught - they have to be learnt.

The first half of the film is boring - Krishna Vamsi cannot flesh out the brother-sister bond adequately. The adrenaline gets galvanized in the second half, when Rakhi starts his exploits with petrol. It's not like anything there is logical, but you are not looking for logic here. It's one of those dreams that you'll see fulfilled only on screen. God is never going to incarnate in your lifetime to clean up the filth. The rest is all mythology.

NTR is good in general, and excellent in some parts - especially some long reams of dialogue. There's quite a bit of melodrama and cliché in the film, and sometimes it gets inane, but the bigger problem are the songs. There's enormous titillation, with Ileana's and Charmme's midriffs occupying centerstage.

If you are trying to make a film with a message, there is no need for all this. The average man's capability to think clearly suffers dramatically when there's a curvaceous woman around. History proves that, your last 10 waking hours perhaps prove that. The male audiences may all be charged with fury at the inequity to women, thanks to the rousing scenes, but if you suddenly put Ileana on screen dressed in mini tops and spaghetti skirts (or maybe we got that mixed up - it was hard to say), it takes 5 seconds for most of them to wonder what sleeping with her would be like. Make that 3. Actually, 2. Okay, maybe that's being too harsh. Let's revert to 3.

Rakhi is a well-intentioned movie, and worth a watch for its second half. Movies dealing with the pervasive ills in society are generally more appealing than films with clear villians. For those willing, Rakhi can make a difference in how they think henceforth.

And to show we learn from the movies too, here's our bit for the women out there.

Perhaps the greatest scourge in contemporary times to women is people who misuse cellphone cameras - and the so-called MMS scandals. People who shoot unsuspecting women/couples stealthily, and guys who persuade or emotionally blackmail their trusting girlfriends to shoot what they claim will be a private clip, but which get onto the Net.

Here is a site we are told is most popular for hoarding such scandals: debonairblog.com. This guy solicits such illicit clips, gleefully posts every new illegal MMS he receives from his users, and promotes them aggressively, under a category "Scandals".

Let's each do our bit to get him to stop it. Take a minute to send him a mail to debonairblog AT gmail.com, asking him to stop. It's a sexually explicit site - try not to visit it.

Do take that minute out - here's some suggested text for you to copy-paste if you do not have the time.

"Dude, what you are doing is wrong. Some women in those MMS clips you post never knew those were getting shot, and the others never knew they were going to get public. They will be scarred for life, some will kill themselves. It could some day happen to someone you know. People who make money off women's bodies have the worst words describing them in every language. I don't want you to be called those. I want you to be a good man. Stop it right away, and I will pray that you be forgiven."
Share. Save. Connect.
Tweet
RAKHI SNAPSHOT

ADVERTISEMENT
This page was tagged for
rakhi review
rakhi ntr review
www telugu movei rulel com
rakhi telugu movie
rakhi movie review
Follow @fullhyderabad
Follow fullhyd.com on
About Hyderabad
The Hyderabad Community
Improve fullhyd.com
More
Our Other Local Guides
Our other sites
© Copyright 1999-2009 LRR Technologies (Hyderabad), Pvt Ltd. All rights reserved. fullhyd, fullhyderabad, Welcome To The Neighbourhood are trademarks of LRR Technologies (Hyderabad) Pvt Ltd. The textual, graphic, audio and audiovisual material in this site is protected by copyright law. You may not copy, distribute, or use this material except as necessary for your personal, non-commercial use. Any trademarks are the properties of their respective owners. More on Hyderabad, India. Jobs in Hyderabad.