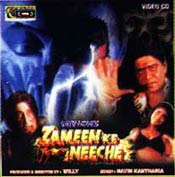 Arpan Panicker / fullhyd.com
EDITOR RATING
1.0
Performances
Script
Music/Soundtrack
Visuals
NA
NA
NA
NA
Suggestions
Can watch again
NA
Good for kids
NA
Good for dates
NA
Wait for OTT
NA
A horror movie is supposed to scare you, or at least send a shiver down your spine. Of late, though, the definition of horror movies has changed. They are more funny than scary. But when a horror movie either puts you to sleep or gives you a headache, you know that the makers of the movie are scraping the bottom of the barrel. Zameen Ke Neeche is one such movie. Things get worse and worse, and the best part of the movie is the interval.

You have a woman who gets raped and killed by a bunch of roughnecks on a full moon night, on a lonely road. Her body is found the next day and her family is notified.

Her sister, Tina, vows to avenge her death. She finds herself a stupid looking boyfriend to help her, but they forget all about the murder and run around trees singing insipid duets with the worst lyrics imaginable. And this causes the dead sister to get tired of waiting for justice, and she rises from the grave. In an attempt to make her look horrifying, the makeup guys end up making her look comic. She seems to have put on a lot of weight in the grave.

Then the zombie goes around killing her murderers, and anyone else who might think of stopping her. She doesn't have much to do as almost all the murderers are petrified at her sight, and don't make much of an effort to escape. Only Shera (Shakti Kapoor), the last villain, gives the zombie some trouble. He tries a lot to escape her, and even kidnaps her sister, boyfriend included.

But there is no running away from the dead, and so even Shera meets a gruesome end. Then the two sisters have a tearful reunion (for which zombie sis doffs her makeup, glowing in a white sari). After that the dead sister goes back to the grave and the remaining cast members, i. e. the live ones, come together for a 'say cheese' photograph. No one in the theater was laughing, though. There were some sighs of relief, on the realization that the movie had at last come to an end.

ADVERTISEMENT
This page was tagged for
Zameen Ke Neeche hindi movie
Zameen Ke Neeche reviews
release date
Sohail Khan, Kirti Shetty
theatres list
Follow @fullhyderabad
Follow fullhyd.com on
About Hyderabad
The Hyderabad Community
Improve fullhyd.com
More
Our Other Local Guides
Our other sites
© Copyright 1999-2009 LRR Technologies (Hyderabad), Pvt Ltd. All rights reserved. fullhyd, fullhyderabad, Welcome To The Neighbourhood are trademarks of LRR Technologies (Hyderabad) Pvt Ltd. The textual, graphic, audio and audiovisual material in this site is protected by copyright law. You may not copy, distribute, or use this material except as necessary for your personal, non-commercial use. Any trademarks are the properties of their respective owners. More on Hyderabad, India. Jobs in Hyderabad.