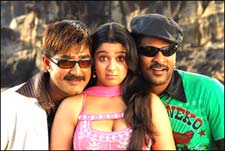 EDITOR RATING
5.0
Performances
Script
Music/Soundtrack
Visuals
7.0
5.0
5.0
6.0
Suggestions
Can watch again
No
Good for kids
Yes
Good for dates
No
Wait for OTT
Yes
It always feels nice to be laughing heartily in a movie theater. And if everyone else around is laughing, too, you'll even look normal. Michael Madana Kamaraju is quite likely to make you look that. A meaningless comedy, it has enough laughing gas to help you recuperate from the last news bulletin you've seen, and keeps you light-headed long enough to make you think you've changed completely.

Madan (Srikanth) hates love so much, he'd probably tell girls who don't even know him that he's breaking up with them. When he meets Archana (Charmme), a brilliant budding fashion designer, at Goa, however, he is impressed enough to hire her for his office as his creative director.

Now as any self-respecting Telugu youngster will tell you, it's unethical to work when there's a figure like that puttering around, and Madan slowly and spinelessly falls in love. However he has made his aversion for love very open to Archana right in the beginning, and she's told him how much she likes him for it, so he's now caught in a trap of his own making, and in his own ego.

Caught in this trap however is also Kamaraju (Sunil), Madan's cousin, who is in love with Mandira but cannot marry her until the love-hater Madan agrees, since Kamaraju's parents have decreed that he can marry only a girl Madan has okayed, else he won't get to inherit their wealth. Indeed, it's tough when getting your wealth and your babe both depend on someone else. If you ever get into a situation like this in life, we at fullhyd.com advise you to find a new cousin.

Kamaraju decides that only if Madan himself admits his love will he accept Kamaraju's love, and so starts plotting to break Madan down mentally. So when Archana goes to Vizag for a potential alliance, he gets a fake wedding card printed with the photo of a random guy, and gets it delivered to Madan. Madan expectedly crumbles, but decides to handle the situation bravely, and so heads to a bar with lots of cash.

Happiness in a bar can be found in various names - Kingfisher, Blender's Pride, Royal Challenge, Old Monk etc. - but Madan finds a new one, Ravi (Prabhudeva). The person whose photograph he saw in the card is sitting right in front of him, and Madan goes down on his knees and begs for his love.

Ravi is actually Michael, a crook who could sell the Taj Mahal to the Government of India and even charge VAT on it (at whatever the current rate is for sale of national monuments). He quickly puts two and two together and comes up with a really big amount. He claims he is indeed Ravi, and that he will help out, but that he needs some cash to pay hotel bills and stuff until his parents come from the US. Madan cheerfully writes out a cheque for Rs. 5 lakhs.

Michael may not be the smartest at math, but he knows that there are several 5 lakhs in 10 crores, which is what Archana's parents are worth. A man with instantly scalable vision, he quickly ups his ambition from extracting some more cash out of Madan to marrying Archana. So he arranges for a full drama troupe and co-crooks to play his family, including S V Ranga Rao (Kota), Chota Seenu (Venu Madhav), Malli (Mallikarjuna Rao), Julie (Abhinayasri), Kantamma (Kovai Sarala) and Venkata (Kondavalasa). They all cosy up to Archana's father (Nagababu), and get him to agree to the marriage.

Michael Madana Kama Raju is a timepass flick, with LOLs interspersed generously. From Giribabu's chilli gavva joke to a police van chasing another police van on the streets in the climax, there's enough fun to forget everything in between. Sure, the plot is not based on any real-life story and you won't find any logic in it, Brahmanandam's role as James has more crap than fun, Ali is totally wasted, and Archana's confession that she loves Madan looks quite out-of-sync with everything until then, but on the final scales, the giggles outweigh the groans.

The full-fledged Telugu comic crew on the screen itself means things can't go terribly wrong, and even if they have sorry lines now and then, and the film moves from a rather sedentary first half into a more vivacious second as they all slowly incarnate on screen.

The climax, however, is a letdown - it looks like it was inspired by that of Jaane Bhi Do Yaaron, and it's unfortunate that it isn't inspired fully enough. And the songs are ordinary, but there is a dance by Prabhudeva that can really impress if you don't already know what to expect from him. If you need to know, Asha Saini shows plenty of skin - in fact, more than you thought she had.

Michael Madana Kama Raju is a ticklish comedy, and a good outing if you want to prove to yourself that you can be happy at the slightest provocation. And yes, take your family along - Charmme stays more or less decent.
Share. Save. Connect.
Tweet
MICHAEL MADANA KAMARAJU SNAPSHOT

ADVERTISEMENT
This page was tagged for
michael madana kamaraju telugu movie
Michael Madana Kamaraju telugu movie
Michael Madana Kamaraju reviews
release date
Srikanth, Prabhudeva
Follow @fullhyderabad
Follow fullhyd.com on
About Hyderabad
The Hyderabad Community
Improve fullhyd.com
More
Our Other Local Guides
Our other sites
© Copyright 1999-2009 LRR Technologies (Hyderabad), Pvt Ltd. All rights reserved. fullhyd, fullhyderabad, Welcome To The Neighbourhood are trademarks of LRR Technologies (Hyderabad) Pvt Ltd. The textual, graphic, audio and audiovisual material in this site is protected by copyright law. You may not copy, distribute, or use this material except as necessary for your personal, non-commercial use. Any trademarks are the properties of their respective owners. More on Hyderabad, India. Jobs in Hyderabad.