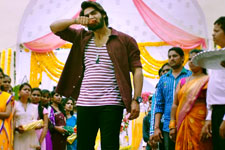 Chaitanya Karthik / fullhyd.com
EDITOR RATING
1.5
Performances
Script
Music/Soundtrack
Visuals
2.0
2.0
4.0
2.0
Suggestions
Can watch again
No
Good for kids
No
Good for dates
No
Wait to rent it
No
When you are going to watch a movie titled 90 ML and you see the disclaimer at the beginning of the story that says "alcohol consumption is injurious to health", you can't help but laugh at the irony of it. Unfortunately, this disclaimer is the second funniest thing about 90 ML. The funniest would be the script. If only it were intentional.

Devadasu (Kartikeya) is born with a rare condition called Fetal Alcohol Syndrome. It is a condition in a child that is caused due to exposure to alcohol during the mother's pregnancy. 90 ML takes the name but changes the game. Devadasu has to take three doses of 90 ML everyday, and if he misses even one of those doses, he is on his way to meet his creator.

Because this is a love story, he falls in love with Suvasana (Neha Solanki), who hails from an overly nice family where the kids address their parents as "amma gaarandi" and "naannagaarandi". Also, everyone in the family is trained in the martial arts (it is supposed to be funny, but the audiences beg to differ). And they all detest alcohol, meaning Devadasu needs to keep Suvasana in the dark about his condition.

The shit hits the fan when our poor guy gets stopped for a Drunk and Drive check one day with Suvasana riding pillion, and he doesn't even have to blow into the breathalyzer - he just exhales and the breathalyzer reads 270. Suvasana breaks up with him instantly. And to add to his woes, a businessman Jon Wik (Ravi Kishan) who Devadasu's crossed paths with is also seriously tripping on him.

90 ML promised to be an entertaining and refreshing subject, but it is neither. The director's idea of refreshing is simply introducing a medical condition nobody has heard of. He completely forgot about making the characters interesting enough for people to be invested in. For example, Suvasana gets attracted to Devadasu because she sees him saving a kid (she makes a video of him saving the kid and posts it on Facebook), and then falls in love with him when she sees a video of him (again on Facebook) bashing some bad guys - post that, she is just alternating between "sad and crying" and "sad but not crying". I hope good female characters become mainstream one day, but it doesn't look like that day is in sight for now.

After Karthikeya was applauded for his performance in Gang Leader, you would assume that he would have much richer roles to choose from. Well, he probably had one too many glasses of 90 ml while listening to the script of this one.

Most of the other characters are just absurd and goofy. Some scenes, particularly the ones involving the goofiest guy in the movie, Ravi Kishan, make you wonder just what the director was smoking.

The music is good - Anup Rubens seems like the only technician who put his heart into the movie - but a script like this cannot be redeemed by just the music or the background score. The rest of the crew? They were probably clinking glasses of 90 ML throughout the shoot.

The editing is bad - by the time a scene sinks in, there's another random scene shoved into your face. The screenplay doesn't do its job, either - it appears to have been carefully curated to make you doze off. Everyone goes outside during the intermission, right? Most of them never returned. If only I had that luxury.

Bad execution, bland performances, over the top dialogues that are hard to buy into - the list of things wrong with 90 ML is pretty long. You are clueless about what it is that the director plans to say at the end of the day in this carnival of snores. And you'd need more than 90 ML to get over this.
Share. Save. Connect.
Tweet
90 ML SNAPSHOT 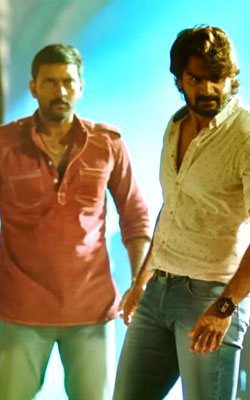 ADVERTISEMENT
This page was tagged for
90 ml full movie telugu
90 ML telugu movie
90 ML reviews
release date
Kartikeya, Ravi Kishan
Follow @fullhyderabad
Follow fullhyd.com on
About Hyderabad
The Hyderabad Community
Improve fullhyd.com
More
Our Other Local Guides
Our other sites
© Copyright 1999-2009 LRR Technologies (Hyderabad), Pvt Ltd. All rights reserved. fullhyd, fullhyderabad, Welcome To The Neighbourhood are trademarks of LRR Technologies (Hyderabad) Pvt Ltd. The textual, graphic, audio and audiovisual material in this site is protected by copyright law. You may not copy, distribute, or use this material except as necessary for your personal, non-commercial use. Any trademarks are the properties of their respective owners. More on Hyderabad, India. Jobs in Hyderabad.