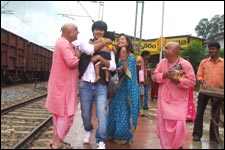 EDITOR RATING
3.0
Performances
Script
Music/Soundtrack
Visuals
6.5
2.0
5.0
7.5
Suggestions
Can watch again
No
Good for kids
No
Good for dates
No
Wait to rent it
No
People waiting for a train to come can be divided into 2 categories: those waiting on a platform, and those waiting on the tracks. Vaidehi (Madalasa) belongs to the latter category - she is desperate to kill herself. You're thinking it must be because of her horrible lip sync, but it turns out that it is because her parents want to get her married against her wishes.

Anyway, she is at the Annavaram station waiting for the Simhadri Express, when her suicide note lands in the hands of Ram (Nikhil), who is also waiting for the same train. Now walking around with someone else's suicide note in your pocket is generally a bad idea - if you accidentally die, it'll take half the state's police force to figure out what exactly happened. Ram also has an additional problem: something tiny, with no intelligence and desperately crying for attention - no, not the script of this movie, but a baby.

Someone's abandoned this baby at the railway station, and Ram decides that the woman who wrote the suicide letter had a baby out of wedlock, and is about to kill herself out of shame. He decides to find her and stop her, but hunting for a woman who is trying to die can be tricky - she can be near some railway tracks, she can be at some pesticide shop, she can be at the edge of a cliff, and she can be in any theatre screening this movie. However Ram decides to look for her in the station itself, since there are already a lot of women here, while in some other place he'd have to first wait for women to come there, and they might not even want to commit suicide after that. As several men will tell you, women can never be trusted.

Anyway, he spots Vaidehi and starts suspecting that she's the one - she's the only one whose lip movement is not matching anything that she's saying. He starts following her, but you cannot follow a woman in India if you don't have a PAN number (or whatever the law is), and so he accosts and questions her, and she explains that she has nothing to do with the letter. He believes her, and grateful for that, she changes her clothes in front of him. Yes. Now think of the possibilities if you sent her an SMS saying "You're a tigress in bed."

Anyway, together they try hunting for the mother of the baby, and in the process make you want to stand on some railway track yourself. There's a senti song that has everyone in the station join in even though they don't even know the couple until then, a skimpily-clad item girl starring as herself dancing right on the platform, Ram single-handedly beating up half a dozen factionist goons, a cop repeatedly getting hit on his 'nads, and a bunch of other unrelated stuff that makes you want to gently tap the shoulder of the person sitting in the row ahead and complain to him that the guy sitting behind you is kicking your seat.

Alasyam Amrutham is so poorly written, you feel like it must have already been made. And if you stopped to analyze that sentence, you've already put in more intellectual effort than went into scripting this one. Chandra Mahesh takes up a subject that requires exceptional creativity - a young girl wanting to kill herself, but having her view of life changed with experiences on a railway platform in the time that her train gets delayed - and writes a tale that makes Tinkle stories look like Nobel literature prize material.

For starters, he makes the girl look utterly dumb - her reason for wanting to kill herself, her roaming around with loads of cash and jewelry when she just wants to kill herself, her changing in front of a total stranger for no reason, her expression of her falling in love with him - and that means you cannot take her seriously. The comedy is not a patch on current Tollywood standards, and only makes the film look unfocused - as does the weird item song aimed strictly to titillate. There's hardly a single loaded line in the entire film. On the whole, the feel is of the script being incidental to a formula-driven film. And there's too much flesh and adult jokes for this to be a family film, either.

The music too is too mass-y to make this look like a serious movie. It's possible to like "Olammi Tingarabuchchi", but that's like having a fetish for female underarm hair - you have to keep it to yourself. Nikhil appears condemned to star in B-grade films, which is a pity given he's equipped for better stuff. Madalasa is expressive, too, so ditto. Most of the other cast comprises experienced actors.

The film is set in the pristine environs of East Godavari, and all the greenery is a visual treat. Aside of that, if you want to watch this one, you probably already have the reason in a letter in your pocket.
Share. Save. Connect.
Tweet
ALASYAM AMRUTHAM SNAPSHOT

ADVERTISEMENT
This page was tagged for
Alasyam Amrutham telugu movie
Alasyam Amrutham reviews
release date
Nikhil, Madalasa
theatres list
Follow @fullhyderabad
Follow fullhyd.com on
About Hyderabad
The Hyderabad Community
Improve fullhyd.com
More
Our Other Local Guides
Our other sites
© Copyright 1999-2009 LRR Technologies (Hyderabad), Pvt Ltd. All rights reserved. fullhyd, fullhyderabad, Welcome To The Neighbourhood are trademarks of LRR Technologies (Hyderabad) Pvt Ltd. The textual, graphic, audio and audiovisual material in this site is protected by copyright law. You may not copy, distribute, or use this material except as necessary for your personal, non-commercial use. Any trademarks are the properties of their respective owners. More on Hyderabad, India. Jobs in Hyderabad.