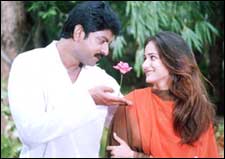 Aathade Oka Sainyam, though being a novelty, is not entirely stinky. The parts where the funny people with the terrific sense of humor appear are worth the time in the hall. But to the disappointment of the crowds, there's only one such actor in the movie - the heroine.

The dazed expression on her face will only make you laugh till a certain amount of time. After that she shows signs of her first expression, and that's when you actually dash out of the theater for the fear of choking yourself through excessive laughter.

If you are amongst the people who can stand that (i. e. you have already seen Uday, Aarti, Nitin etc.), then you will get to know that this movie also has other comedians, actors and a novel story.

The happy family of Jagapathi Babu (Suman, Sita etc.) is destroyed when Prakash Raj kills Suman, and terms him (Suman) as the traitor in a bank scam. The account holders then symbolically yank off all the jewels from the mourning family members.

In Germany, Jagapathi learns of the tragic misfortune that his family has undergone. He grimaces when he imagines his family putting up with the heroine trying to cry. They were already grieving over the loss of the head of the family, Suman.

So Jagapathi is all fired up. He starts running like crazy. Then sense prevails, and he takes the plane to India.

That was the flashback. Jagapathi has been preparing an army of his own, since then, to battle Prakash Raj. He hires a mimicry artist, a magician and a software professional to help him in his task. The heroine works free for him.

Then the game of revenge begins. The hero is always a move ahead of the villain, who's just standing there like a dead dodo. This is basically the difference between the tactics of hero and villain: 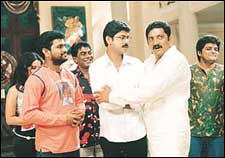 This Not A Penny More, Not A Penny Less inspired story has some really inventive con methods that have never been on the screen before. That's because this dud of a villain was also never seen on the screens before. Finally, the hero wreaks his vengeance on the villain and the latter is only too happy to get out of this stupid role.

Prakash Raj as the comedic villain has done a good job. So has Jagapathi. Ali and other comedians also manage to rake up a few guffaws.

The lyrics and the music are in tune with the rest of the movie. Though the Telugu audience is quite sympathetic towards moviemakers, they might not actually like all the immature things these makers have done. Like making this movie.

ADVERTISEMENT
This page was tagged for
athade oka sainyam seetha HD images
Athade Oka Sainyam telugu movie
Athade Oka Sainyam reviews
release date
Jagapathi Babu, Neha
Follow @fullhyderabad
Follow fullhyd.com on
About Hyderabad
The Hyderabad Community
Improve fullhyd.com
More
Our Other Local Guides
Our other sites
© Copyright 1999-2009 LRR Technologies (Hyderabad), Pvt Ltd. All rights reserved. fullhyd, fullhyderabad, Welcome To The Neighbourhood are trademarks of LRR Technologies (Hyderabad) Pvt Ltd. The textual, graphic, audio and audiovisual material in this site is protected by copyright law. You may not copy, distribute, or use this material except as necessary for your personal, non-commercial use. Any trademarks are the properties of their respective owners. More on Hyderabad, India. Jobs in Hyderabad.