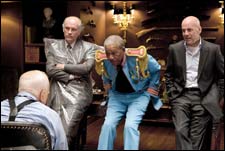 Samrat Sharma / fullhyd.com
EDITOR RATING
7.0
Performances
Script
Music/Soundtrack
Visuals
8.5
6.5
8.0
7.0
Suggestions
Can watch again
Yes
Good for kids
No
Good for dates
Yes
Wait to rent it
No
Red, the comic mini-series, was a moderately interesting and mostly drab comic, that I remember for being quite boring in most parts. It was, of course, picked up for a film because an old man kicking a**e is always good times at the cinema, and the fact that it was created by Warren Ellis, one of the biggest names in comics, didn't hurt either.

Some films are so far away from their source material that reading the comic and watching the film is almost moot, and fans of the comic can't recognise the source in what they're watching at all. Luckily for us, Red is exactly that film. Injected with a sense of humour and a clear purpose to be entertaining and lean, Red turns out to be a far less sophisticated but way more fun exercise than the comic it is based on.

The comic's skeleton is still there - CIA agent Frank Moses lives a retired life, with the only contact with society being his payroll coordinator he speaks with every now and then. When the order for him to be eliminated is given, he employs his not inconsiderable talent in wasting fools into self-preservation. From that point on, the agenda of the film completely changes.

The comic's story is about the horrible things a man has had to do for his country and the toll it takes on his soul; when the kill order is given, he simply uses his skill to eliminate the latest threat to his existence. The film, on the other hand, is about Bruce Willis being given a chance to be awesome once again. Willis is fun and very much at ease being the retired yet lethal agent, and his take on the character is that of a man who must solve the latest problem using the skill set he has.

There are two big strengths to Robert Schwentke's take on the film. The first is the casting. As Frank Moses realises that all his friends are likely in trouble too, he gets about finding them. Enter Morgan Freeman, John Malkovich and Helen Mirren. At any given time, this cast would amaze a film-goer. Here, they are a really excellent addition to what is a very fine not-the-damsel-in-distress take on the payroll contact by Mary Louise Parker, and Karl Urban's CIA adversary, who adds an extra dimension to a one-sided role and completely elevates the film.

The second is the action. Schwentke keeps his action clean and his set pieces grounded. This means that while all the moments in the film are very eye-popping, none of them have the stylized hyper-violence that keep such films from being unwatchable. This is simply a cleanly-shot film with some very well thought out over-the-top action.

It helps that the films moves its locales every now and then. Not only does it help the variety and the pacing, this gives the action team new tools to play with, and the production benefits from the madness they conjure up. This isn't the best action film you will see all year, but the medium budget fun these guys get to have is palpable across the screen.

Of special note is Thom Noble's editing. The best editing is the one you can't notice, and for years, this man has been perfecting his craft on Hollywood action films (closer home, he did some work on English, August too). He brings his very keen sense of pacing to the table, and a fluffy entertainer only benefits from the partnership he has with the cinematographer who creates neat, assured shots for him to play with.

All this talk of the technical side may lead one to think that this is a very technically-accomplished film (which is true), but it doesn't address the fact about how much fun it is. The entire crew and cast are in on the joke, and the freshness can be felt while watching. Giving Helen Mirren a sniper rifle will always end up in something completely awesome, as will having John Malkovich shoot a rocket mid-trajectory. The film does this, and more, and just for that, it deserves to be watched on a lazy Sunday afternoon with your friends.
Share. Save. Connect.
Tweet
RED (ENGLISH) SNAPSHOT

ADVERTISEMENT
This page was tagged for
Red (English) english movie
Red (English) reviews
release date
Bruce Willis, Mary-Louise Parker
theatres list
Follow @fullhyderabad
Follow fullhyd.com on
About Hyderabad
The Hyderabad Community
Improve fullhyd.com
More
Our Other Local Guides
Our other sites
© Copyright 1999-2009 LRR Technologies (Hyderabad), Pvt Ltd. All rights reserved. fullhyd, fullhyderabad, Welcome To The Neighbourhood are trademarks of LRR Technologies (Hyderabad) Pvt Ltd. The textual, graphic, audio and audiovisual material in this site is protected by copyright law. You may not copy, distribute, or use this material except as necessary for your personal, non-commercial use. Any trademarks are the properties of their respective owners. More on Hyderabad, India. Jobs in Hyderabad.