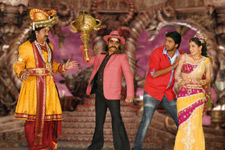 Deepa Garimella / fullhyd.com
EDITOR RATING
4.5
Performances
Script
Music/Soundtrack
Visuals
7.0
3.0
4.0
3.0
Suggestions
Can watch again
No
Good for kids
No
Good for dates
No
Wait for OTT
Yes
There is a scene in Yamudiki Mogudu in which a bunch of cops discover an unconscious skimpily-clad (as skimpily-clad as an apsara can be) woman dumped at the entrance of their police station. They promptly, naturally, gleefully, start planning to take her in and do "you-know-what" with/to her. But wait, there are rules. You see, the boss has to go first. This is all a joke, mind you.

Of course, in the next scene, there are things that happen that make them realize that what they were thinking of is wrong. But that is immaterial to the fact that nobody - not the writers, not the director, not the target audience - found it inappropriate that the subject of the joke was the act of rape, nay, gangrape, by policemen, no less.

This, ladies and gentlemen, is Yamudiki Mogudu for you. Where the Lord Of Death is an alcoholic, depraved womanizer with very low standards in women. Where Chitragupta threatens an earthling by telling him that he will sleep with his wife (literally - not even as a swear-word). Where the gods are too dumb to know that water reflects (we kid you not). Where graphics are shoddier than a 3-year-old's art project. This, in sum, is the filmmakers' idea of what the "B&C centre" audience will enjoy.

The story is about a young man, Naresh (Allari Naresh), who has a blessed destiny. He was born without a "talaraatha" because Lord Brahma made a gaffe when he was born. As a result, Naresh is untouched by suffering. His father, however, is not - Naresh is in his twenties and has not cleared his Intermediate exam yet; and also doesn't earn enough since he is some sort of theatre actor.

But one day, Narada (Naresh) starts doing his thing, and interferes in the proceedings. A twist of fate causes Yama's daughter Yamaja (Richa Panai; someone asked her to dub for herself, in a clear slap to the organizers of the Prapancha Telugu Mahasabhalu) to drop down to earth and enter Naresh's life.

Slowly, they fall in love with each other. However, Yama now comes to take her back. In a supreme display of love, courage, heroism and the crappiest graphics you have ever seen on screen, Naresh hangs on to Yama's buffalo's tail and follows him to his abode. Meanwhile, Yama delegates some of his work to his son (Master Bharath).

Yamudiki Mogudu is perhaps among the cheapest films Allari Naresh has been seen in in recent times, both in terms of content and aesthetic value. The movie tries to handle this "socio-fantasy" theme, but clearly, there were no resources. The maximum the makers could deliver is an elaborate set depicting Yamalokam, which is possibly where they spent 95% of their money.

The comedy is not explicitly A-rated, but this is clearly no movie for the family. Consider this: in the end, when Brahma appears to marry Naresh and Yamaja, Narada asks Brahma when the muhurtam for "daaniki" is. The writers' notion of making Yamalokam funny seems to be merely to make things sleazy and stupid.

However, to the film's credit, not all of it is this adult-rated. Some of the jokes do work. The puns are a little lame, but there are good moments. In the midst of the crudeness, it is mostly left to Allari Naresh to make things look as clean as possible. Indeed, he is the cleanest - and the best - thing about Yamudiki Mogudu.

Master Bharath, meanwhile, is quite amazing - he will perhaps go down in history as the only male actor to whom adolescence has been kind. The boy is expressive and skilled, and has great comic timing. Plus, some of his lines have been smartly tweaked to suit his persona.

The heroine looks fine, but the decision of letting her dub for herself was clearly a bad idea. Her Telugu makes her sound like one continuous marathon of the 3 Roses "rangu, ruchi, chikkathanam" ad, and is grating enough to put you off the film as a whole.

Sayaji Shinde (Yama) and Krishna Bhagawan (Chitragupta) are saddled with bad make-up and a bad wig, respectively, but they're the kind who cannot be bad at their roles ever. Naresh as Narada is good as well.

Ramyakrishna as Yama's wife Ayyo is a picture of grace for a while, but they kill it by making her wear a little black dress and dance alongside the lanky Allari Naresh.

The songs aren't great, but nobody notices. The graphics, as we pointed out, are the kind a beginner could churn out. As for the general visuals, poor editing and a general lack of attention to the production design are visible.

Catch this one if you've got time to kill and no one to go home to.
Share. Save. Connect.
Tweet
YAMUDIKI MOGUDU SNAPSHOT 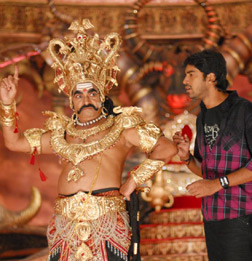 ADVERTISEMENT
This page was tagged for
Yamudiki Mogudu telugu movie
Yamudiki Mogudu reviews
release date
Allari Naresh, Naresh
theatres list
Follow @fullhyderabad
Follow fullhyd.com on
About Hyderabad
The Hyderabad Community
Improve fullhyd.com
More
Our Other Local Guides
Our other sites
© Copyright 1999-2009 LRR Technologies (Hyderabad), Pvt Ltd. All rights reserved. fullhyd, fullhyderabad, Welcome To The Neighbourhood are trademarks of LRR Technologies (Hyderabad) Pvt Ltd. The textual, graphic, audio and audiovisual material in this site is protected by copyright law. You may not copy, distribute, or use this material except as necessary for your personal, non-commercial use. Any trademarks are the properties of their respective owners. More on Hyderabad, India. Jobs in Hyderabad.