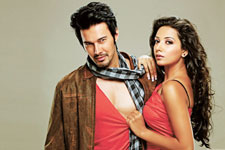 Nupur Barua / fullhyd.com
EDITOR RATING
3.0
Performances
Script
Music/Soundtrack
Visuals
4.0
2.0
4.0
5.0
Suggestions
Can watch again
No
Good for kids
No
Good for dates
No
Wait to rent it
No
There is no apparent reason one would name a movie, filled with grouchy men, Spark. The title is misleading, to say the least, and the film itself does not do much to add any excitement in your life. Unless you are a Rajniesh Duggal fan (did you know that he was offered this movie after the director saw him in Khatron Ke Khiladi, which, by the way, he won?).

Arjun is a dashing young man, who works as some sort of delivery boy in some city in Germany. Out of the blue, he meets with Anupama (Subhashree Ganguly), whom he has known since his college days. One thing leads to another, and we find out that he has always been in love with her, or some such. Eventually, they get together.

This is not a love story, however. Which is why Arjun has to run back to India pretty abruptly. It appears that his father (Ranjeet) has been roughed up, and Arjun now needs to be with him to sort out the mess. It is soon revealed that his father is actually a foster parent, and that Arjun now has to figure out who his parents are. And, for some reason, this is a big controversy in the region that he comes from.

Through flashbacks galore, we learn that Arjun's existence is intricately linked with the local politicians/goons, and before he can say "Spark", he becomes a reluctant participant of all the dirty games that these men indulge in. Inevitably, the film becomes a revenge drama. To know what it is exactly that Arjun needs to avenge, you have to watch the movie.

Spark has too many twists, and none of them make sense. It is almost as if the writers thought it was clever to confuse the audience with all the suggestions and red herrings and other such devices, but forgot to write a story. Surprisingly, it all falls in place, which must mean that somebody was paying attention to the screenplay. The dialogues are pseudo-macho, almost jingoistic, and mostly sexist.

The characters fare no better. The whole romance angle is completely irrelevant. No sparks there, in case you are wondering. Everybody in the movie is more interested in being the hero, which is why the hero seems pretty out of sorts by the end of it all. Add to that the needless action (since the lead actor has been selected on the basis of his performance in the above-mentioned TV show), and constant yo-yoing between India and Germany for some reason, and you get a movie sans logic, and definitely sans sparks. Of course, you also get unintentional humour, and that is always a boon.

Rajniesh Duggal has always been a sincere actor, and he has come a long way since his debut not too long ago. Here, too, he tries his best to become a commercial hero, but the script fails him. There are times when he goes OTT with his expressions - actually, he fluctuates between expressionless and animated. His action sequences are convincing, despite the heavy duty wire-work.

Subhashree Ganguly does not impress, at all. To be fair, there is not much that she gets to do in this one, except sigh over her co-star. Ranjeet is the good guy here, and that itself is worth a watch. As for Ashutosh Rana, who has a double role, we are sure he was doing this for the money. He exhibits total lack of charisma, or involvement with his role. Govind Namdev is predictable, as usual.

The movie is set in UP and Germany, and the production design is rather lazy. As are the costumes. It seems that the makers of the film just picked on a template from countless other movies and pasted them here. The music tries too hard to be appealing, but there is nothing new, nor anything that sounds original. As for the camera-work, the cinematographer must have fallen asleep - most of the shots have weird angles that are reminiscent of daily soaps on Indian television half a decade ago. The editing could have been much crisper, and better paced.

There is no point in watching Sparks. Unless, as we mentioned right at the beginning, you are a Rajniesh Duggal fan. Or even a Ranjeet fan. Or just a masochist.
Share. Save. Connect.
Tweet
SPARK SNAPSHOT 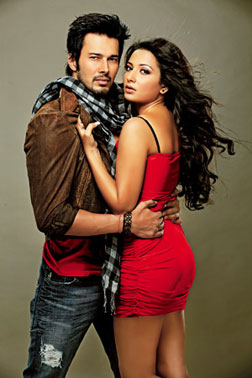 ADVERTISEMENT
This page was tagged for
Spark hindi movie
Spark reviews
release date
Rajniesh Duggal, Subhashree Ganguly
theatres list
Follow @fullhyderabad
Follow fullhyd.com on
About Hyderabad
The Hyderabad Community
Improve fullhyd.com
More
Our Other Local Guides
Our other sites
© Copyright 1999-2009 LRR Technologies (Hyderabad), Pvt Ltd. All rights reserved. fullhyd, fullhyderabad, Welcome To The Neighbourhood are trademarks of LRR Technologies (Hyderabad) Pvt Ltd. The textual, graphic, audio and audiovisual material in this site is protected by copyright law. You may not copy, distribute, or use this material except as necessary for your personal, non-commercial use. Any trademarks are the properties of their respective owners. More on Hyderabad, India. Jobs in Hyderabad.