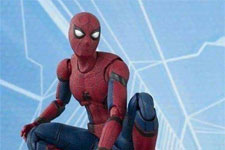 T J Reddy / fullhyd.com
EDITOR RATING
7.5
Performances
Script
Music/Soundtrack
Visuals
8.0
7.0
7.0
9.0
Suggestions
Can watch again
Yes
Good for kids
Yes
Good for dates
Yes
Wait to rent it
No
Tom Holland swung his way into the world's collective consciousness as the strapping young Spiderman in the trailer for Captain America: Civil War, and now here he is with his very own project, in what is perhaps the best reboot of the Spiderman franchise yet. And his being shepherded by the thinking fans' favourite superhero Iron Man gives the film its X-factor, especially since the film feels like a conflation of the Iron Man trilogy, with the best bits from the films cherry-picked into making an enjoyable Spiderman stand-alone movie.

Spiderman Homecoming follows the metamorphosis of Adrian Toomes, a disgruntled construction contractor whose career and sources of income are seemingly put on halt after the events of the original Avengers film. Toomes' disillusionment with the world around him leads him to repurpose the technology left behind by the Chitari to create weapons to be sold on the black market, which will lead to a global crisis if they become available to sundry tyrants and terrorists.

Meanwhile Peter Parker is having a crisis of his own, as after being given a taste of the action-packed Avengers' existence, he is now decreed a "trainee" by Tony Stark who keeps him away from the vicious world of global attacks. Spiderman however stumbles onto a few of Toomes' henchmen while attempting to stop a robbery, and gets enmeshed deeper and deeper into the web (pun intended) of intrigue that are the operations of The Vulture (Toomes in a suit consisting of mechanical wings forged from Chitauri technology).

Never to be forgotten is Spiderman's perpetual awkwardness as a teenager, which forms the remainder of the plot and helps the audience understand and engage with Peter Parker, the boy. His friends might be multi-ethnic now, his classrooms more liberal and his world more tech-fuelled, but Parker himself remains a teen struggling through life as a high-schooler.

What this film does, that audiences at large would like reboots of superhero films to do, is reimagine the whole saga of the protagonist attaining and getting acquainted with his/her superpowers. The movie takes a fresh approach to the origins story, and that includes Spiderman getting one of the best super-suits this side of Batman. Spiderman now has web-shooters that offer over 500 variants of his humble straight line web - thanks to the power of Iron Man's big bucks. And that is the least of the multitude of capabilities the suit has.

Then, the chemistry shared by the titular superhero and his charismatic mentor as they try to help each other discover each other's deep-seated potential for doing good makes for a compelling narrative. The film also keeps itself fresh by pitting the hero and villain against each other in more battles than one. This creates a newfound dynamic where the hero is the one who seemingly has to sharpen his skill set before he becomes a formidable threat to the villain. It is a rarely seen dimension of superhero filmmaking.

For all the things that it gets right, however, the film gives you plenty of bones to pick with it, too - the motivations and actions of Michael Keaton's Vulture and the film's resulting stop-start pace being the main one.

Pacing an 120-minute film is a skill in itself, and the movie suffers from some parts of it (Peter exploring his suit) being much more engaging than others (his saga with The Vulture). This is primarily because The Vulture is a mostly menacing but ultimately poorly realized bad guy. His look and gadgets are a sight to behold, but the inner mental workings which lead him to do what he does, leave a lot to be desired. A hero is only as compelling as his villain, and Marvel is yet to find a big bad as compelling as Loki.

That bit of nit-picking aside, this Spiderman has his own set of advantages. Holland is younger which sells him as a teenager better, the Spidey suit is imaginative and inventive while still in keeping with the neighbourhood superhero aspect of the character, the character's sandbox is much less isolated which gives the character a chance to well and truly explore his possibilities, and the uncle is not dead, which we can all agree is a plot point that we needed some respite from.

As one might expect from a film which has a production budget of a $175 million, it looks fantastic. The visuals are scintillating, and the effects impress and then some. The music keeps the film ticking along, though you would have expected a stronger and more memorable theme for Spiderman when a musician of Michael Giacchino's calibre is at play.

In conclusion, take your companion, your kids, your parents and your family dog to Spiderman Homecoming. It ticks most boxes for a summer movie, and is bound to keep most, if not all, in the audience entertained.
Share. Save. Connect.
Tweet
SPIDERMAN: HOMECOMING (3D) (HINDI) SNAPSHOT 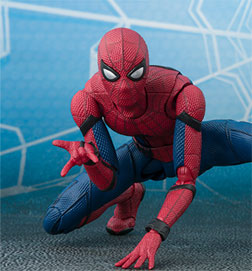 ADVERTISEMENT
This page was tagged for
spiderman homecoming hindi
Spider. 3D movie Hindi
Spiderman: Homecoming (3D) (Hindi) hindi movie
Spiderman: Homecoming (3D) (Hindi) reviews
release date
Follow @fullhyderabad
Follow fullhyd.com on
About Hyderabad
The Hyderabad Community
Improve fullhyd.com
More
Our Other Local Guides
Our other sites
© Copyright 1999-2009 LRR Technologies (Hyderabad), Pvt Ltd. All rights reserved. fullhyd, fullhyderabad, Welcome To The Neighbourhood are trademarks of LRR Technologies (Hyderabad) Pvt Ltd. The textual, graphic, audio and audiovisual material in this site is protected by copyright law. You may not copy, distribute, or use this material except as necessary for your personal, non-commercial use. Any trademarks are the properties of their respective owners. More on Hyderabad, India. Jobs in Hyderabad.