Sustaining near fatal head injuries, Vadde Naveen recovers real quick from an accident that has his co-passenger in a coma. But Naveen's lost whatever memory he has had. So begins the search for his identity, his past, his people... and some acting skills! Meanwhile, a bad-ass gangster's terrorising an entire college with HIS acting skills, his punk son and his sense of dressing. The victimised students are hopelessly waiting to be liberated, from him and, more importantly, from the daunting syllabus! All of them appear to have spent the last 40 years of teenage in that very campus, redefining phrases like "growing up together", "getting old with each other" etc.

One such maturely juvenile victim (Shivaji Raj) chances upon Naveen when he's softening up some ruffians. A bulb suddenly flashes in his thought balloon as he has this brilliant idea of using Naveen to clean up the sleaze at the college. So he approaches this totally unrealistic hospital, actually acting like a caretaker for the patient (!), to con the dopey docs into sending Naveen with him. Jyothi (Kiran Gill) assists in the windup by pretending to be the lost love of Naveen.

The defining moment of the film can be termed as the scene when the docs ask Shivaji Raj to specify the patient's name. Looking frantically around the room, he almost comes up with:

But luckily he translates the direction sign into Telugu. And so, 'Dhanush' was born.

Dhanush does his bit of bone breaking in the college & straightens everything out. But he's not entirely content with his new found life - free admission into a reputed college, a bungalow to chill out, a loving mother and a girl hotter than hell. Where in the world is that Sony home theater? Also, he's not having any recollections of his past days there. So he's still not at ease while getting fresh with Jyothi.

In the meantime, the co-passenger caught up in the accident at the beginning of the flick comes out of the coma. He exposes that the overtly philanthropic Dhanush was an overtly misanthropic Deva before his memory lapse. A bloody terrorist, more merciless than Telugu lyricists! So, Dhanush a k a Deva is arrested and tortured to disclose his partners in crime. Having lost his marbles, his newfound family, his girl and his elusive home theater, he is livid. Therefore, Dhanush escapes from the cops to clear up Deva's mess. 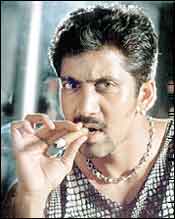 Eventually he busts the terrorist network but ends up in jail because the police believe that Dhanush is now Deva or that Deva is pretending to be Dhanush who himself has murdered a person, or that Dhanush is imitating Deva to intimidate them! Don't ask, just read.

ADVERTISEMENT
This page was tagged for
vadde naveen dhanush telugu full movie online watch
Dhanush telugu movie
Dhanush reviews
release date
Vadde Naveen, Kiran Gill
Follow @fullhyderabad
Follow fullhyd.com on
About Hyderabad
The Hyderabad Community
Improve fullhyd.com
More
Our Other Local Guides
Our other sites
© Copyright 1999-2009 LRR Technologies (Hyderabad), Pvt Ltd. All rights reserved. fullhyd, fullhyderabad, Welcome To The Neighbourhood are trademarks of LRR Technologies (Hyderabad) Pvt Ltd. The textual, graphic, audio and audiovisual material in this site is protected by copyright law. You may not copy, distribute, or use this material except as necessary for your personal, non-commercial use. Any trademarks are the properties of their respective owners. More on Hyderabad, India. Jobs in Hyderabad.